The old times that got forgotten 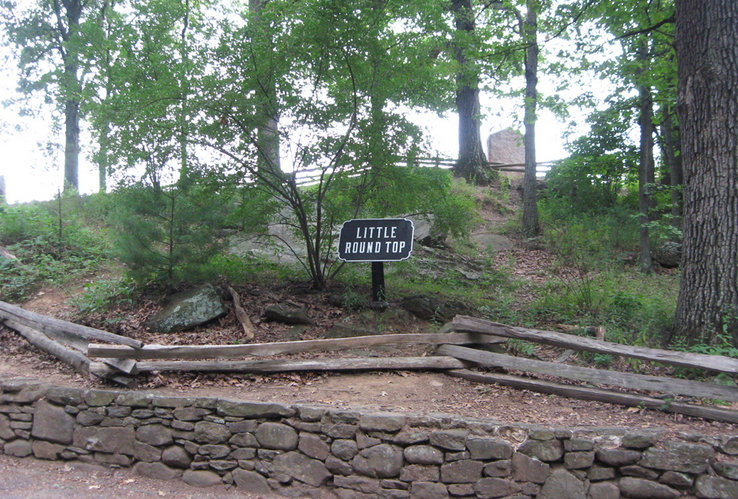 The summit of Little Round Top from the parking area

Highland Mills, NY — Driving around Maine listening to the flag news on the radio last week, I thought a lot about that famous engagement between the 15th Alabama and the 20th Maine.

I say famous. Considering how much misinformation has been bandied about by those on both sides of the “heritage” issue, it’s a good question how many would even know what that engagement was.

Just about everything that could be said about the Confederate battle flag, what it means and whether it should stay or go, has already been said. But there are a few things left to say about the war which gave it birth.

Many if not most of the men from both the units which faced each other on the afternoon of July 2, 1863, were the descendants of Ulster and Lowland Scots who came to America in the 1700s. Like the Irish Catholics who arrived in the next century, they came here in overcrowded ships because they were desperately poor. Somewhere in one of Bernard Bailyn’s books, he remarks that many of these immigrants arrived with the guns they intended to use on the English, their despised former landlords. 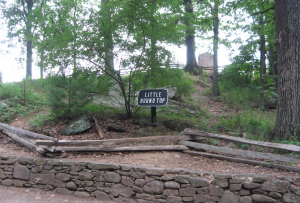 The summit of Little Round Top from the parking area

In a few years they did just that in the Revolutionary War. Not quite a century later, they were pitted against each other, on the second day of the Battle of Gettysburg, on the hill called Little Round Top.

History records how the men from southeast Alabama, hungry and in some cases shoeless, fought their way through heavy fire nearly to the top of the hill. And how Union Col. Joshua Chamberlain, his troops running out of ammunition, ordered the men of Maine to fix bayonets and charge downhill, carrying the day and turning the tide in the most famed battle of the war.

But here’s something history doesn’t dwell on as much as that heroic contest. In this and the many other battles it fought, the 15th Alabama lost 260 men killed in action. It lost nearly twice that many to disease, most of those in a measles epidemic in 1861. “It was no uncommon sight at that hospital to see six or seven corpses of 15th Alabama men laid out at once,” Capt. William Oates wrote.

Four months after Gettysburg, an ancestor of mine, 3rd Sgt. A. Washington Murdock of the 51st Georgia Volunteer Regiment, died, probably of smallpox, and was buried in a mass grave at the Union prison camp at Point Lookout, Md.

Descriptions of the conditions there sound every bit as hellish as the Confederate prison camp at Andersonville. Not as hellish as the concentration camps in which so many of my wife’s family died in World War II, but we are talking here about degrees of inhumanity. That it was all inhumane is beyond question.

No one ever reenacts a measles epidemic, or a food riot like the one staged by the starving women of Columbus in April, 1863. There’s nothing glorious about such things.

The women were hungry in part because wealthy planters ignored pleas to raise food crops and continued to raise cotton instead, because cotton fetched more money.

No one ever calls these planters traitors, although they left the widows and orphans of Confederate soldiers to starve. We don’t harbor any hostility toward the mossback Southern governors who rigidly opposed every railroad development scheme before the war, who resisted every attempt to build factories that would employ poor whites because they viewed this as a threat to the agricultural system based on black slavery. Yet these governors did more to insure the South’s defeat than Grant and Sherman combined.

Hardly anyone now remembers those wealthy Southerners, like George Fitzhugh, who thought slavery was such a splendid system that they wanted to extend it to poor whites as well as blacks. It might make those on both sides of the “heritage” debate uncomfortable to learn that Fitzhugh thought slavery to be “a form, and the very best form, of socialism.”

Three years and a day after Little Round Top, the Prussians defeated the Austrians at Koniggratz, a battle comparable in size to Gettysburg. A former Union general who was  an observer boasted that a single division of the Army of the Potomac could have broken the Prussian line.

Considering that the Prussians were better trained and far better armed, this sounds like empty bravado. But it was an early example of the glorification of the American Civil War which both sides engaged in after it was over. It was the greatest struggle, fought by the most valiant men and the most brilliant generals on the most hallowed fields of battle — on that, both sides agreed.

But it wasn’t. It was a miserable, diseased war, initiated by idiots, fought mostly by those who had the least to gain from it. It was not even the bloodiest American war of the 1860s, on a per capita basis (that was the Paraguayan War of 1864-1870).

So fly whatever flag you want in your front yard this July 3rd and 4th, and I will defend your right to do so. But let’s all remember Gen. William Tecumseh Sherman’s words, and remember them precisely.

“There is many a boy here today who looks on war as all glory, but boys, it is all hell,” Sherman said. All hell.

Thanks to Jane Thursby for her genealogical research.