The Physician as Moral Leader 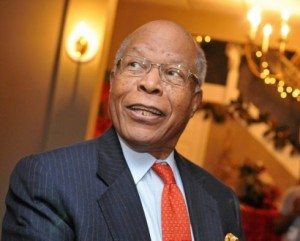 Not many people realize that the proposed health care reforms of the Clinton administration and President Obama’s national healthcare plan have roots in the term of a former African American Secretary of Health and Human Services who served under a Republican president. 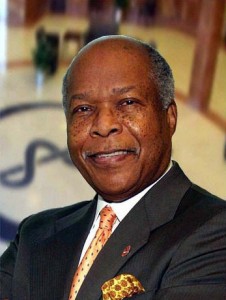 Dr. Louis W. Sullivan, a native of Blakely, Georgia, served as U.S. Secretary of Health and Human Services from 1989 to 1993.

That information is only one of the revelations to be found in Breaking Ground: My Life in Medicine (University of Georgia Press, 2014), coauthored by Dr. Louis W. Sullivan and David Chanoff.

Sullivan’s is a story that begins eight decades ago in the Jim Crow-dominated world of Atlanta and rural southwest Georgia — and a remarkable account of achievement it is. Sullivan’s father was a mortician in Blakely who dreamed of being a doctor, and his mother was a teacher.

His parents were not hesitant in expressing their belief in equal rights in a time when the Klan was a powerful and dangerous force in Georgia.

As a child, Louis shuttled between Blakely and friends’ homes in Atlanta, where he finished his schooling at Booker Washington High, graduating as salutatorian. From there he attended Morehouse College, influenced and guided by its legendary president, Benjamin E. Mays Jr.

Accepted at Boston University’s medical school, he earned his M.D. in 1958. During the coming years he laid the foundation for his brilliant career by teaching and practicing at Harvard, Seton Hall, and Boston universities. In time Sullivan discovered that the North, too, was not immune from the poison of racism, and his account of those years offers important insights gleaned from the struggles of a young black male navigating his way along the corridors of privilege, glimpsing and seizing opportunities to advance himself.

In his journeys north and south, the needs of the underserved were never far from view, as also was the relative absence of physicians of color and the obvious discrepancies that existed in the health and well-being of African Americans compared with the general population. At some point, one’s life begins to settle into a direction — and for Sullivan, at the age of 39, that direction was beginning to clarify.

By the time Sullivan returned home to Atlanta, in 1973, almost a century had passed since the last founding of a medical school at a historically black college (Meharry Medical College in 1876, preceded by Howard University’s College of Medicine in 1868). Despite the astronomical cost of building a modern college of medicine from the ground up, and the added challenge of securing accreditation, Sullivan envisioned the school as an affiliated program of Morehouse College, his alma mater.

Moving at lightning speed, he energized Morehouse’s alumni and friends, and by 1975 the program was up and running. In 1981 the Morehouse School of Medicine (MSM) had become an accredited and independently chartered institution, with Sullivan named its first president. A miracle had happened, against all odds.

From the start, the medical school’s mission was social equity and service: adding to the number of professional medical personnel of color in hospitals and clinics, and emphasizing community-based primary care that responded to the needs of the underserved throughout the state (67 percent of MSM’s graduates remain in Georgia, while the majority of the school’s clinical training and patient care takes place at Grady Memorial Hospital). 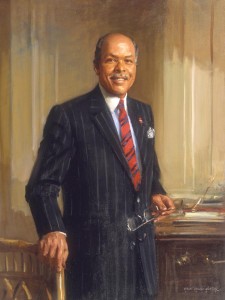 Dr. Louis W. Sullivan helped found the Morehouse School of Medicine, with a mission to increase the number of African American medical professionals in Georgia. Painting by Everett Raymond Kinstler.

In 1993 President George H. W. Bush tapped Sullivan to head the U.S. Department of Health and Human Services. There, the secretary quietly transformed the mission, programs, and leadership of the agency, taking it into an era of enhanced national service, research, and diverse representation. It was a truly creative time in the agency’s history, with many of the key provisions of the Affordable Healthcare Act of today originating in the policy studies and proposals of Sullivan’s Health and Human Services agency with the endorsement of a Republican president.

Sullivan’s return to Atlanta culminated a third (and continuing) saga in his career, when he resumed the presidency of the Morehouse Medical School (1993-2002), chaired the renowned Sullivan Commission of the W. K. Kellogg Foundation and Duke University School of Medicine that set societal benchmarks for fundamental change in health care distribution, and took part in projects that promoted AIDS research, pain diagnosis and its treatment, and funding for medical education in South Africa. He continues to write, lecture, and serve as a volunteer.

This memoir of Dr. Louis Sullivan is a national treasure, for it is about more than race, health care, politics, and education. In effective leaders there is vision. Equally important is a capacity for moral persuasion that can transform belief into a popular necessity. A keen intelligence has its place, too. Sullivan is blessed to have a supportive and popular partner, as his wife, Ginger Sullivan, certainly is. And on full display in the career of Louis Sullivan is his capacity for judgment, focus, and patience — rare but ever-important attributes in this world of nanosecond calculation and instant gratification.

A man of humble yet noble beginning, at the heart of this doctor’s story is a grand healing wish. Shining among the many stars of Georgia’s great men and women, his life and its purpose continue to illuminate, casting their humane light on our time.

Previous Article
Are You Ready to Buy your First Home?
Next Article
A campaign framed in disintegrating celluloid