The political rhetoric and financial reality of campaign money 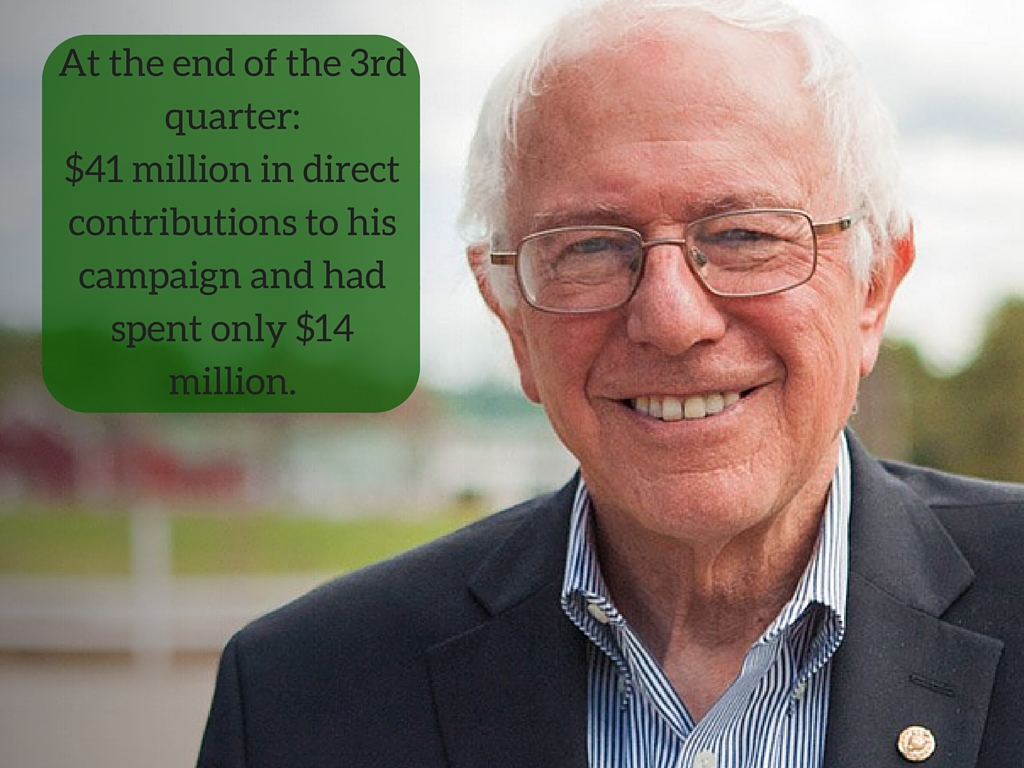 Campaign finance has become a big issue in the presidential race, with Democrat Bernie Sanders railing against the evil effects of the U.S. Supreme Court’s Citizens United ruling, and Republican Donald Trump baldly asserting himself as the only candidate in the field rich enough not to be bought. The latest round of campaign finance reports reveals an interesting counterpoint between this political rhetoric and financial reality.

Turns out Sanders is doing just fine in the fundraising department, by some measures better than anyone else. At the end of the third quarter he’d raised more than $41 million in direct contributions to his campaign and had spent only $14 million, giving him the best “burn rate” of any the candidates in either party. (This bears repeating: the only self-identified socialist in this race has so far managed his money more prudently than anybody else.)

Hillary Clinton has raised more but spent more, and more than $20 million of her money was raised by super PACs, which can buy television advertising and do other things that benefit her, but can’t coordinate their efforts with her campaign. The combined effect is that Sanders has nearly as much money to run his campaign as she does.

But Clinton’s problems in this regard are modest in comparison with Jeb Bush, who has raised by far the greatest amount of money of any of the candidates, but has had to cut salaries for more than 60 of his staff. That’s because more than $104 million of his money is in super PACs, leaving him with less money to pay his campaign bills than Dr. Ben Carson.

Bush’s predicament is in many ways a more eloquent testimonial to the problems caused by Citizens United, which opened the door for individuals, corporations and groups to pour unlimited amounts of money into super PACs, than any of Sanders’ fiery speeches.

Donald Trump has scoffed at the notion that the super PACs don’t collude with the campaigns, and in various ways they obviously do. But the result is still a grotesquely inefficient way of conducting political campaigns, in which far too much attention is paid to raising money that is restricted in the way it can be spent.

Who funds this system? The New York Times recently looked at 158 families who contributed $176 million as of the midyear reporting period for super PACs, nearly half of all the early money raised for the presidential campaign.

There is strikingly little old money on this list, and not a lot of corporate CEOs. There are a lot of people who struck it rich in oil and gas, quite a few names of people who founded their own companies, but more than anything else there are a staggering number of hedge fund managers, individual entrepreneurs who’ve made huge fortunes on Wall Street.

Under the old rules, wealthy political donors could max out their contributions to a number of campaigns, thereby spreading their influence. Now a computer-savvy small-donation campaign can surpass them in direct contributions, and the new class of high rollers makes it hard to compete for super PAC prestige. A recent story on Scott Walker’s wasted $20 million super PAC noted that a wealthy California contributor who had hosted a fundraiser for Walker had only contributed a “meager”
$2,500 to Walker’s super PAC.

What all this suggests is that the campaign finance system has become as much a means of social display for the nouveau riche as a rational system for the powerful to wield their influence. That’s not the fault Sanders finds with it, but it’s a fault nonetheless.

Speaking of which, what about Trump, too rich to be bought? Too canny to come out the loser, either. Trump has made a no-time-limit loan of $1.8 million to his campaign, contributed $100,000 directly — and received nearly $4 million in contributions. At the Trump Store in the Trump Tower lobby, they can’t keep his “Make America Great Again” trucker hat on the shelves.

But the real beauty of Trump’s campaign, from a financial viewpoint, is that he’s managed to catapult himself into a commanding lead in the Republican field at a fraction of the normal amount spent on campaign staff, fundraising costs and the like. Clinton has spent an eyepopping $43 million; Carson, $20 million; Bush, $14.4 million; even Sanders, $14 million. Trump has gotten where he is on $5.4 million. We don’t know yet whether he’s invested what he’ll need to run a good ground game when the caucuses and primaries start, but we can be pretty sure he isn’t going to walk away from this having spent too much for all the fun he’s had.

There’s a small army of campaign consultants, fundraising experts, media gurus and campaign pollsters out there waiting anxiously for the day when the Trump campaign has to lay down some serious money, but we’re not there yet.