The sinking Democratic Party in Georgia is bad news for everyone

By Guest Columnist JEFF ANDERSON, a 2010 Independent candidate for the U.S. House in Georgia’s 11th District from Acworth who heads the Anderson Center for American Policy Solutions

Georgia’s decade-and-a-half evolution into a Republican stronghold is more a story of tradition than transition.

While more than a prior century of identical Democratic dominance has surely been flipped on paper, even considering the modern demographic changes that have marked development of the New South, the general ideological character of this state’s voters really has not changed all that much.

Instead, at the level of the average Georgia citizen, this is more of a label-swapping story that centers on commercial quality issues with the two state political parties. Of real importance to each of us today is not that history, but the question of what are we getting (or more correctly, NOT getting) out of our one-party political condition?

While Georgia seems mostly content with its Republican identity, most citizens feel that as a state we are not nearly performing to the level of our desires nor our potential.

Consider this overarching concept — one that the moderate-to-conservative constituency of northwest metro Atlanta and northwest Georgia should easily understand and appreciate. Responsible marketplace competition promotes quality and value in ALL competitors.

In our political situation, where recent Democratic voting performance is rarely better than 40 percent and often below 30 percent (and where many Democratic candidate slots are often left unfilled), we don’t have that essential dynamic… No stone to sharpen stone; no steel to sharpen steel.

The natural answer for responsible Republicans to this undeniable shortcoming is not enhanced Democratic viability, but has been perhaps the idea of an occasional third-party or Independent challenge.

Yet there lies the rub. Georgia is perhaps the worst state in the nation for third-party politics. In fact, it’s so bad that our state operates under the constant threat of federal penalty and intervention for its treatment of elections, especially ballot access and conduct.

In practical truth, for all voting citizens in Georgia, you have only two legitimate sources for candidates in almost every race — the commercialized Republican and Democratic Parties.

Putting my neck on my own Democratic Party’s chopping block, I’m going to state my honest and studied opinion as a critical step toward our political recovery.

Democrats are in our unenviable minority position in Georgia today through much of our own fault. Comfortable in our political dominance, we dropped away from vibrant service to our citizenry. 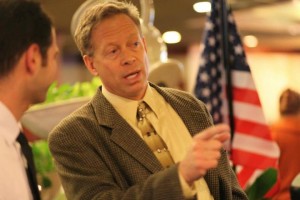 Looking to move themselves up in the national corporate structure, many of our state party officers over time slacked their allegiance to the principles and issues of Georgians and steered the Democratic Party of Georgia toward a mismatched National Democratic platform, inviting – if not prompting – Georgia’s Democratic voters to look “across the street” for a better fit.

Today, a crippled and dysfunctional Democratic Party of Georgia pushes noble candidates like Patrick Thompson in Georgia District 11, Danny Grant in Georgia District 14 and Jeffrey Kazanow in Georgia District 6 to run for the mere sake of being able to say to national officials “we have candidates”; but leave them with no tactical support, to be hammered and marginalized while making no relevant headway politically or in the public discussions of the issues.

This is not about Republicans who are just that much more “connected” or powerful or even more well-liked locally. This is about internal mismanagement of a damaged brand and about people externally, NEEDING that brand to be saved for their overall good. It’s also about the Georgia Republican Party walking away from you and your deepest service needs in exactly the same manner that the Democratic Party began to do two decades ago.

We absolutely do have work to do within the Democratic Party to formulate and represent a platform appropriate to our regional character.

We need to get out of a competitive “us against them” political mindset and focus on ALL Georgia citizens and how best to serve them. We must design and follow a campaign approach with new candidates that is suitable to our current position and reasonably promising to our gradual revival.

After all, like the U.S. government, the party should reflect and serve the people, not exist to market the people into accepting the party’s purposes.

My recommendation to ALL voters is to understand, accept and use the existing state landscape to your advantage in trying to restore good government now.

Recognize that your reasonable candidate choices are going to largely be only two in any given race — one labeled “Republican” and one labeled “Democrat.” Exercise your free Constitutional voice and your voting independence to support and push the type of candidates YOU want through those political pipelines.

And here in Georgia, invest responsibly and wisely in restoring one of those essential pipelines, the Democratic Party of Georgia, to serviceable condition.