This three-part series will look back in the past, reflect on the present and see what kind of future Atlanta’s oldest shopping mall has to offer.

Greenbriar Mall has been a nucleus for Atlanta culture for over 56 years and everyone who has visited has a story.

Sherry Williams is a long-time patron of Greenbriar who remembers working at the lunch counter at Lenox Square when she was in high school. Instead of spending her money at the shopping center that she worked in, she would go to her neighborhood mall and shop at J.P. Allen and at least three shoe stores.

“My parents did not give me an allowance,” said Williams, who told SaportaReport that she would have to get a job if she wanted spending money.

Atlanta native Kimberly Edwards Beal remembers trying to keep up with her mom down the long corridors on their way to Buster Brown and then eating at Piccadilly’s for dinner afterward.

“We went to the library in the basement and then across the hall to the movie theater,” said Beal, “and I loved going to the frozen yogurt shop and getting snacks downstairs at the counter in Davison’s.”

It seems that most Atlantans have a fond memory of Greenbriar.

Greenbriar was inside of Keisha Lance Bottoms’ district when she was councilwoman before becoming mayor and has many great memories.

She told the Atlanta Journal-Constitution earlier this year, “The meeting point was always either Macy’s (Davison’s), JC Penny (on the other end), or in the middle at the movie ticket booth.”

Greenbriar was EVERYTHING when I grew up. It’s where we shopped, went to the movies, had dinner (Piccadilly was my dad’s favorite), and hung out as teenagers.

The mall has even been the inspiration for many hip-hop artists through the years. Atlanta’s own Ludacris, T.I. and many more put Greenbriar on the map when they mentioned the times they would hit the mall for new clothes, shoes and hitting on the ladies.

It was there that producer Jermaine Dupri found two kids, both named Chris, called them Kris Kross and took them into stardom.

And we can’t forget to thank Greenbriar for introducing the first original fried chicken sandwich for only fifty-nine cents when Chick-fil-a opened its doors in the food court in 1967. It was founder Truett Cathy who made Greenbriar his first location for the fast-food company and began the concept of in-mall restaurants before franchising to other food courts all over the South and eventually nationwide. 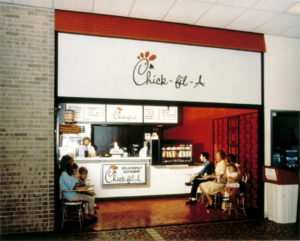 Throughout the years, what made the mall were the retail stores like Circuit City, Burlington Coat Factory and Rich’s (later known as Macy’s) that brought people from all over the metro area to its doors.

In the mid-90s, Greenbriar had a big draw when NBA Hall-of-Famer, Magic Johnson, brought his famous Magic Johnson Theater as an out parcel of the parking lot. 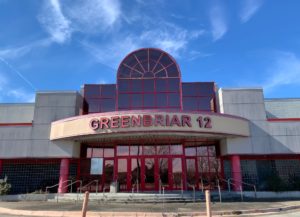 Entrance of what use to be The Magic Johnson Theater located outside of Greenbriar Mall. Credit: Kelly Jordan

Johnson’s focus for the chain was to build first-rate multiplexes in urban communities like the Campbellton Road corridor where Greenbriar resides.

The theater’s revenue was a much-needed boost for the beloved mall as sales and shopping appeal started to decline.

This is part one of a three-part series that will explain the history, present and future of Greenbriar Mall.

What’s your favorite memory of Greenbriar Mall? Let us know in the comments or send me an email at Allison@SaportaReport.com

Share
Tweet
Share
Pin
Pocket
WhatsApp
Buffer5
Email
Reddit
5 Shares
Tags:
Previous Article
The Power of Strengthening Your Child’s Mental Health Due to the Pandemic
Next Article
Duncan looks ahead to GOP 2.0, as Big Money looks for a political home