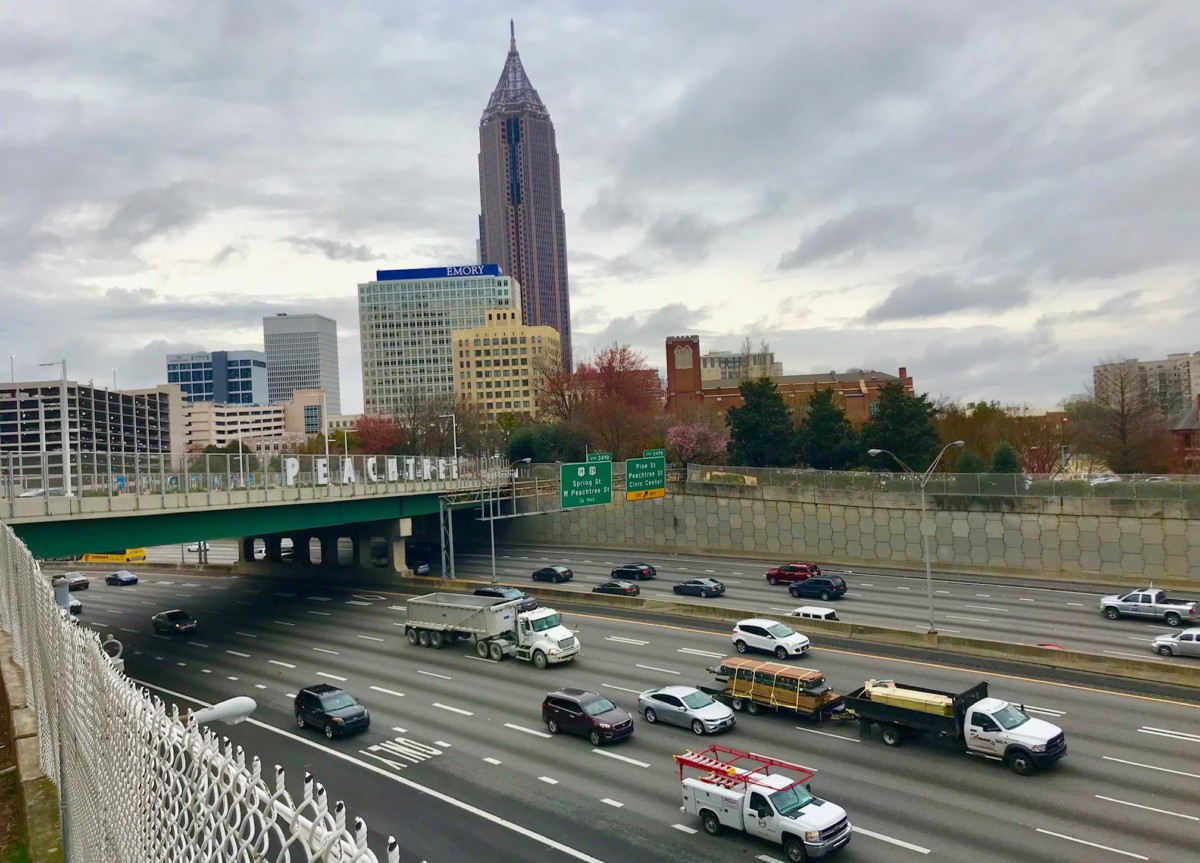 Ever since the Atlanta region began carving the city apart with highways in the 1950s and 1960s, civic leaders have explored ways to reconnect the disjointed areas by bridging over our interstates.

In 1981, the late Atlanta Mayor Maynard Jackson was about to end his second term in office. President Jimmy Carter, who had just lost re-election, was looking for the right place to build his presidential library. 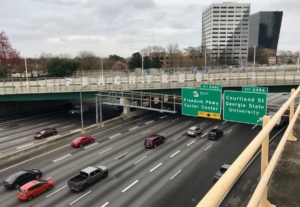 Jackson made an ambitious proposal. He urged the former president to build the Carter Library and the Carter Center on top of the Downtown Connector – bridging communities that had been destroyed by the construction of the freeway. Instead of heeding that advice, Carter decided to build on land that had been set aside for the defeated Stone Mountain Tollway.

But he needed automobile access to the Carter Center, so that reopened the painful debate that resulted in the building of the Presidential Parkway. Once again, the anti-road activists were pitted against those wanting to build a parkway to serve the proposed Carter Center.

Looking back, building the Carter Center over the Downtown Connector would have spoken volumes about President Carter. It would have brought together black and white communities, and it would have re-stitched the divided downtown area with neighborhoods and the Sweet Auburn retail district.

Over the decades, we have seen a myriad of proposals to build over our interstate system as a way of reweaving the fabric of our city before highways tore us apart.

The late developer Kim King wanted to build a major platform between Fifth and 10thstreets (and ended up with a wider Fifth Street bridge).

The Buckhead Community Improvement District has proposed building a winding park over Georgia 400 north of Peachtree to provide needed green-space to the office, commercial and residential area.

Chick-fil-A CEO Dan Cathy is exploring the possibility of building a park over the Downtown Connector around North Avenue.

For the past couple of years, Central Atlanta Progress has been proposing that Atlanta invest in “the Stitch” – building a park-like platform over the Downtown Connector from the Civic Center MARTA Station south to the area where Maynard Jackson had wanted to build the Carter Library. 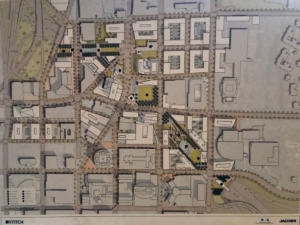 Map showing the four blocks that could be part of “the Stitch” project. The map shows the Civic Center MARTA Station on the left side and the now vacant Civic Center on the right (Special: Central Atlanta Progress)

“CAP has a history of thinking big,” said Jennifer Ball, CAP’s vice president of planning and economic development. “The Stitch is the next chapter in that opportunity.”

A highly-respected panel put together by the Urban Land Institute brought together nine national leaders – urban planners, landscape architects, economic development professionals and community advocates – to take a serious look at the possibility of building “the Stitch.” The group spent five days interviewing dozens of people, studying maps, reviewing project feasibility and learning about the community and its history.

James Lima, a New York planner and development professional, chaired the ULI panel, which presented its findings and recommendations on March 1 at St. Luke’s Episcopal Church.

“Atlanta is competing for quality of life experiences. It’s about being competitive in an increasingly competitive marketplace,” Lima said. “The creation of a fantastic park is an opportunity to generate wealth and value.”

Lima said the panel believed that building out Blocks 3 and 4 made the greatest sense. It would add about 5 acres of a new park that would bridge that area together. It would be about the size of Klyde Warren Park in Dallas, Texas, which is one of the best examples of a city bridging over an interstate. 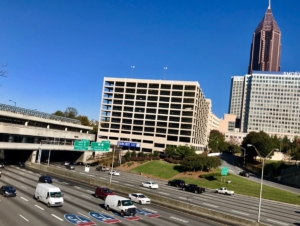 Kathryn Firth, a Boston-based architect, said Atlanta should make the Civic Center MARTA Station as its “center gravity.” She called the area around the station “sad,” but it could be made more hospitable with better streetscapes as well as working with MARTA to encourage transit-oriented developments along a bridged expressway.

“If you have leadership and a shared vision, the money will follow,” Lima said.

Glenn LaRue Smith, a Washington, D.C.-based landscape architect and urban planner, said the community needed to galvanize itself behind the idea.
“We didn’t hear a shared vision uniting Atlanta,” Smith said, adding that the elephant in the room was race. “The Stitch should reflect Atlanta and Atlantans. It should reveal your lost history. Use art to tell your story. There is richness here that can become part of the public art.”

Specifically, Smith talked about Buttermilk Bottoms, the depressed black neighborhood (often referred to as a slum) that existed until the Downtown Connector and the Civic Center were built.

A personal aside: my father used to drive me and my sister around different parts of Atlanta – including Buttermilk Bottoms – so we could have a better appreciation of other people and the lives they lived. Obviously, the residents would have been far better off if civic leaders 60 years ago had worked with the community to improve their lives and their homes instead of obliterating their whole neighborhood. 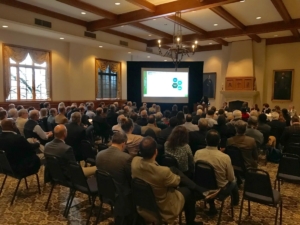 A full house of interested citizens attend the ULI panel discussion on “the Stitch” at St. Luke’s (Photo by Kelly Jordan)

Again, the Stitch could be an opportunity to bridge the divide that has separated our town – racially and economically – through time and space.

CAP President A.J. Robinson said he wants to be sure the Stitch extends to Peachtree Street. St. Luke’s could be a key player because it has acquired several acres of land around the church, and it has always been sensitive to the issues of housing affordability, the homeless and social services.

“We wanted to be as expansive and aspirational as we could be,” Robinson said. “This is a great start. There’s a lot of desire to do something with the Civic Center MARTA Station. It makes a lot of sense.”

What doesn’t make sense are the current plans to widen Georgia 400 – creating an even wider divide between the communities east and west of the state highway in North Fulton County. This column will analyze and critique those plans in a future column. 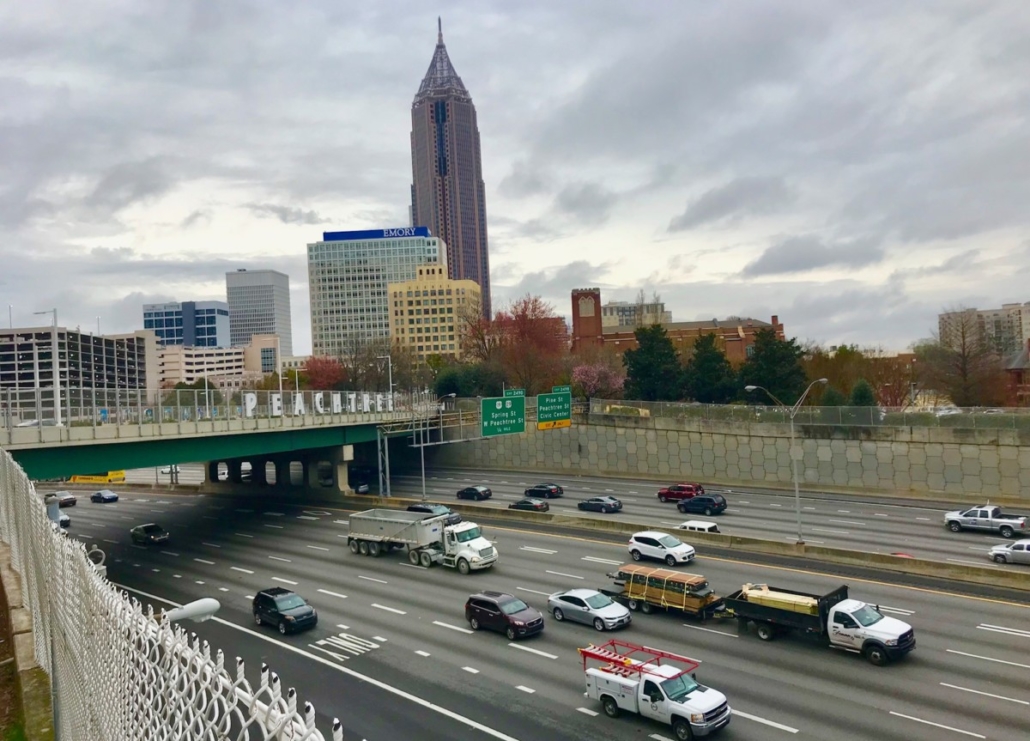 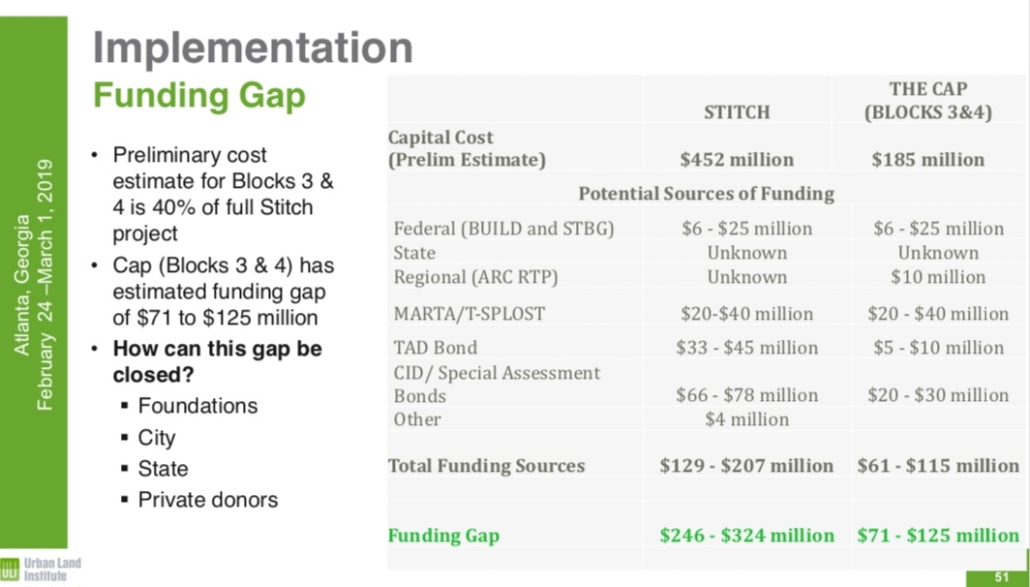 A chart with cost estimates of the different proposals for “the Stitch” (Source: ULI panel presentation) 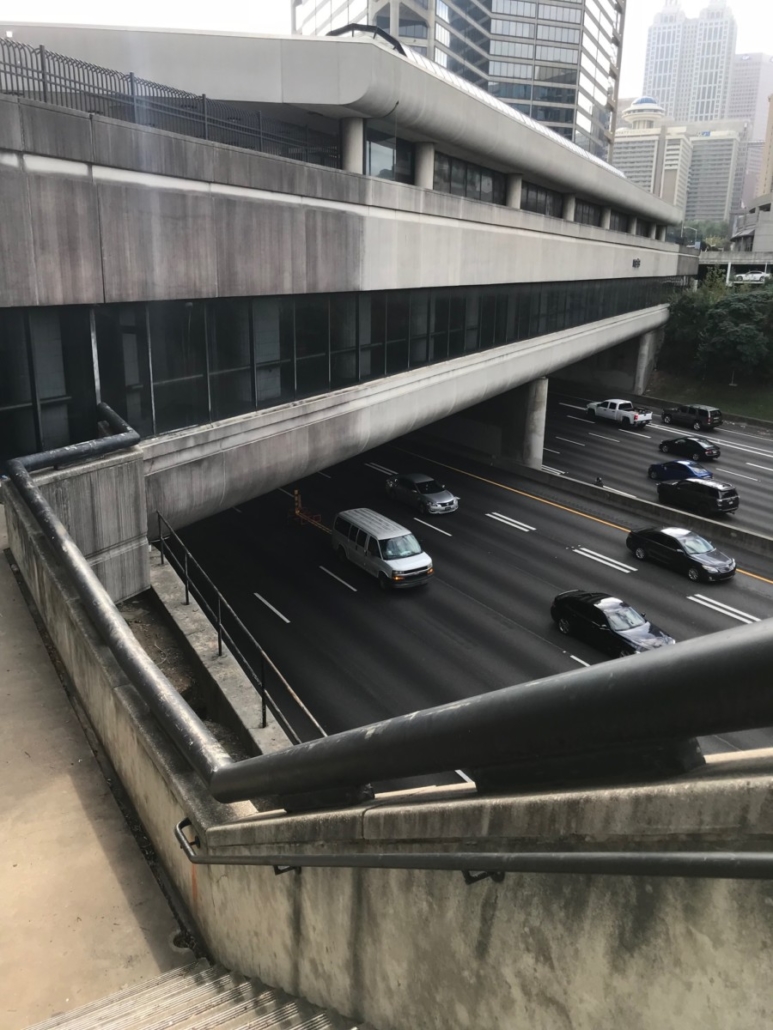