The surrender of Atlanta — a Civil War story of universal significance 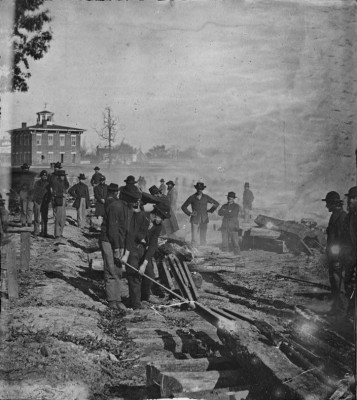 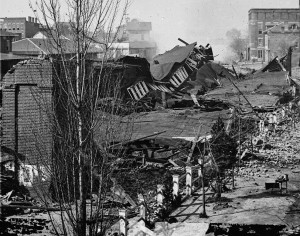 Atlanta’s Union Station was demolished in 1864 by Federal troops.

In 2014 the city is commemorating the 150th anniversary of the Battle of Atlanta. Certainly most of us are familiar with the devastation that Sherman visited on Atlanta and the surrounding area in his campaign to deal a lasting blow to the Confederacy.

Less familiar, and almost entirely unknown until recent years, thanks to the work of the late University of Georgia historian Thomas G. Dyer (see Secret Yankees: The Union Circle in Confederate Atlanta), are the circumstances of the city’s surrender and the composition of the surrender delegation.

Let’s look back to that day on September 2, 1864. It is a Friday. For weeks the city has endured endless shelling. The sky is billowy and dark with smoke from burning warehouses and rail yards set fire by retreating Confederate troops. To residents, there is a hint of the apocalypse. 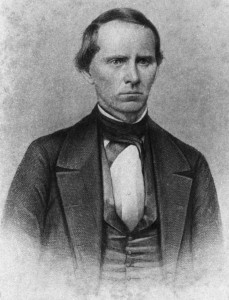 By composing his peace delegation of a slave alongside Unionist sympathizers, Atlanta mayor James Calhoun signaled to the advancing Northern army that Atlanta was not just any Southern city.

The city’s mayor is James M. Calhoun, a South Carolina native who came to Georgia as a child. Before Georgia’s secession Calhoun was known for being pro-Unionist, as many were. With secession, he walked a careful line to avoid charges of treason. Trusted and admired by many, he served as the city’s mayor throughout the four years of the Civil War.

When he learned that the Yankees were spotted coming down Marietta Road into the city, he hastily organized a peace delegation composed of residents already known for their Unionist sympathies. One of those was Bob Yancey.

What was unusual about Yancey’s presence in the delegation — and the likely explanation for his failure to appear in standard accounts — was that he was a mulatto slave. He was, however, a slave who was allowed to rent himself out. He earned this degree of independence and liberty by paying his owner (Ben Yancey of Athens) a share of his monthly earnings, a master-slave financial arrangement that was not especially unusual in Atlanta.

Bob Yancey and Calhoun were already well acquainted. A successful businessman in the city, Yancey owned two establishments that employed nine people. He also made loans to white merchants (including his master) and owned his own house outright, where he lived with his wife. The mayor and Yancey enjoyed a mutual respect. 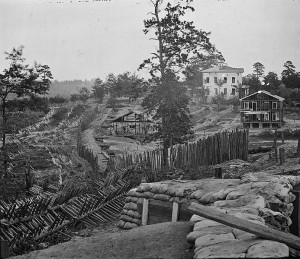 The surrender of Atlanta took place near this area. Mayor Calhoun and his delegation met the Federal troops on horseback.

As the mayor’s peace delegation snaked its way on horseback from Five Points north along war-torn Marietta Road, everyone in the party surely understood that Bob Yancey was about to become a free man. Riding out to greet the Yankees with a black man at his side, not as a servant but as an equal, was a smart negotiating tactic; by composing his delegation of a slave alongside Unionist sympathizers, Calhoun showed himself to be a shrewd politician, signaling to the advancing Northern army that Atlanta was not just any Southern city.

They finally met General Sherman’s advancing troops at the intersection of what today is Marietta Street and Northside Drive (Sherman himself was actually south of the city, near Jonesboro). There, Calhoun officially surrendered Atlanta. He asked only for protection of the city’s inhabitants and private property.

And at that same moment Bob Yancey became a free man. His first act was to take the name he believed was his by birthright: Robert Webster.

Yancey had long claimed to be the son of Massachusetts senator Daniel Webster. According to Dyer, he very likely was. We know that Webster owned Bob’s mother, a slave, who worked as a cook in the senator’s Washington quarters. It was she who told Bob that the senator was his father. Indeed, rumors of Webster’s peccadillos were rife in Washington and also in his hometown of Marshfield, Massachusetts. By the time the Yancey family took ownership of “Bob” in Richmond, the rumor of his paternity was general knowledge.

One of Bob Yancey’s earliest childhood memories is that of visiting his “father” in the senate chambers. Dyer tracked the story down to the official logs of the senate doorkeeper (Isaac Bassett), and these seem to confirm that a young “colored boy” named Bob, claiming to be the senator’s son, frequently visited.

This tangled web gets still more tangled. The father of the pro-Unionist mayor James Calhoun was a cousin of South Carolina senator John C. Calhoun, the patriarch of states’ rights and slavery. And Yancey’s owner, Ben, was the brother of none other than the South’s foremost secessionist, William Lowndes Yancey. 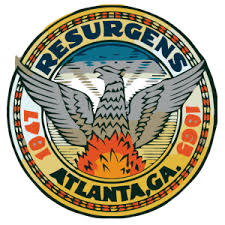 The Atlanta seal depicts the resurgens, or rebirth, dream.

What a trick history is playing on us. At that moment of surrender on Marietta Road, one can glimpse in these two men all the confusions and symbols of this fratricidal war: North and South, black and white, pro-Unionist and anti-Unionist, free and unfree, kith and kin. Indeed, South is North and North is South.

A city too busy to hate is also a practical city with its eyes ever open, looking to the horizon for change, for new possibilities, for new relationships. That’s one meaning of the story of Atlanta’s surrender, and most especially the stories of the mayor and Robert Webster, the slave who probably was the son of the nation’s most eminent statesman and for a time, a highly successful businessman in his own right.

I also look back on this story with sadness, knowing that the progress Robert Webster hoped for would pass him by. He drops out of the record by 1880, unacknowledged and unremembered.

We do not live in a perfect world. Nor is this a perfect place. But the arc of Webster’s story is ultimately a hopeful one, for it is part of the still-unfolding resurgens dream born out of the ashes of September 2, 1864. The world will eagerly come to an inspirational city that knows how to tell its stories of universal significance, stories that weave us together as a city, as a South, as a nation, and as a world. It is good to not forget our own past. It is good to remember Robert Webster.

Previous Article
First-time Homebuyers: Make Foresight 20/20
Next Article
A shooting in August, and the horizontal spread of urban blight