If you’ve ever enjoyed a walk down a tree-lined Midtown sidewalk, used a trash or recycling bin at one of our intersections or enjoyed an afternoon day on a bench along Peachtree, you’ve enjoyed the work of one of our most important, and most overlooked, programs — Midtown Green.

Because Midtown Green’s efforts take place largely behind the scenes, they aren’t always as immediately noticeable as the high rises under construction, streetscape improvements or other happenings in the district. But the fact that you don’t notice them means that they’re going above and beyond to make Midtown a great place to be.

As a supplement to City of Atlanta’s services, the team helps keep Midtown clean and beautiful by picking up litter, emptying trash and recycling cans, landscaping, removing graffiti and more. It also fields questions for City of Atlanta 311 requests and works to get resolution on matters Midtown Alliance does not handle, such as working closely with the Department of Public Works to expedite repairs of malfunctioning streetlights. 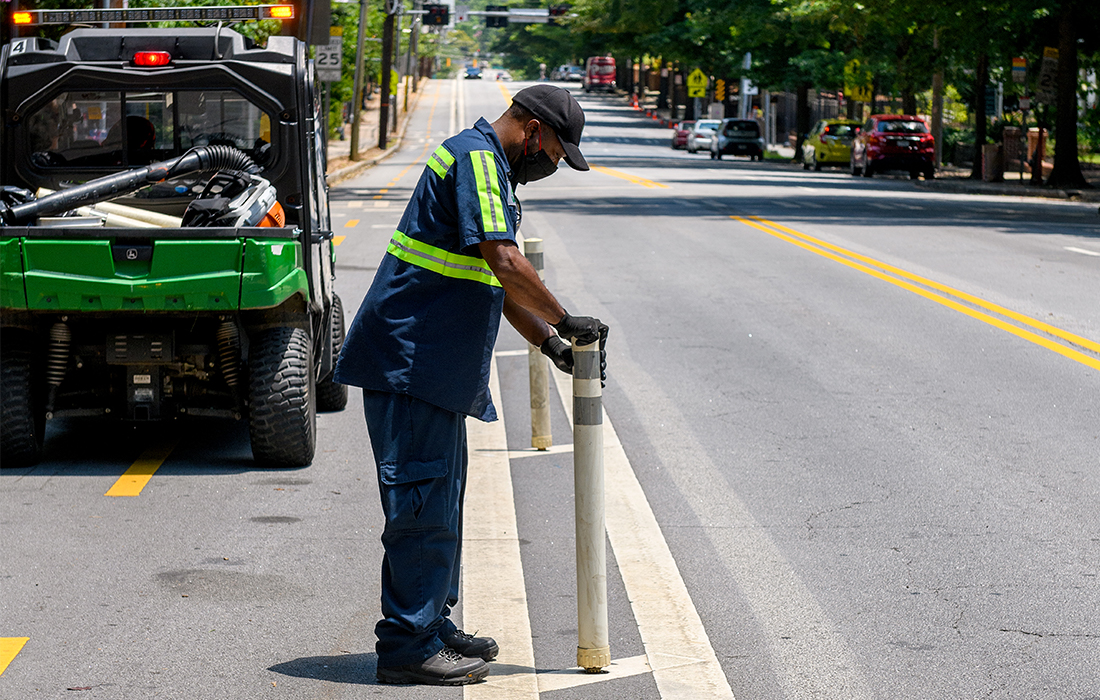 The team also holds utility contractors accountable for cutting into pavement when the work is not done to city standards, aligning with City Department of Public Works inspectors to make sure the contractors put everything back the way they found it.

The current staff of 10, Green Team members, plus contractors, get a remarkable amount accomplished in a 1.1 square mile district with 20,000 residents.

In 2019, Midtown Green picked up 261K pounds of debris and cleaned up more than 1,150 instances of graffiti and stickers. It maintained and planted 30K total square feet of plazas and medians, as well as several acres of park space and greenways. This includes taking care of more than 2,500 street trees, including planting, pruning, nutrition and replacement. Members of the team are even specially trained to help trees withstand specific challenges of an urban location.

This year, Midtown Green’s work is more important than ever. The amount of trash in the Midtown Improvement District has doubled, and due to the COVID-19 pandemic our staff has stepped up its disinfecting and sanitation efforts on high-touch surface areas. 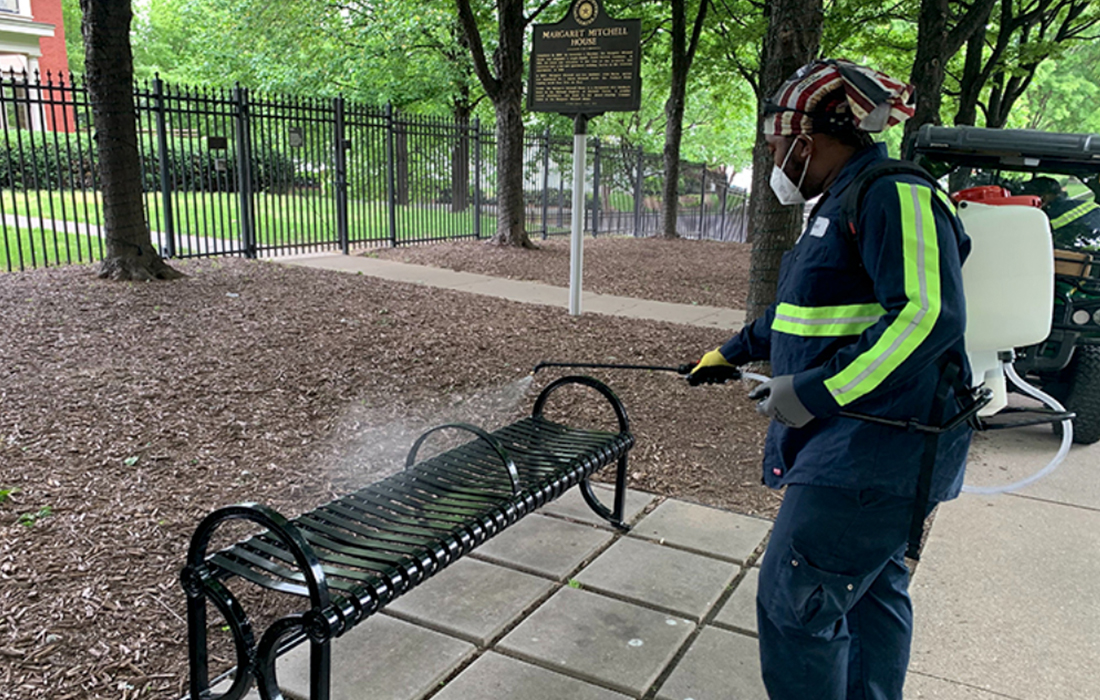 Now that autumn has officially arrived, Midtown Green is adding leaf removal from sidewalks and gutters to their task list. Plants that have been damaged or died will be replaced, and seasonal flowers will be planted in medians and public space throughout the district.

The team performs difficult tasks outdoors during all seasons, and too often they are unsung heroes because of the nature and timing of their work. But if you’re up for an early morning walk through Midtown, be on the lookout for members of our team who come from vast and varied backgrounds. 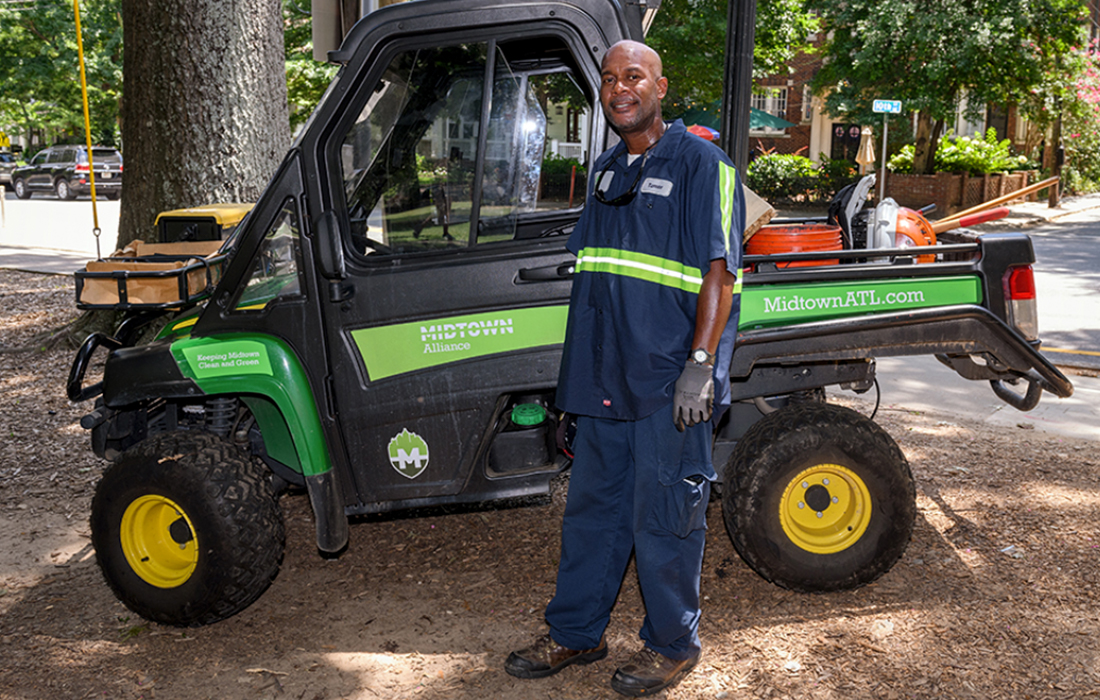 Andre Turner worked for an airline before joining Midtown Green in 2007. As one of our staff’s longest tenured employees, he has watched crumbling buildings be replaced with high rises and public plazas be created from formerly uninviting spaces. The team also includes a youth football coach, an Army veteran from the Republic of Vietnam and a former camera support worker in the TV and film industry who specialized in action scenes. 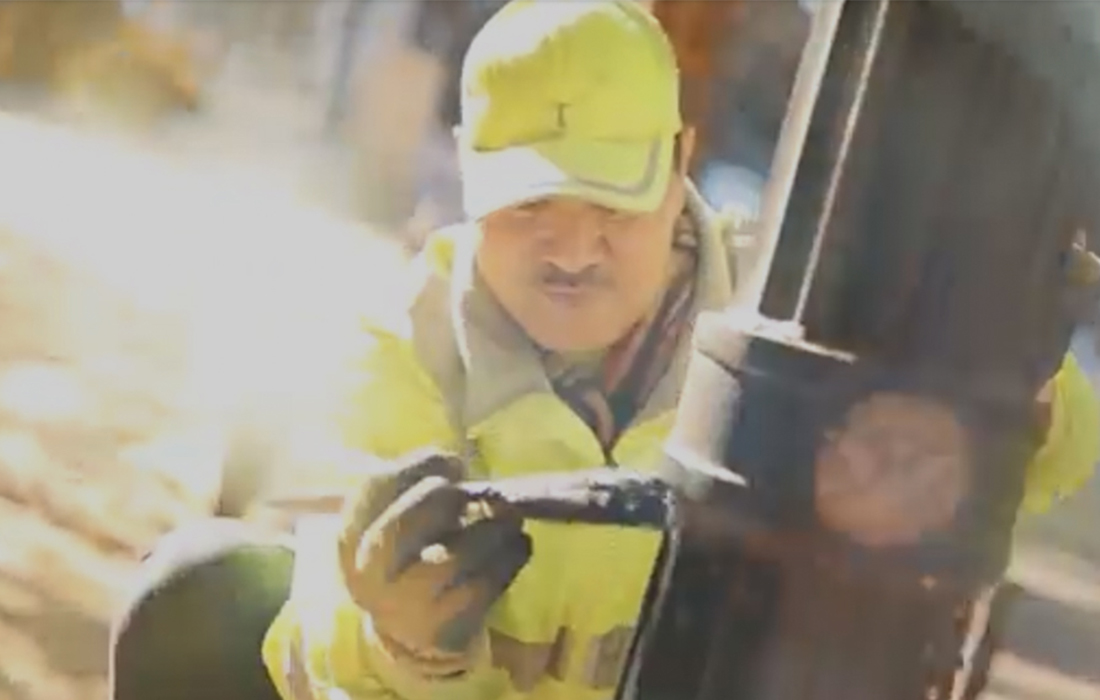 We’re grateful for Midtown Green’s essential work that makes the district a more beautiful place to live, work and play.

If you’re interested in helping keep Midtown beautiful, now’s your chance. Midtown Green is currently hiring. Please share this job opportunity with people you know to help us grow our team.