The view from Brasstown Bald 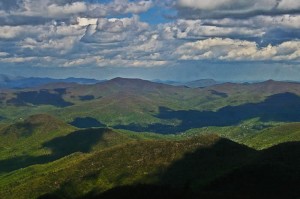 View from Brasstown Bald. Credit: Cradle of Forestry in America.org

Eleven of Georgia’s 159 counties are tucked in the northeast corner of the state, where the history and culture of the land is inseparable from the mountains. There, the Appalachian mountain chain and the trail by the same name begin their long journey northward to Maine.

From atop Georgia’s highest point, Brasstown Bald, the eye looks out on the intersection of four states, with their tree-covered cliffs, knobs, creeks, and rivers, as well as the ever-present vultures tracing lazy circles in the sky. It is chilly here, even in the summer, and the cat’s paw gusting is a reminder of the total absence of windbreaks.

The sense of space one breathes in is transporting. Surely, for eons, other humans standing on this very rock experienced similar sensations. What did it mean to them? For those rooted in the soil that also sustained their lives, what spirits, what myths and stories did this land induce? For the Cherokee, in a legend similar to that of Noah and the ark, Brasstown Bald is mythologized as the last resting place in a giant flood that left the land underwater.

At any time of the year, it is hard not to fall in love with a majestic place whose names are monuments to the Creek and Cherokee. Georgia’s former poet laureate, Bettie Sellers (1926–2013), who lived in the small town of Young Harris in Towns County, imagined in her poetry those native forebears “fishing the Hiwassee and Chatuge / Hunting Salali the squirrel / and Awanita, the young deer.” Beneath her feet were “stone footprints on Trackrock / and arrowheads in my garden soil.”

One of the state’s great poets, Byron Herbert Reece (1917–58), born and raised in these mountains, wrote novels and poems as sacraments to place. They tell of the ruggedness and at times, violence, of life that was a shaping force for the region’s settlers. For Reece, a farmer in Union County as well as an educator at Young Harris College, the beauty of the land that turned with the seasons was inseparable from the wearying challenge of forcing a life and living from it. Being “of” the land, he believed, also meant sorrows and toils, and a close acquaintance both with the evil and the goodness of human character.

For Reece, the journey and triumphs of the human spirit were fed by the mountains and valleys’ wild natural beauty that impressed so deeply on his imagination. In language tinged with biblical overtones, he wrote of spring as a “staining” time, a season when “mysterious tints” cast a “ghost of color, a smoke of young green” that “heralded resurrection.” But even these triumphs could give way to the valleys of human despair: suffering from tuberculosis, he took his life at the age of 41.

Perhaps one of the best-known Georgians to come from the state’s mountain region is former governor Zell Miller. Author of The Mountains within Me, as well as other works, Miller, ever the historian, wrote of the Choestoe (“The place of the dancing rabbits”) and Young Harris valleys of Union and Towns counties. Like Reece’s family, Miller’s ancestors first settled in the area after the Cherokee land cession of 1835. His father was a member of the Young Harris College faculty, in the town of the same name. Later in life, before his political career took off, Miller too (the holder of bachelor’s and master’s degrees in history from the University of Georgia) would teach at the college.

Not surprisingly, Miller’s path as a young boy crossed with that of Reece’s. With his uncle he would often visit the Reece household, and recalls being “drawn to this intelligent and mild mannered man.” As appreciative as Miller is of Reece’s cultural and intellectual attainments, most impressive of all to him was Reece’s “skill with a mule and knowledge of nature” — a reminder of the necessity of survival skills when extracting a living from the wilderness.

Autumn is a perfect time of the year to visit north Georgia, deep in scenic beauty, state parks, falls, and trails — brought closer by a highway system (SR 515, also known as Zell Miller Mountain Parkway) built during Miller’s term as governor. See (and hike) Blood Mountain, so-named by the Cherokee, and visit Mountain Crossings of Walasi-yi (or Neel Gap), also of Cherokee linguistic origin and the location of an outfitter, of Civilian Conservation Corps vintage, for hikers and through which passes — literally — the Appalachian Trail. Not far from here is the terminus of the Appalachian Trail at Springer Mountain.

Accessible by the same highway is the restored Byron Herbert Reece Farm and Heritage Center and Vogel State Park. Farther up the road is historic Blairsville, and from there it’s an easy ride to the tiny community of Young Harris and its college, where Miller was raised (and still lives) and where Sellers wrote of the valley’s vistas and heritage. You can drive to the top of Brasstown Bald, but from the college you can also hike the old Wagon Train Trail to the parking lot near the mountain’s top.

And don’t forget to take your online New Georgia Encyclopedia with you!