There is no turning back the demands for justice voiced by some demonstrators who marched June 13 in Downtown Atlanta, the author contends. Credit: Kelly Jordan
Share20
Tweet
Share
Pin
Pocket
WhatsApp
Buffer5
Email
Reddit
25 Shares

By Guest Columnist FELICIA A. MOORE, president of the Atlanta City Council

Like many people excited to ring in the new year, I also referred to the year 2020 as the year of “perfect vision.” This year we would see clearly, with a perfect line of sight toward our expected outcomes. The elders of my generation often say, “Be careful what you wish for … you just might get it.” 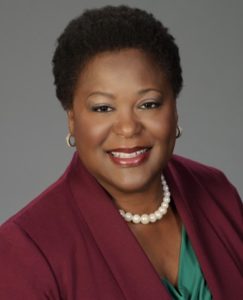 The universe responded to our declarations and we are now forced to admit what 20/20 vision has always been, and why maintaining it must be our goal not just this year, but always.

This definition provides an appropriate context for the dynamics we have witnessed across our country over the past weeks. The issues of racism, bias within the criminal justice system, and police brutality as experienced by African Americans are not new problems – we always see it and do our best to live through it every day. 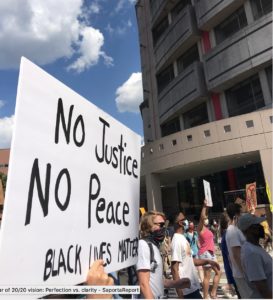 However, society at-large and the systems upon which it operates have long refused to see what should normally be seen at the prescribed distance. Turning a blind eye to injustice is what brought us to this tipping point. It is my belief that there is no turning back.

For generations, America has been shielded from the visual evidence of injustice. There was no consistent and reliable means of validating the cries of minorities claiming that perhaps we are not as free as we would like to think. Then, the scales began to shift. The advent of technology opened vistas that could not be closed.

Footage and photos from camera phones, police body cameras, and security cameras began to flood our consciousness with images of racist acts, police brutality, and a criminal justice system that often failed to hold the perpetrators accountable. The impact of these images was compounded by the Internet and social media, which made distribution rapid and widespread.

The world should not have been able to continue in its denial of these issues, but it did. The denial continued until May 2020 when we watched a video depicting the murder of George Floyd (a 46-year old Black man) at the knee of a White Minnesota police officer while his colleagues stood by in complicity. The video shook, and continues to shake, our country and the world. Now, we all must admit to having 20/20 vision. 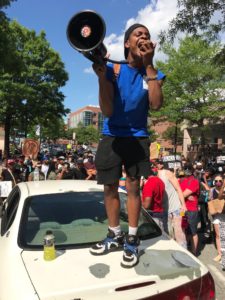 The calls to redress systemic injustices resonate across the generations, the author observes – Baby Boomers, Generation X, Millennials and Gen Z are all calling for change, as did this demonstrator in Downtown Atlanta on June 12. Credit: Kelly Jordan

The murder of George Floyd certainly was not the first or only travesty of justice witnessed in recent times; however, it has proven to be one of the most catalytic. In response to his murder, the world has seen a cross-section of society galvanize in protest. We have seen Baby Boomers and Generation X rise up, having shouted from the rooftops for decades that these systemic issues existed and needed to be addressed. Our younger adults and youth, Millennials and Generation Z, have even demonstrated that they will not be relegated to the sidelines. Across the globe, people of all nationalities, ethnicities, and socioeconomic status have come together with the understanding that this is a pivotal moment in history. Each one of us must now decide … what do we do with it?

Everyone has a part to play in developing solutions and we must allow each entity to make their unique contribution without judgment. We must also personally commit to peaceful and non-violent resistance so as not to distract from the message of change. I challenge every individual to get within 20 feet of the problem within your sphere of influence, acknowledge it with clarity, and attack it strategically until the positive changes which will bring forth justice for all are manifest. 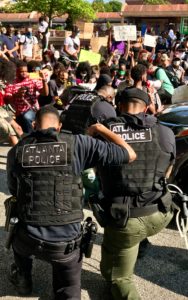 In the City of Atlanta, we are fortunate to have a police department which, though not perfect, is filled with great human beings who daily lay their lives on the line in the interest of public safety. However, we can still do better. It is time to review the operations of the Atlanta Police Department and refashion how we recruit, train, and manage the performance of our officers.

We have made strides toward implementing the policies of 21st Century Policing but we must ensure its complete implementation. It is critical that we establish trust between our communities and law enforcement officers – possessing the courage to admit that both sides really are afraid of one another, with good reason. The time has come to replace fear with understanding, exchange inhumanity for humanity, and eradicate injustice in every corner of our society.

We must be honest with ourselves – we never had a vision problem – our problem is the lack of responsibility and accountability. Perhaps we attempted to move more than 20 feet away from the problem, thinking distance would equal protection. Some of us may have put on our blinders, hoping that the problems would go away if we ignored them. Then there are those who simply turned away, deciding to leave society’s ills for someone else to handle.

Well, there is now nowhere left to hide from racism, bias within our criminal justice system, and police brutality, for the images we have repeatedly seen are inescapable. If nothing else, the year 2020 has guaranteed that these images and the protests responsive to them will never leave our minds. Let’s look these problems straight in the eyes with clarity – and together, fix them.