The Georgia Conservancy continues to express serious concerns regarding a proposed heavy mineral mine near the edge of the Okefenokee National Wildlife Refuge in southeast Georgia.

In late 2020, the U.S. Army Corps of Engineers (USACE) announced that under the Trump Administration’s recently-adapted Clean Water Act guidance, the 400+ acres of wetlands the Phase 1 mining area would no longer fall under Federal regulations.Though this guidance has been challenged in a recent Federal court ruling, there is currently minimal Federal oversight of the proposed project, placing primary responsibility for permits with the Georgia Environmental Protection Division and Charlton County.

This change in oversight highlights the important advocacy role that the Georgia Conservancy, our members, and our partners have at the state and local levels.

In the meantime, the Georgia Conservancy has expressed our concerns to the Georgia EPD in a Spring 2021 letter, and we encourage all those in opposition to the mining project to voice their concerns as well.

In Georgia, we know of no other projects of this magnitude in recent history that have not triggered an individual federal permitting process. However, due to this project’s timing and circumstances, the State of Georgia is to provide the primary permitting. Thus, EPD has been placed in the unenviable position of assessing the potential impact the project will have on the Okefenokee National Wildlife Refuge.

This federally-protected wilderness is a globally-significant wetland bordered by Trail Ridge, the site of the proposed Twin Pines project. The ridge itself is a complex of hydrogeological settings—essentially a saturated sandhill. Forming an eastern barrier to the swamps and wetlands of the Okefenokee, Trail Ridge is not only ecologically important in and of itself, but also serves as scaffolding for the health of the Okefenokee. Mining along Trail Ridge could permanently impact the hydrology of the entire Okefenokee Swamp.

Of additional concern, the Okefenokee’s 438,000-acre biodiverse ecosystem is home to the headwaters of two notable rivers, the Suwannee and the St. Marys.

Risking the health of the Okefenokee, its ecosystem, and its current economic impact is unthinkable today as it was in the late 1990s. Then, the swift action of concerned citizens, scientists, lawmakers and conservation groups fought off a similar mining threat.

We applaud EPD’s focus on the project’s proximity to the National Wildlife Refuge and how it may impact the area’s groundwater hydrology. We look forward to the multidisciplinary EPD-led review of the scientific data that will protect the public’s interest in the project’s adjoining natural features, including the Okefenokee National Wildlife Refuge, associated wetlands, and the St. Marys River.

You can read more about the Georgia Conservancy concerns here: www.georgiaconservancy.org/okefenokee/mining

Interested in learning more about the Okefenokee Swamp and the proposed mining? Join our partners at the Okefenokee Protection Alliance (OPA) on Wednesday, October 20 from 7 PM – 8 PM for a free screening of the short film, Sacred Waters: The Okefenokee in Peril. 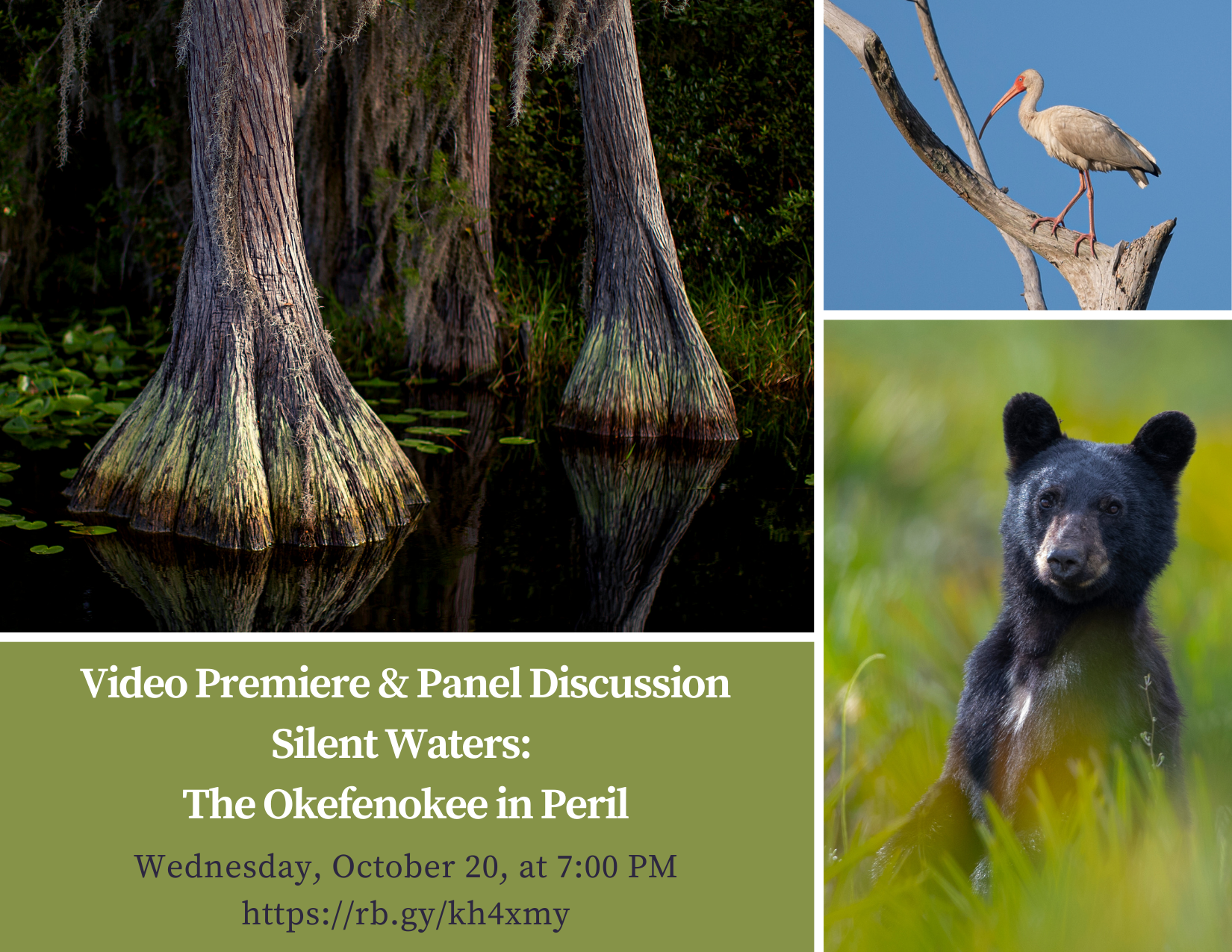 Register today to virtually view the premier of Sacred Waters and listen to Okefenokee advocates discuss the state of the Swamp and mining proposal.

Founded in 1967, the Georgia Conservancy’s mission is to protect Georgia through ecological and economic solutions for stewardship, conservation and sustainable use of the land and its resources.