By Maria Saporta and Douglas Sams
As published in the Atlanta Business Chronicle on April 15, 2016

The redevelopment of the 165-acre former Doraville General Motors plant, one of Georgia’s largest-ever real estate projects, is in danger of running into a ditch.

That dire assessment comes from the project’s developer, Atlanta-based The Integral Group LLC, which wants to turn the site along Atlanta’s northeast Perimeter into 10 million square feet of office towers, stores, apartments and restaurants on MARTA’s Gold Line. The concerns are also echoed by Doraville city officials and metro and county economic development leaders.

The more than $1.6 billion project would form a transit connection from the suburbs to the region’s urban core.

But, Egbert Perry, chairman and CEO of The Integral Group LLC, told Atlanta Business Chronicle in an exclusive interview on April 12 that those ambitions are in jeopardy, comparing the redevelopment now to a “ticking time bomb.” The uncertainty stems from a disagreement between Doraville, DeKalb County officials and DeKalb School Superintendent Stephen Green, who has refused to allow the system to take part in funding the project through a tax allocation district. 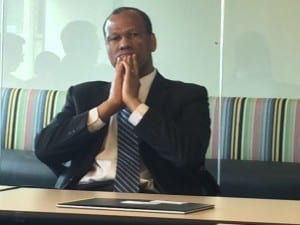 The tax allocation district (TAD) funding would help pay for up to $185 million of public infrastructure improvements for the project, including a roughly $50 million connector from Buford Highway to Doraville, the MARTA station and the redevelopment of the GM plant, which Integral is calling Assembly. The connector is critical for plans to transform the site, which sits at the intersection of Interstate 285, Peachtree Industrial Boulevard and the northern terminus of MARTA in DeKalb County, a short distance from DeKalb Peachtree Airport, into a regional transit-oriented development, Perry said.

“Think about what the 17th Street bridge meant to Atlantic Station. We have to make that connection,” says Dave Schmit of Macauley + Schmit, co-developer of the Assembly project. “Without it, we would have to build a more suburban development.”

For Integral, the pressures to get the project moving continue to mount.

Three economic development prospects with a total of more than 1,000 jobs looked at the project. The chance to land those companies is now lost, Perry said.

The economy is another concern. Historically, the economic cycle is probably past its halfway point, analysts say. The global head of real estate for private equity giant Blackstone Group recently told The Wall Street Journal that commercial U.S. property values are clearly “plateauing.” Developers and capital partners are also saying financing for some projects is more difficult. Lenders are wary of financing new mixed-use development delivering near the end of an upswing.

“Nothing good happens with the passage of time,” Perry said.

After investing almost $67 million in buying the site, Assembly’s developers made moves to offset the financial pressures of such a capital-intensive project. Last year, they sold 20 acres of the GM site to Duluth, Ga.-based Asbury Automotive Group, one of the largest auto dealers in the United States, for $19 million.

Integral also got about $13 million for selling the plant’s salvaged materials.

But Perry is in regular discussions with the project’s capital partner, which is indicating it’s starting to feel less comfortable. With each passing month, plans to create a dense urban node on the Atlanta Perimeter, a “city within a city,” are being weighed against offers from developers who envision other uses, including a more typical suburban housing development or outlet mall.

“We have the normal pressure of any deal that is capital intensive,” Perry said. “At some point the decision will be made for us.”

Perry, who has served on the board of directors of Fannie Mae and spent several years as a director of the Federal Reserve Bank of Atlanta, sees the site as a way to weave the region together economically and politically.

“The name Assembly is not by accident,” Perry said. “It harkens back to the GM assembly plant, but it also is about unifying, bringing together, the notion that we are trying to unify around transit. There are a lot of different ways that Assembly has significance. It can unify north and south DeKalb. The site has a lot of strategic, significant attributes.”

The disagreement over the future of the site underscores the powerful role school superintendents and school boards play in economic development.

Local governments creating TADs redevelop projects with borrowed funds that are then paid back from the additional property taxes those improvements generate. The city of Atlanta has used TAD funding to reinvigorate blighted areas of the city, notably Atlantic Station and the neighborhood around Centennial Olympic Park.

But, the funding mechanisms are also often controversial. Atlanta officials and Atlanta Public Schools recently made peace after a very public battle over the Beltline Tax Allocation District.

For Doraville, much hinges on the redevelopment of the GM plant. When it shut down seven years ago, the city lost 10 percent of its tax revenue and 36 percent of its total employment. Perry has said Assembly could reestablish the heart of the city. But, the disagreement over the TAD funding has become a roadblock.

Doraville officials have met twice with Superintendent Green, once in February and again in March. (To read an April 6 letter from Doraville Mayor Donna Pittman to the DeKalb County School Board, visit

Timing is an issue.

Integral had planned to start design and some construction this year based on the assumption the three governments would support implementing the TAD. The process of closing the deal for the bonds could take about six months.

Integral hoped Doraville could have gotten all the governmental approvals by June 1. Doraville would need a meeting with the full school board in coming weeks to meet that deadline.

“We are trying to get negotiations started,” said Shawn Gillen, city manager of Doraville.

The project is also pivotal for DeKalb.

Cobb County has the Cumberland Galleria, which includes the new ballpark for the Braves, SunTrust Park. In Fulton County and parts of far western DeKalb, the central Perimeter has the region’s largest office market. In Dunwoody, State Farm is building a massive campus that will connect with the MARTA station. In Sandy Springs, Mercedes Benz USA is building its new headquarters.

Farther east on the Perimeter and deeper into DeKalb, similar investment and development have been more difficult to attract. Katerina Taylor, president and CEO of the DeKalb Chamber of Commerce, says counties surrounding DeKalb are passing it in median income, increasing in population and winning big projects.

“We need this project to happen,” she says. “We need an opportunity to have a place where we can really say we’ve got economic development happening and coming to the county.”

Michael Paris, president and CEO of the Council for Quality Growth, agrees, noting that all big projects need public infrastructure.

“This is the turning point for this county,” he says. “Working across the region, the TAD provides an opportunity that the county is not going to see again.”

Bill Floyd, a former mayor of Decatur who’s now with the consulting firm Pendleton Group, says many other developers would have bolted from the project a long time ago.

“DeKalb County is in trouble, serious trouble. Leadership. Politically,” Floyd says. “DeKalb County will not recover if this project will not go through. That’s got to change. These guys have made an incredible investment in this county.

Previous Article
Column: Carlos, Vance to be honored for their philanthropic generosity
Next Article
Night Lights by Kelly Jordan