Titanium. When a German scientist isolated the element in 1795, he named it to honor the fanciful tales of the Titans, the giants that once ruled the Earth in Greek mythology. 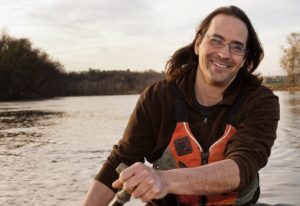 Today, in Georgia, the developers of a proposed titanium mine a few miles from the Okefenokee Swamp would have us believe the equally fanciful myth that its mine will “produce substantial benefits to the nation – for the national economy as well as national security”… and do no harm to the swamp.

When I heard Steve Ingle of Twin Pines Minerals make this claim to media last fall, and then read the company’s federal filings that further claimed the mine would “decrease the United States dependence on foreign imports of critical mineral resources,” it piqued my journalistic curiosity.

Could a single mine in Charlton County really accomplish so much? And, what was this titanium that it could mean so much to our “national security.” And, if this mineral were so critical, was extracting it from Trail Ridge along the eastern border of the Okefenokee Swamp worth risking the swamp itself? So, I investigated. 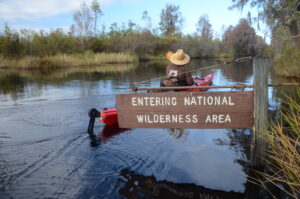 A proposed titanium mine seeks permission to withdraw up water a day from the Floridan Aquifer. Advocates of the Okefenokee Swamp fear the withdrawals may impact the level of groundwater, as well as was in the swamp. Special: Joe Cook

Full disclosure: I am a contract employee with Georgia River Network, one of dozens of organizations who last year formed the Okefenokee Protection Alliance in an effort to stop the mine. That said, I’m also a trained journalist, and I tackled this investigation, as best I could, wearing the hat of a journalist – not an advocate. The full extent of what I discovered can be read on this separate page in SaportaReport.

Here are a few key takeaways from this investigation:

The bottom line: Any claim that the proposed Twin Pines Minerals heavy mineral sands mine will produce “substantial benefits to the nation – for the national economy as well as national security” are, at best, overstated, and at worst, patently false. 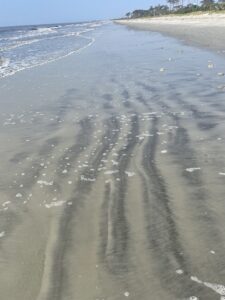 The heavy minerals in sands along the Georgia coast appear in the dark colors that are familiar to those who’ve walked along a Georgia beach. Credit: Rena Ann Peck

Titanium is something of a wonder mineral. It’s corrosion resistant and as strong as steel, but weighs 40% less than steel. It is also among the most bio-compatible metals known to man. These properties have led to titanium sponge’s more sexy uses in the manufacture of hip joints, mountain bikes, golf clubs, and notably, bombers and fighter jets.

Because of these well-publicized uses, titanium, the metal, has taken on an almost mythical importance as “rare” and “critical” – one as giant, and of equally dubious truth, as the tales of its Greek namesakes.

In truth, titanium’s primary uses are pedestrian – more than 90% of titanium extracted worldwide gets processed into titanium dioxide, an important pigment that has little in common with the titanium used to make the sexy metals.

Currently, the only place in the U.S. where titanium is mined is along an 80-mile swath of land stretching from North Florida to South Georgia, and none of that titanium ends its life as the metal used for national defense purposes.

In fact, there is currently no domestic producer of titanium sponge. Instead, the U.S. imports 90 percent of its titanium sponge from long-time ally, Japan. While the Trump Administration sounded the alarm over this dependence on imports, those within the industry remain unconcerned. 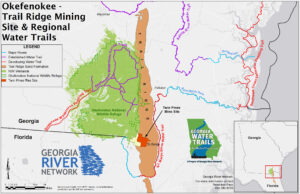 Twin Pines Minerals proposes to quarry sand from a site on the southeastern edge of the Okefenokee Swamp, extract minerals of value and return the leftover materials to the burrow pit and replant the area. Credit: Georgia River Network

The Aerospace Industries Association, representing industries that are the leading users of titanium sponge, said in its comments to the federal government earlier this year: “Current global market dynamics do not justify investment in U.S. titanium sponge production, so the U.S. titanium industry continues to import most of our industry’s raw material input, just as has been done for more than 50 years…. The partnership with Japan securely addresses this gap, as Japan is a reliable, long-standing provider of high-quality titanium sponge.”

With the U.S. holding just 10% of the world’s titanium reserves, we will always be dependent on foreign sources – both for titanium sponge and titanium dioxide. No amount of digging on Trail Ridge next to the Okefenokee will change that.

The good news is that the mineral is abundant and our global rivals – China and Russia – while holding significant titanium reserves, are not our primary suppliers. According to the U.S. Geological Survey, in recent years China and Russia have supplied about 2% of titanium sponge imports. The U.S. imports its titanium dioxide and other titanium mineral concentrates primarily from Canada, South Africa and Australia. 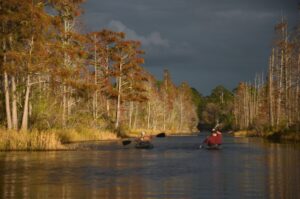 Visitors to the Okefenokee Swamp bring an economic impact of an estimated $64.7 million a year into local communities. Special: Joe Cook

Is titanium important to our national economy and national defense? For sure, it is.

But, it’s pure myth to suggest that the proposed Twin Pines mine in Charlton County will help build fighter jets or decrease our supposed dependence on global rivals for titanium.

The question then becomes: Is it wise to risk one of Georgia’s Seven Natural Wonders in the Okefenokee Swamp to dig for a common mineral that can be extracted elsewhere without such risks?

The journalist in me leaves that question to you. The advocate in me answers, “Not, no, but hell no!”

The link to Joe Cook’s report on the proposed mine near the Okefenokee Swamp is located here.

Previous Article
National defense does not need titanium from Okefenokee Swamp, industry says
Next Article
Housing lots near MARTA stations could be developed with condos, under ATL plan