Kevin Lavallee during an interview a couple of days before the grand opening of TK Elevator's North American he quarters. (Photo by Maria Saporta.)

As it opens its North American headquarters today adjacent to Truist Park, TK Elevator envisions playing an important role in the urbanization of the world.

On electronic messaging boards, TK Elevator highlights the fact that 70 percent of the world’s population will live in cities by 2050 (it’s now just over 50 percent). And that is good news for the elevator industry. 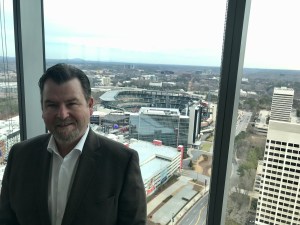 Kevin Lavallee, CEO of TK Elevator North America, in the board offices near the top of the new testing tower overlooking Truist Park and the Braves Stadium. (Photo by Maria Saporta.)

Increased urbanization will lead to fewer cars in cities, more people walking with more parks and green space, Lavallee said. It will also lead to more travel on elevators and escalators.

“It’s about moving people, and that’s going to drive infrastructure,” said Lavallee, who added that elevators are among the safest modes of transportation. “Our technology lends itself to a lot of forms of moving people safely.”

It might be counter-intuitive to consider elevators as a mode of transportation. But Lavallee has the numbers to prove otherwise.

TK Elevator, an environmentally-oriented company based in Dusseldorf, Germany, has annual revenue of $10 billion with one-third coming from North America. Its three-building complex in Cobb County demonstrates TK Elevator’s investment in North America and its belief that the market will grow.

The high point, literally, of its campus is a 420-foot test tower overlooking the Atlanta skyline and Truist Park — the tallest elevator testing tower in the Americas. Its 18 elevator shafts will test the latest in elevator technology, including predictive software, and simulate various climate conditions to make sure elevator travel remains safe, reliable and on the cutting edge. 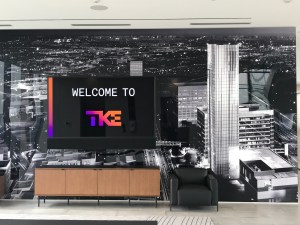 An electronic mural on the top level of TK Elevator’s testing tower shows an image of the new complex. (Photo by Maria Saporta.)

The Cobb complex will employ 900 of TKE’s 11,000 people in North America. One of the big draws in locating the complex in metro Atlanta was the availability of “STEM” talent — graduates in the fields of science, technology, engineering and mathematics.

Internationally, TK Elevator has introduced two ground-breaking technologies — the Twin and the Multi.

The Twin combines two elevator cabs in the same elevator shaft, a system that can more efficiently move more people. The first “Twin” elevator in North America is in the CODA building on the Georgia Tech campus in Midtown.

The Multi is even more mind-blowing. It travels vertically and horizontally, and it does not use cables or ropes. Instead, it floats on a magnetically-levitated field of air. The company currently is seeking code approval for that technology in Europe. According to TK Elevator, the Multi could revolutionize the way buildings and cities are built.

At the same time, TKE also is focused on servicing older elevator technology, including that of its competitors.

In terms of market share, TK Elevator is now No. 3 in the world, No. 2 — and closing in on No. 1 — in the United States and No. 1 in Canada, where Levallee grew up in the elevator business.

“My father and uncle started in the business,” Lavallee said. “I would go on service calls with my father.”

So, it was no surprise that Lavallee, who is from Toronto, became a service technician adjusting elevators in the field working for a company called Northern. After working as a technician, Lavallee went from electrical engineering into the management ranks. The German company Thyssen, later ThyssenKrupp, bought Northern in the late 1990s when it also bought Dover Elevator. Lavallee helped integrate the operations of the companies, and he was involved in growing the business.

Then in 2011, Lavallee retired from ThyssenKrupp and the ripe old age of 44. His goal was to ride motorcycles on every continent in the world, which he accomplished except for Antarctica. Then, in 2019, ThyssenKrupp convinced him to return to the company and oversee global field operations.

He then had the opportunity to head up North American operations, then based in Alpharetta, Ga. He was instrumental in building out the new TK Elevator campus, which includes the headquarters, the testing tower and a consolidation of the company’s North American business and training operations. 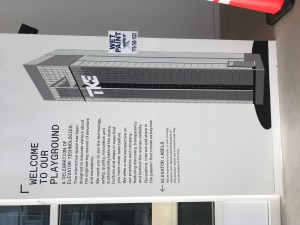 In 2020, ThyssenKrupp sold the elevator company to a couple of private equity firms — Advent and Cinven — changing the name to TK Elevator.

“We became independent in 2020, which is really good news,” Lavallee said. “That allowed us to become totally focused on elevators.”

Meanwhile, Lavallee and his wife have embraced living in metro Atlanta.

“My wife has begun to speak with a [southern] drawl,” Lavallee joked. “I can’t believe we didn’t move here 20 years ago. I can ride every month of the year. The people are fantastic. It’s a cutting-edge city.”

Lavallee, now 55, has become involved with the Metro Atlanta Chamber. He described the Atlanta region as a vibrant place with the presence of major company headquarters. He loves being close to sporting events and having access to Hartsfield-Jackson International Airport, so he can easily travel to Europe on a monthly basis.

His one complaint is Atlanta traffic, even though he said it is better than Toronto’s.

Could there be a way for TK Elevator to apply its technology to help Atlanta transition from an auto-centric city to one with new forms of transit and transportation options?

Although his background has been in fixing elevators, Lavallee said he now sees elevators as being a vital part of the future of cities.

“It’s now about moving people safely,” said Lavallee, who left open the possibility of TKE’s technology helping Atlanta figure out how to improve its transportation system. “Who knows what our business will look like 10 years from now?”