To build hope out of rubble, Haiti will need aid from France, others

PORT-AU-PRINCE — The stars in heaven over Haiti this week remind me of the strength of hope I have for the people of this island, just as the stars always have reminded me of hope during my 15-plus years as a volunteer servant in this country.

Our small mission to Haiti slept in a host home in Delmas, located between downtown Port-au-Prince and Pationsville. Well, we didn’t actually sleep in the home. Although I could have slept in the same beautifully appointed room where I’ve enjoyed countless comfortable nights over the years, our members decided to sleep on pads under the open sky with our awesome God as our watchman.

This sky and country is familiar to me. My work here has included serving as a monitor in the 1995 election; coordinating the delivery to Haiti of more than $1 million in medical supplies; and helping to sponsor an orphanage in Port-au-Prince, as well as a church, hospital and other community developments in several rural areas.

This work has enabled me to develop relations with civic and governmental leaders. Now, these relations established in the name of the Beasley Foundation will help us learn how to best help the Haitians through the recent natural disaster that augments the man-made disaster that comprises much of Haiti’s past.

The orphanage is a poignant metaphor for the potential of rebuilding the devastation of the earthquake. It promises to be a lesson about hope and cooperation. It promises to help begin to set right the wrongs perpetrated in Haiti for almost 200 years.

The orphanage lies in ruins. Years of work rendered into dust.

But the rubble represents hope. Because the children it serves survived. Nearly 30 orphans whom we lift up escaped death and even injury. And now, the plans for their future home, and those orphans who come in the future, are focusing on a new type of construction design and a new type of community that could become a model for a restored Haiti. 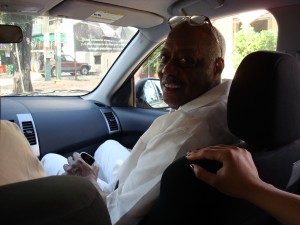 With approval of Haitian ministers, we in the Joe Beasley Foundation are pursuing the construction of an orphanage that will be placed at the center of a new neighborhood. The community will be built according to a new comprehensive development plan. The orphanage itself will be the model for affordable, earthquake-proof building practices that can realistically be done in Haiti.

We know this construction method works because it’s worked elsewhere, including our own city of Miami following a hurricane. The buildings are sturdy and don’t require the skills of trained construction workers.

So much rebuilding is required that the task won’t be easy. Nor will it be cheap. But there are ways to provide for the future if the transgressions of the past are rectified. Here are three of them:

Significant money for Haiti’s redevelopment should come from France. France took the immoral and unconscionable step of making Haiti pay the modern day equivalent of $30 billion following the 1803 revolution, in which slaves overthrew Napoleon’s army.

This bit of history is included in a report issued days before the earthquake by the US War College’s Strategic Studies Institute. The report states: “France was reluctant to recognize Haiti’s independence and demanded that Haiti compensate the French planters for their losses during the revolution. Haiti was forced to pay an indemnity of 150 million francs, which crippled the economy of the fledgling republic.” The money should be repaid.

Land for new communities should come from the Vatican. The Catholic Church still owns vast amounts of undeveloped land it received from Christopher Columbus following his claim of the island. Our contacts in the Haitian ministry put the amount of land at upwards of 8 percent of the country’s total land mass. The church should divest its holdings.

The United States should play an important role by lifting the virtual blockade it’s had on the island since the days of President Thomas Jefferson. The same report issued by the Strategic Studies Institute tells about US embargoes on Haiti that started with Jefferson and continued intermittently through 2000. I maintain that the US continues to impede full and fair trade with the hemisphere’s second oldest democracy. This must stop.

These three matters are long-term objectives that the Beasley Foundation will pursue. In the meantime, we also are focused on responding to the calls from Haiti’s ministers to help them with the things they need right away to rebuild their island into a sustainable country.

3) Organize and fund a trip to Senegal and Benin. Haiti’s ministers asked us to examine the potential of relocating Haitians in these African countries.

4) Aid distribution. The Haitian government, as it exists today, must have a say in how aid is distributed. Currently, non-governmental agencies have total control over dispursements.

The challenges facing Haiti are great. The devastation caused by the earthquake came at a time the world can ill afford to help. But a world that prospered while Haiti failed must reach out to help. The orphans who survived show us that we must. The stars in heaven remind us that we can.