Jerry Farber is a legend of the Atlanta comedy scene. But his commitment to helping those who help homeless people is no joke.

On Nov. 12, Farber completed a 300-mile, nearly seven-week walk from his new hometown of Columbus to Savannah to raise money for people who are homeless and local organizations that offer support. And did we mention he’s 83 years old?

“I don’t play golf, I don’t play tennis, and the idea of it makes me nauseous,” Farber said by phone from Savannah as he wrapped up the “Walk On Hope” with a visit to the Union Mission shelter. “… If you may have helped one person for one hour of your life, you will feel more fulfilled.”

A stand-up comedian in his own right, Farber for decades ran prominent Atlanta comedy clubs before semi-retiring to Columbus a few years ago. In the late 1980s, during the heyday of Buckhead’s nightclub scene, he ran Jerry Farber’s Place, which helped launch the careers of stars including Jeff Foxworthy. Before leaving Atlanta, he ran the Side Door club at Buckhead’s Landmark Diner, which now is the latest home of another legendary club, the Punchline.

Farber continues to perform and keeps his eye on the national comedy scene, expressing admiration for such modern stars as Jim Gaffigan. But his personal heroes have not changed: Mel Brooks, Woody Allen and Richard Pryor. His view of those legends of social and political commentary has some coloring from his late brother Barry Farber, a pioneer of talk radio who took a political turn to conservatism.

Farber recalls a Woody Allen TV special from 1967 where the comedian interviewed that era’s arch-conservative star, William F. Buckley Jr. “I watch it almost like some people pray,” Farber said of the interview, which is available on YouTube. “They couldn’t be more diametrically opposed, but they couldn’t be more polite… I watch it almost like history because it’s all gone.”

Farber’s own involvement in the social and political issue of homelessness came roughly 25 years ago simply as a favor to friends who worked with the Metro Atlanta Task Force for the Homeless, which launched at Mayor Andrew Young’s behest in the 1980s. Farber says that as a “reasonably popular entertainer,” he agreed to host a fundraiser at his Buckhead club.

Through that work, he met Jim and Anita Beatty, the operators of Downtown’s Peachtree-Pine shelter, which was in near-constant battles with the City and neighbors from its opening in 1997. Farber arranged a fundraiser for the shelter starring Foxworthy and Lewis Black. He soon joined the shelter’s board and stayed overnight in its bunks. 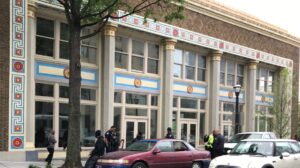 The Peachtree-Pine shelter as it appeared in 2017. (File Photo by Maria Saporta)

“I was probably the most impotent board member, but I really got to care,” said Farber. His experience there helped him understand “these are the most under-noticed and underserved people, and they need help. If religion means anything, these are all God’s children.”

Farber’s not religious himself, but he had personal, existential reasons for empathizing with the shelter’s clients. A sports gambling addiction cost him many thousands of dollars — some his, some borrowed from friends and family — and could easily have cost him his home.

“It was a terrible chapter. It hurt a lot of people,” says Farber. “I was broken, and giving back helped a lot to recover from my addiction.”

“I was there to the bitter end,” Farber said of Peachtree-Pine, which shuttered in 2017 after losing its battle with the City and is now owned by Emory University. He says he sees both sides, as the shelter was not run like a business, while “the City wanted us… away from where tourists would see the homeless.”

Homelessness is an issue all over Georgia, including Farber’s new hometown of Columbus and other cities like Macon and Savannah, as well as many small-town and rural areas.

The Chatham-Savannah Authority for the Homeless reports that in 2020, 4,058 homeless people received services through local programs. Of that group, 610 were described as chronically homeless (down from 786 in the 2019 count), with 74 percent African American and more than 38 percent veterans. The public school system reported serving over 1,000 homeless children.

The Housing Savannah Task Force, a government body created to address the issue, says that the city’s housing cost increases have outpaced income increases by nearly 2 to 1 over the past 30 years. Around 40 percent of Savannah households “cannot afford quality housing,” according to the task force, which has an action plan calling for building or improving at least 15,000 units by 2032 affordable to households making up to 80 percent of the area median income. 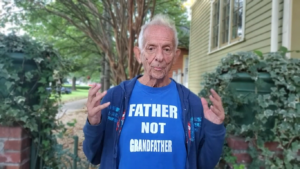 Farber discusses his fundraiser walk in a YouTube video recorded before he started out from Columbus.

Immediate help is important, too, and that’s one of the ways Farber aimed to help with his walk, which began Sept. 26. Conducted partly by driving between locations, the fundraiser included some comedy shows and shelter visits along the way. Sometimes Farber was solo, at other times joined by friends and other supporters. At publication time, Farber had raised more than $7,100 and secured some corporate donations, including 2,000 socks from Bombas and 1,000 pecan log rolls from Stuckey’s. The items go to shelters and the funds will pay for backpacks of supplies, among other programs, Farber said. For fundraiser details, see its GoFundMe page.

For portions of the trip, Farber slept in his car, warning police departments along the way that he was not himself homeless. He got a lot of support in small cities like Reynolds, he said. “I’m not giving blanket endorsement of police, but the ones I met — I think the most dangerous thing going on in town was my appearance,” he said.

For good and ill, Farber met people along the way who had or were experiencing homelessness in small towns and cities.

In Dublin, Georgia, he said, he accidentally soaked his bed sheets with water. “I was airing out sheets, so I looked like I was homeless,” he says. He was approached by a young woman with mental health issues who said, “Can I help you, sir? I’ve been homeless myself,” and offered to do his entire load of laundry while he wandered the town. He bought her dinner, and her mother later attended his fundraiser comedy show.

Less pleasant was his encounter with a group of homeless people as he tried to bed down in his car in a grocery parking lot in Milledgeville. The group gathered around the car to “check on him,” Farber said. “I have always carried 20 $1 bills — that’s a New York thing,” he says. “For ‘protection’ sounds too cruel, but if you’re able to do it, you give a dollar here and a dollar there.” He says he gave eight people a dollar each and headed off to park at the police station.

As he spoke to me at journey’s end, Farber was enjoying a bit of luxury arranged for him in Savannah by some friends: some wine at a rooftop bar at a fine hotel where they booked him a room. But as he talked about America’s ever-growing income inequalities, he couldn’t resist taking a look over the edge of luxury.

“I can see homeless [people] getting ready to bed down in front of the JW Marriott where I am — $700 a night,” he said.