To our three Kings – Bernice, Dexter, Martin – make peace for all our sakes

My heart sank when Bernice King issued a statement last week that her two brothers wanted to sell their father’s Nobel Peace Prize medal and his traveling Bible. They had gone so far as to file a lawsuit to get possession of those priceless treasures.

One could almost hear a collective groan from Atlanta and beyond. Here we go again. Here are the King children squabbling among themselves, taking each other to court, showing the world that they are unable to resolve their differences.

The ironies are there for the world to see. The three children of the greatest leaders for non-violence and conflict resolution — Martin Luther King Jr. and Coretta Scott King — have yet to be able to resolve the conflicts among each other.

As a result, the world lumps the three King children together. (When their sister, Yolanda, was alive, the four children would be referred to as one unit — the kids who only were interested in making money off their father’s estate).

It’s been a sad and unfair characterization of a family of three individual siblings who each have strengths and weaknesses — three people who have failed to totally live up to their full potential because for whatever reason they keep dragging each other down.

For those of you who are regular followers, you know I have a long, personal history with the King family. I was closest to Yolanda, but I have been fortunate to have known MLK Jr., Mrs. King, Martin III, Dexter, and more recently, Bernice.

I can truly say that I have cared (and continue to care deeply) for each and every one of them. So it is with a full and heavy heart that I write this column.

Before I sat down to write, I called Andrew Young, who is “Uncle Andy” to the three King children. Young became a surrogate father to them when their father was assassinated in 1968, and he probably has as keen an insight on what makes them tick as anyone. 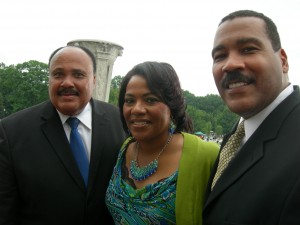 Martin III, Bernice and Dexter King at the 50th anniversary of the March on Washington (Photo by Maria Saporta)

“These are three strong-willed, intelligent, individual people who have a difference of opinion on just about everything,” Young said. “At different occasions, I have agreed with each one of them.”

Ever since the nuclear family has been reduced to just the three children, the three have had shifted allegiances depending on the situation.

When Bernice and Martin III could not get their brother, Dexter, the CEO of King Inc. (the private company that controls the estate), to release detailed financial records on various transactions (such as the $32 million sale of the King papers to the Atlanta community), they filed a lawsuit asking for transparency.

It is unclear whether that issue was ever fully resolved despite a judge hiring a legal custodian who took oversight for a period of time before exiting the scene.

Then on Aug. 28, 2013 — the 50th anniversary of the March on Washington — Dexter and Martin filed suit against Bernice trying to oust her as CEO of the King Center among other demands. She filed a countersuit.

And then on the national King holiday — Jan. 20, 2014 — Bernice said her brothers informed her of their desire to sell the Nobel Peace Prize medal and the Bible that President Barack Obama used during his second inauguration to take his oath of office.

At a press conference last week, I asked Bernice: “When does this end?”

“That’s the same question I ask myself everyday,” she answered.

Clearly Bernice is winning in the court of public opinion. Since August, Bernice has been more willing to publicly speak her mind and take her case directly to the community.

Bernice finally appealed to the press to not refer to them as the King children. “I would appreciate you not grouping me with my brothers,” she said. “I will always love my brothers, but we are of different minds, and most importantly, different relationships with God. I know my position is right. It’s about standing on principle.”

From her standpoint, “this is not and never will be about money,” said Bernice, who doesn’t take a salary as the King Center’s CEO.

Over the years, I have had several interviews with Martin III, who has been just as passionate about his commitment to the ideals set forth by his mother and father. When he was the odd man out, he would bemoan the fact that their family legacy was being tarnished when these fights occurred.

Because I’ve had so many heart-to-heart conversations with Martin III about the future of the King Center and the importance of his parents’ legacy, I have been unpleasantly surprised by how he has become a party to these lawsuits.

It does point back to Dexter, who as CEO of King Inc., controls the purse strings for the family. The suspicions have been that Dexter gets a salary as CEO and gets fees for every intellectual property transaction before disbursements are made. That has made it difficult at times for either Bernice or Martin III to be fully independent of their brother.

“There’s no reason why they can’t work together but Dexter plays one against the other,” Young said.. “Martin and Bernice are living modest lifestyles, and they have a hard time making ends meet. The lawsuits don’t make things easier.”

In many ways, they inherited their problems. Young said that MLK Jr. only made $6,000 a year as a preacher at Ebenezer Baptist Church and only $1 a year as president of the SCLC (Southern Christian Leadership Conference). “Coretta was broke when Martin died,” Young said.

The children did inherit an amazing amount of responsibility — having to live in the shadow of their larger than life parents.

“Martin is a very gentle spirit,” Young said, adding that “Martin Luther King III has the name but he has not assumed the mantle.”

Dexter has a strong business mind who tends to be laser-focused on the intellectual property of the estate — either to protect the King legacy or to profit from it or both.

And Bernice is finding her voice by taking to heart the words that her mother and father shared with the world. But Young adds that that she can be stubborn making compromise among the siblings challenging.

But all of this anguish is really a backdrop to what we should be working on — and that’s protecting the future of the King Center.

I have heard that as long as the King family is controlling the board of the Center and running the entity, donors will be reluctant to give money to restore and improve the facilities to first-class condition.

“I would have hoped for an independent board,” said Young, who continues to be the only non-family member on its board. “It has to be a broader board than a family board.”

Young said he was in favor of a proposal that Dexter had put together years ago to sell the Center to the National Park Service while letting the family continue to run programs out of the facility. Young said Bernice opposed the sale at that time.

Later this year, a new streetcar will stop near the front door of the King Center — providing another opportunity to highlight a unique Atlanta destination. Wouldn’t it be wonderful if the Nobel Peace Prize medal and the Bible were on display at the Center to add more value to that experience?

So many possibilities exist, but the full potential of the King Center, the King children and even Atlanta’s civil rights legacy won’t be realized until Dexter, Martin and Bernice figure out a way to lay down their swords and find a fair way to work with each other.

So from the bottom of my heart — Martin III, Dexter and Bernice — you owe it to Atlanta, to your parents and most of all to each other — to reach an equitable and lasting peace.

The legacy is in your hands.