By Maria Saporta
Published in the Atlanta Business Chronicle on May 23, 2014

The Atlanta History Center is about to reshape its own history.

After reaching its largest-ever capital campaign goal of $21.1 million, the Atlanta History Center will begin construction on an extensive renovation of its campus, including its signature building that houses the major exhibit space and the ballroom.

Building construction will begin in July and will take about a year to complete. The History Center will remain open during construction — both the museum and the event space.

But the entrance with the admissions and tickets operation will be moved temporarily to adjacent McElreath Hall, and museum patrons will access the museum through the back entrance.

The campaign was able to reach its goal thanks to a $3 million gift from the Goizueta Foundation. 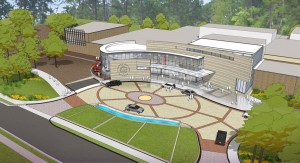 That gift will go to rehabilitating the six gardens that make up 22 acres of the Atlanta History Center campus. The 22 acres will be known as the Olga C. de Goizueta Gardens at the center, a naming request made by her children.

Goizueta, who usually prefers to take a behind-the-scenes role, has been a strong supporter of the History Center, serving on the board of trustees from 1984 to 1996.

“We have had six different gardens with no unifying brand,” said

Sheffield Hale, the Atlanta History Center’s president and CEO. “This gift will help us brand the gardens under the name of someone who was so personally involved on the board.”

The campaign has taken some twists and turns since it was originally launched in 2010. Originally the goal was set for $22.4 million with another $5 million for an increased endowment. The center then held a design competition to revamp the main building and the front of the campus facing West Paces Ferry Road.

The projected cost of the top design, however, was much greater than the budget, so the Center went with another favorite team.

The transformative projects have been designed by architects W. Grant Moseley and Larry Sweat of MSTSD Inc. and landscape architect Meck R. Cain of Jacobs Engineering Group Inc, among others. The project will be constructed and implemented by a team that includes Jackson McQuigg, the Center’s vice president of properties, and C.D. Moody Construction Co. Inc. 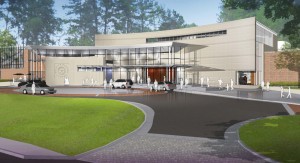 “We went back and resized the campaign and dropped it by $1.3 million,” Hale said. “We realized we could do it for $21.1 million (instead of $22.4 million). We are doing exactly the same things we had planned to do, but we are doing it smarter.”

Hale said that the center already has secured $2 million toward its $5 million endowment goal, and that effort is “ongoing.”

Other top donors to the campaign included the Robert W. Woodruff Foundation, the Frances and Beverly DuBose Foundation, the Cox Interests (Anne Cox Chambers and the James M. Cox Foundation), the Coca-Cola Co., and the Home Depot Foundation. Coxe Curry & Associates served as the fundraising counsel.

When the transformation of the main building opens next summer, patrons will see an atrium that is twice the size of the current one. The renovated building also will “rationalize” the layout of the various exhibit areas.

One of the main features of the fundraising campaign was the development and design of a new signature “Atlanta History Exhibition.” As the “cornerstone” of the campaign, the center will be reimagining the now-closed exhibit on the history of Atlanta – “Metropolitan Frontiers.”

The team redesigning that exhibit is Riggs Ward Design LC of Richmond, Va. The team is developing a new 7,700-square-foot exhibition space that will feature sustainable best practices for educational and immersive technologies while remaining focused on real artifacts and documents from the Center’s extensive collections. 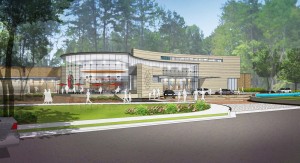 That exhibit is scheduled to open in March 2016.

For Hale, the relationship that the Atlanta History Center has with its neighbors is just as important as what happens within its 33-acre campus.

Several large trees are being cut down to make room for the expanded atrium, which will include a café area. Also, several other trees were cut down to make way for the Veterans Memorial Park at the northeast corner of its property.

But Hale promised that many more trees will be planted on the grounds to replace those trees.

Once all the plans have been implemented, Hale believes it will “change the way we interact with the public” and the community.

Previous Article
Atlanta’s pension reform, credit rating at issue as city eyes $250 million in upgrades of roads, bridges, sidewalks
Next Article
Gen. Shinseki’s leadership at the VA is not inspiring trust among the ranks