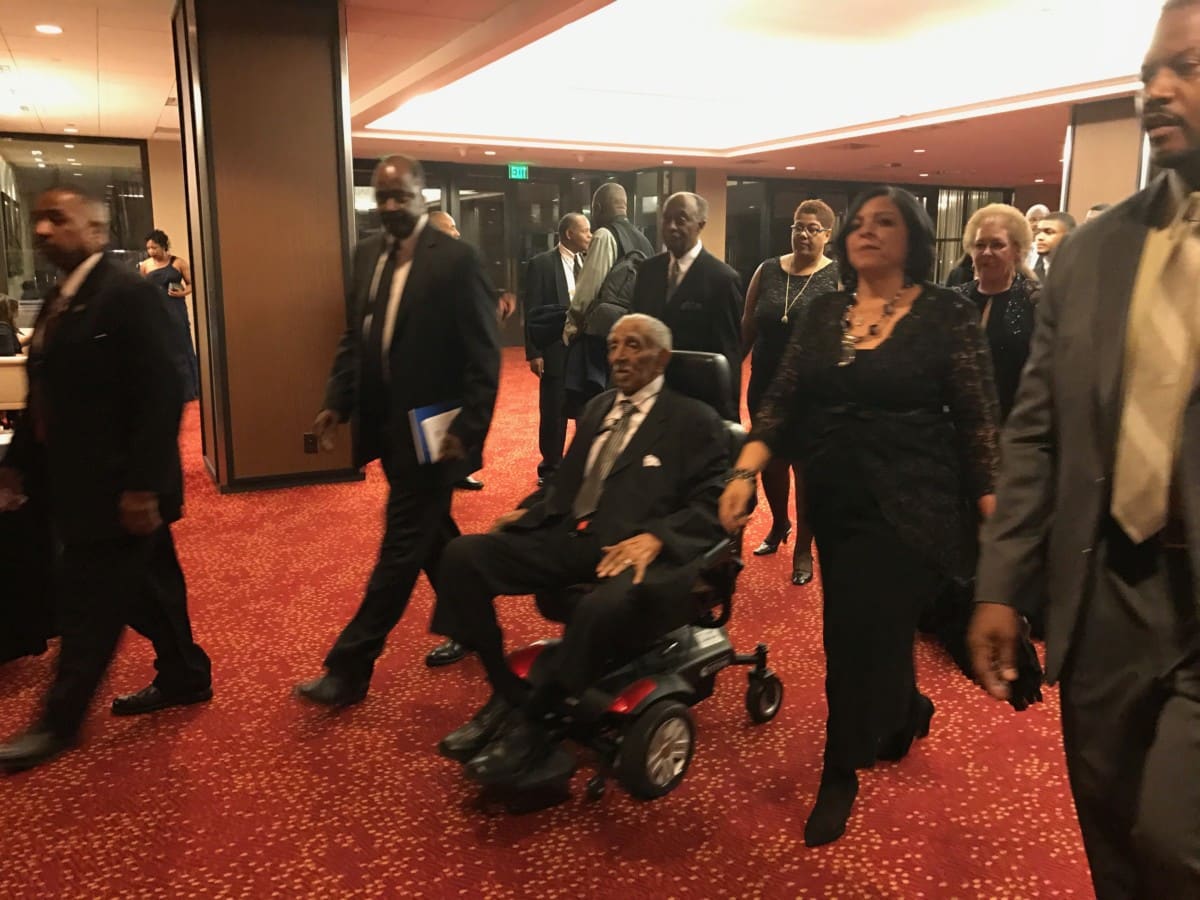 The backdrop was surreal.

The attack was not only against Lewis, but against his Atlanta district – one that Trump called crime-infested and horrible.

As Atlanta leaders tried to hold onto their belief in the beloved community, they could not ignore the twitter words from the man who soon will have the most important post in the world. 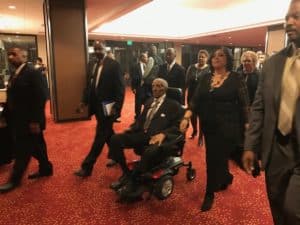 Rev. Joseph Lowery on his way to the dinner at the Hyatt Regency (Photo by Maria Saporta)

“To quote Donald Trump, anytime they call your name is good,” Young said about his friend Lewis. “It’s the first time I’ve heard someone challenge or question John Lewis. Donald Trump is very spontaneous. Atlanta speaks for itself. I’m not going to say anything bad about Donald Trump. We have too much invested in democracy to not recognize what we have.”

But Young also differed from Lewis on whether Trump was legitimately elected.

“I don’t think the Russians swung the election,” Young said. “I think we lost it. We have no one to blame but us. He won and that makes him president – whether we like it or not.”

Whether Trump will become a legitimate president, Young said: “That remains to be seen.”

Others were more vocal.

“What Donald Trump is doing is invigorating the movement,” said Vincent Fort, a state legislator who is running to be the next mayor of Atlanta. “I’ve never seen so much intensity since Nov. 8. People are standing up. People are fighting back against bigotry and intolerance.” 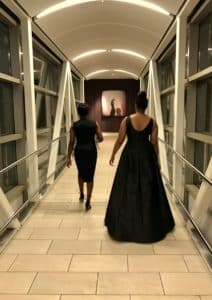 The only other mayoral candidate at the dinner was Peter Aman, a former consultant for Bain and a former chief operating officer for the city.

At first he was hesitant to talk about the Lewis-Trump controversy, but later he sent an email to express his thoughts.

“As we celebrate the legacy of MLK Jr  tonight, it’s clear Atlanta is a city with a deep commitment to civil rights and inclusion for all Americans,” Aman said. “We continue to aspire to those ideals every day and we’re proud of our diverse neighborhoods, vibrant communities and thriving businesses. The President-elect ought to come down for a visit.”

The man of the hour was Rev. Joseph Lowery, who received the Salute to Greatness Award for an individual.

In his mind, President-elect Trump is in need of our prayers.

“He has got an awesome responsibility, and we need to pray for him,” Lowery said after the dinner. He also said he was not surprised to see Trump go after Lewis. “It’s typical of him, and we must ignore him.”

Atlanta Mayor Kasim Reed, who did not attend the Salute dinner, responded to the controversy by tweeting.

“@RepJohnLewis is an American hero & a national treasure. Period. Full stop,” Reed wrote in the first of three tweets.

“That PEOTUS Trump would attack Congressman Lewis on MLK Day weekend for ‘all talk…no action’ when he bled to actually ‘Make America Great,’” read the second tweet.

And then Reed concluded: “is why far less than half the country supports him at the dawn of his presidency.” 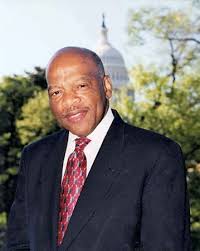 On Sunday afternoon, Rep. Lewis sent out an email that said: “A personal request,” but it was actually a call to donate to the Democratic party. But his comments in the appeal showed he is not backing down.

I’ve been beaten bloody, tear-gassed, fighting for what’s right for America. I’ve marched at Selma with Dr. King. Sometimes that’s what it takes to move our country in the right direction.
We refuse to stop now. We’re not done fighting for progress. We’re ready for the next four years.

While we have made progress towards a vision of a more fair, just and open country, the majority of Americans are afraid this country is headed in the wrong direction.

Some leaders reject decades of progress and want to return to the dark past, when the power of law was used to deny the freedoms protected by the Constitution, the Bill of Rights, and its Amendments.

I remember when segregation was the law of the land that ordered our society in the Deep South. The forces of law and order in Alabama were so strong that to take a stand against this injustice, we had to be willing to sacrifice our lives for our cause.

It took massive, well-organized, non-violent dissent and criticism of this great nation and its laws to move toward a greater sense of equality in America. We had to sit in. We had to stand in. We had to march. And that’s why more than 50 years ago, a group of unarmed citizens, black and white, gathered on March 7, 1965, in an orderly peaceful non-violent fashion to walk from Selma to Montgomery, Alabama.

Often, the only way we could demonstrate that a law on the books violated a higher law, was by challenging that law. By putting our bodies on the line and showing the world the unholy price we had to pay for dignity and respect. 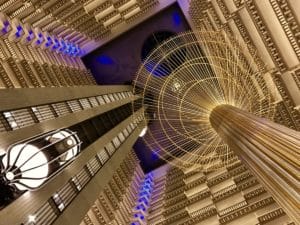