Participants in Atlanta’s Better Building Challenge have partnered with the Atlanta Audubon Society in an effort to reduce bird deaths and power bills during the spring migration season.

Named “Lights Out, Atlanta,” the program intends to reduce the number of birds killed or injured when they fly into buildings. The program is open to residences as well as commercial properties.

The Atlanta Audubon Society has evaluated bird deaths or injuries due to collisions for two years. More than 500 birds of 70 different species have been collected.

Nationwide, an estimated 350 million to 1 billion birds die in the United States after colliding with buildings, according to a statement from the Atlanta Audubon Society.

The ABBC participants are natural partners because they have already agreed to reduce their consumption of electricity, partly by reducing power used for illumination. More than 590 buildings within the city limits of Atlanta participate in the ABBC.

Participants in “Lights Out, Atlanta” pledge to reduce non-essential lighting from midnight to dawn during the peak spring migration period, from March 15 to May 31. The program resumes during the autumnal migration, from Aug. 15 to Nov. 15. 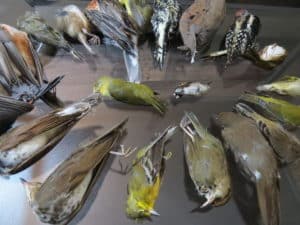 A sample of birds that died after colliding with buildings in Atlanta and were collected by the Atlanta Audubon Society. Credit: Adam Betuel

The pledge is available on this page of the Atlanta Audubon’s website.

The program seeks to reduce the confusion that nighttime illumination creates for migrating birds. They face a potential double whammy.

For starters, birds prefer to migrate at night to reduce their exposure to predators and to exert themselves at cooler hours of the day, according to a statement from the Atlanta Aububon Society.

In addition, because birds navigate at night by natural bodies, the stars and moon, the artificial lights harm them rather than help light their way. Birds fly toward bright lights, rather than away form them.

Participants in the Better Buildings Challenge are natural partners because they already have agreed to reduce the amount of electricity they consume. The target is a 20 percent reduction by 2020, using 2010 as the base year.

According to a report on the ABBC’s website, Atlanta leads the nation in the amount of total square footage that is enrolled in the program. More than 111 million square feet is enrolled, representing more than 590 buildings.

The ABBC was started in June 2011 at the Clinton Global Initiative as one of the U.S. Department of Energy’s Better Building Challenge Program.