Compared to metro Atlanta, the region of Minneapolis-St. Paul virtually works as a metro government.

Back in 1967, the Metropolitan Council was established of seven counties, primarily as a planning organization.

But in 1994, the Council took on the responsibility of planning and operation of the region’s transit agency (Metro Transit), the wastewater treatment system, aviation and parks.

In short, the council brought a regional mindset to what the Minneapolis-St. Paul area believed were metro issues rather than purely local issues.

Although the concept of a Metro Council has proven valuable, Jay Lindgren, an attorney who is a former administrator of the Council, wondered if such a agency could be created in today’s environment.

Lindgren, joined by two former Council chairs and the current chair, explained to Atlanta’s LINK delegation that there continue to be discussions about its structure.

Surprisingly all 17 members of the council, including its chair, are appointed by the governor of Minnesota and serve at his pleasure.

“This structure sort of makes the governor the mayor of the region,” Lindgren said, adding that can be problematic if the governor changes every four years. One solution would be to stagger the terms of the council members. 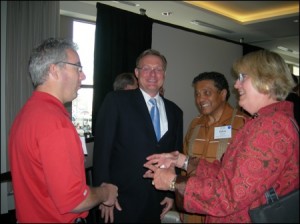 Another would be to let the governor appoint some of the members and give elected officials from the region a seat on the council, an option suggested by Peter Bell, the current chairman of the council.

“I think the Metropolitan Council has never had broader acceptance than it has now,” Bell said. “What is ironic to me is that it could not come into existence today.”

The closest metro Atlanta has to such a governance structure is the Atlanta Regional Commission, a Metropolitan Planning Organization. But the ARC does not operate the region’s transit, wastewater, aviation or parks system. And the ARC does not have as much power as the Metropolitan Council to guide growth in its region.

The Council puts together a 10-year regional development guide for the Minneapolis-St. Paul area. Cities put together their own corresponding 10-year plans that must be compatible with the regional plan to be able to receive funding. That basically means land-use and zoning decisions are made on a regional basis.

One of the former chairs of the Council is Ted Mondale. He told the Atlanta delegation that the Minneapolis-St. Paul region has been able to come together because of business leaders.

“The life raft that keeps this community going is that we probably have more Fortune 500 companies per capital than any other city,” Mondale said. “The only reason we have what we have today is the business community. They stood up.”

Much of the conversation focused on transportation. Currently in operation is a Hiawatha light rail line that connects downtown Minneapolis with the Mall of America. That line has proven to be so popular that now the Twin Cities region has several transit projects underway.

“The Hiawatha rail line opened up the imagination for the public,” Bell said, calling it the most successful Twin Cities infrastructure project in decades.

Minneapolis-St. Paul has such an aggressive transit initiative because the region was able to get five of the seven counties to pass a quarter-cent sales tax as one of the revenue sources.

The Minnesota legislature also appropriates money out its general fund every year to help cover the operations of Metro Transit. And voters were given a chance to vote on a constitutional amendment for a new transportation funding source. Voters passed in a referendum to allocate 100 percent of the motor vehicle sales tax to transportation. At least 40 percent of that tax must be dedicated to transit.

All of these initiatives took the courage, commitment and support of the business community to pass.

David Olson, president of the Minnesota Chamber of Commerce, explained that business leaders viewed congestion as an economic problem.

“The business community said it was becoming too expensive to move people and goods,” Olson said. “They said, ‘Fix this.’”

In order to get the referendum passed, the business community launched a $3.3 million broad-based, yet strategic, campaign with the simple message: “Vote Yes.”

Metro Atlanta has been pushing the Georgia legislature to let voters decide on a referendum for a one-cent sales tax for transportation, either on a statewide or regional basis.

Despite making that its top priority for the last several years, the Atlanta business community is becoming increasingly frustrated that nothing has passed.

Atlantans who have been on many of the other LINK trips in past years wondered why it seems that every city we visit is building light rail, and yet metro Atlanta still hasn’t been able to find a way to finance and expand its rail transit options in the region.