It’s the small touches that make a city special.

Thanks to a host of community partners and two major corporate donors — Norfolk-Southern and Bank of America — downtown Atlanta’s beautification continues.

It was with great fanfare that Atlanta Mayor Kasim Reed, Norfolk-Southern’s Joel Harrell, City Councilman Kwanza Hall and others put their hands on a button that revived the waterfall and fountain at Margaret Mitchell Square. 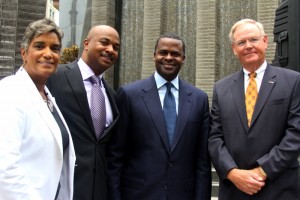 And just a few moments later, it was with equal joy when the multicolored veil was removed from the new ATL play sculpture by many of the same players and Bank of America’s Geri Thomas.

As soon as the tarp was removed, children from the Centennial Place School swarmed all over the sculpture — trying to figure out how they could get the most fun out of playscape that spells ATL right at the historic corner of Auburn Avenue and Peachtree (Remember the book: “Where Peachtree Meets Street Auburn”?)

The fountains at Woodruff Park also were fully operational — providing some respite from the humid heat of the late morning. But whether it’s the ground-breaking for the new National Center for Civil Rights or the unveiling of the ATL playscape or the restoration of Margaret Mitchell Square, happy occasions help lessen the heat of an Atlanta summer.

“There’s no question in my mind that the arts, culture, recreation and parks help define special cities,” Reed said. “I am absolutely committed to the arts and to making the City of Atlanta a great place to live, an inspiring place to work and a wonderful place to visit.” 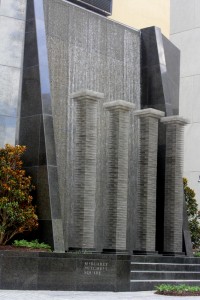 It was the mayor who acknowledged the history of the intersection that includes Margaret Mitchell Square, originally installed in 1986.

Mitchell was the Pulitzer Prize-winning Atlanta author of “Gone with the Wind,” which was made into a block-buster movie. The movie actually premiered at that intersection in 1939 at the old Loew’s Grand Theater, originally the Grand Opera House built in 1893 by Belgian consul Laurent DeGive.

The beautifully designed theater went up in flames on Jan. 30, 1978 — one of the coldest days of the year — and the water that doused the fire froze making the building look as though it was crying. Soon (maybe too soon) that became the site of Georgia-Pacific Tower.

Tuesday’s improvements were an opportunity to celebrate the downtown Atlanta of today. 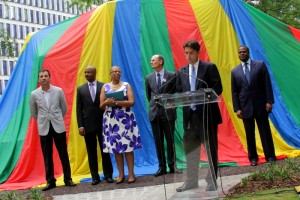 Speakers and honored guests stand in front of the colorful tarp before the unveiling of the new ATL play sculpture. (Photo by Robin L. Marshall)

Craig Jones, an executive of Cousins Properties who chairs the Atlanta Downtown Improvement District, thanked everyone for helping “celebrate another landmark in downtown Atlanta” and for “maintaining a safe, clean and vibrant city center.”

The occasion also provided an opportunity to showcase public art. The Margaret Mitchell Square features “two intricate stainless steel structures” with columns and granite featuring imagery of the “antebellum South,” according to Camille Love, director of cultural affairs for the City of Atlanta.

Just a block or so south at Woodruff Park, the theme was the future. The playscape, constructed with recycled plastic made to look like wood, heralded the presence of children and the next generation in downtown’s core. 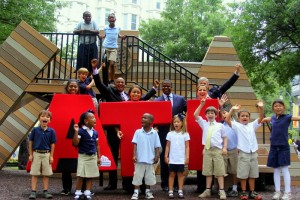 After the unveiling of the ATL play sculpture, children joined the fun. (Photo by Robin L. Marshall)

A.J. Robinson, president of Central Atlanta Progress, credited Cynthia Gentry from the Atlanta Taskforce on Play, for the idea of a playscape.

“We didn’t even realize that Woodruff Park needed a playground until Cynthia Gentry came to us,” Robinson said.

The morning events reminded me of the wise words that Gil Penalosa, the founder of 8-80 Cities, told Atlantans when he was here in April attending the annual Park Pride conference.

“Public spaces have to be wonderful places for 8-yearolds and 80-year-olds,” Penalosa said, emphasizing that cities have to be created for people rather than cars. All 8-year-olds and a large number of 80-year-olds do not drive. Instead, they have to enjoy a city at the pedestrian level.