In the race to be the Democratic nominee for Lt. Governor, the only candidate to show up was Charlie Bailey, an attorney. His opponent, Kwanza Hall — a former member of the Atlanta City Council, never even responded to an invitation to appear — despite multiple attempts to reach him.

In fact, Hall also did not respond to invitations to appear in the primary debate on May 3 — again despite multiple attempts to reach him via  cell phone and text message. 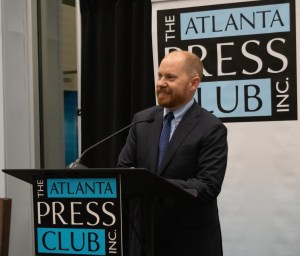 Bailey took full advantage of Hall’s absence during the Monday run-off debate. During the portion of the debate when candidates can ask each other questions, Bailey’s question to Hall via the empty podium said it all.

“Why do you have so little respect for voters of this state?” Bailey asked Hall. “He can’t answer that question because he’s not here… Him not being here also is a pattern. It’s a pattern of a lack of respect for voters. It’s a pattern of an unserious person. If you cannot stand up with the voters, tell them what you believe, listen to the questions of a free press, you are not prepared to be the Lt. Governor…  You are not deserving of the role of Lt. Governor.”

By the way, I sent my final text to Kwanza Hall at 4:27 p.m. Monday after he failed to show up for the 3:15 p.m. debate to let him know I was planning to write a story.

“Anything you want to say for yourself?” I wrote. 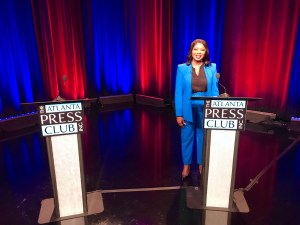 Insurance Commissioner candidate Janice Laws Robinson during the June 6 run-off debate that included an empty podium because Raphael Baker did not attend. (Photo by Maria Saporta.)

The other candidate who failed to appear at Monday’s run-off debates was Raphael Baker, a Democratic candidate for Georgia Insurance Commissioner. At least Baker informed the Atlanta Press Club he would not be attending the debate.

That meant Janice Laws Robinson, an insurance salesperson, had the stage to herself.

During the candidate-to-candidate Q&A, Robinson told the empty podium that if “Mr. Baker were here,” she would ask him about his plans for the office.

“However, the empty podium says it all,” she said. “He does not take this position seriously, and he has no plans for Georgians. He’s not showing up for a debate, and he will not show up for you.” 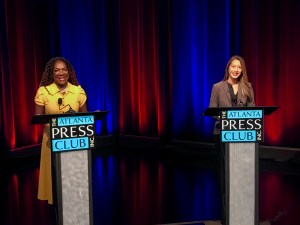 Both Democratic candidates for Secretary of State Dee Dawkins-Haigler and Bee Nguyen – spoke of the importance of participating in debates as part of the democratic process. (Photo by Maria Saporta.)

The debate between the two candidates running for the Democratic nominee for Secretary of State — Bee Nguyen and Dee Dawkins-Haigler — was the exact opposite.

At first, Dawkins-Haigler informed us she was going to be in Aruba during our debate. The trip had been scheduled since last year — before she decided to run for office. The trip was a joint celebration of her 29th wedding anniversary on Sunday and her daughter’s graduation from Morehouse Medical School. The family left for Aruba on Friday for a week-long vacation, but Dawkins-Haigler flew back on Sunday to attend the Monday debate.

“It’s very important for the people of Georgia to hear our voices and discern who is the best person to go up against Brad Raffensperger,” Dawkins-Haigler said. “At the end of the day, you put yourself up for service.”

Nguyen said participating in the debates is an important part of having a “healthy democracy” — an attribute that is vital to the position of Secretary of State.

“It’s another opportunity to get in front of Georgia voters and engage in a good-faith debate,” Nguyen said.

One of the livelier debates on Monday was the 10th Congressional District debate between Mike Collins and Vernon Jones. Before the debate, I made sure to thank both candidates for showing up. 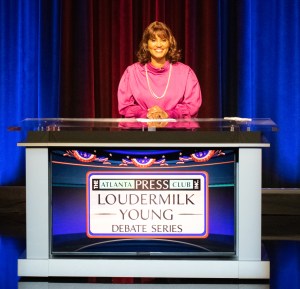 Jones, who was familiar with our debates during previous campaigns, jokingly said: “It would be a lot more boring without me.”

With Kwanza Hall not showing up, Charlie Bailey had an opportunity to let viewers know that he has been endorsed by Stacey Abrams, the Democratic gubernatorial candidate; former Atlanta Mayor Shirley Franklin as well as U.S. Representatives Lucy McBath and Hank Johnson.

As Bailey said before his debate: “If you want to get voters to vote for you, it might help to actually give them the respect to hear from you.”

The Atlanta Press Club Loudermilk-Young Debate Series is presented in partnership with Georgia Public Broadcasting. The debates are all available for viewing online. We hope our debates help voters be better informed before casting their votes. The run-off election will be held on June 21, and early voting will be available statewide on June 13.

The Loudermilk-Young debates are named after Charlie Loudermilk, a conservative Republican white business leader who made a generous gift to endow the debates and his close friend, Andrew Young, a Black liberal Democrat and former Atlanta mayor and civil rights leader.