After more than eight months seeking to buy most of Fort McPherson to redevelop into a major movie production studio, filmmaker Tyler Perry is having second thoughts, according to people close to the situation.

Tyler Perry Studios and the McPherson Implementing Local Redevelopment Authority (MILFRA) had signed a memo of understanding to have Perry buy 331 acres of the 488-acre former Army base at a cost of about $30 million.

According to someone familiar with the most up-to-date information, the deal is not dead, but it is “on the rocks,”

The two parties have been in detailed negotiations for the past several months in attempts to close the deal. The money made from the Tyler Perry transaction was expected to go towards paying the U.S. Army for the entire property over a period of time. 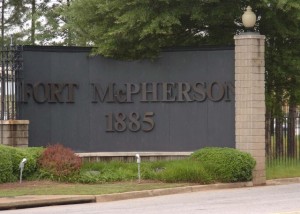 But closing the deal apparently has taken longer than either side had expected. Originally, the closing had been scheduled for mid-October, but that seemingly has been delayed to an undetermined date in the future.

Brian Hooker, executive director of MILRA, who was reached on his phone late Thursday night, said he was not able to disclose the status of the Tyler Perry deal. Hooker acknowledged that the MILRA board had been surprised Thursday evening by a news account suggesting that Perry was pulling out of the Fort McPhereson deal and would be reviving his plans to expand Tyler Perry Studios in Douglas County, where he already owns more than 1,000 acres.

Hooker, however, was cautious Thursday night not to speak prematurely.

“We are not ready, and I’m not authorized to communicate anything about it,” Hooker said. “There’s no comment. I’m hoping tomorrow around mid-day to be able to talk.”

Meanwhile, a MILRA community engagement group of nearby residents has been meeting to make recommendations on what kind of investment and involvement Tyler Perry and the City of Atlanta should make in the surrounding neighborhoods once a deal should close.

A MILRA board meeting was held Thursday night for the community engagement group to present its ideas to the MILRA board.

After the community part of the meeting, the MILRA board went into executive session – apparently to discuss the Tyler Perry situation and the news report.

Someone else close to the situation said that he understood that Perry had not pulled out and that the two sides were still negotiating the “finer points” of an agreement.

The Fort McPherson deal with Tyler Perry has had its critics with some people in the community questioning why MILRA did not follow a more open process to determine the future sale and redevelopment of the base.

There also was a federal lawsuit that had been filed this past summer against MILRA and Tyler Perry Studios by Ubiquitous Entertainment Studios (UES). For more than two years, UES had been interested in acquiring property at Fort McPherson to build its own movie complex.

In January, MILRA told UES that it could not negotiate to sell any of its property until after it had bought the property from the U.S. Army. But shortly thereafter, Atlanta Mayor Kasim Reed began holding talks with Perry, which led to negotiations between MILRA and the filmmaker – even though the property still belonged to the Army.

A federal judge essentially put the case on hold – saying that the court did not have jurisdiction until the agreement between MILRA, Tyler Perry Studios and the U.S. Army had been completed.

It is unclear if the pending lawsuit was one of the reasons why the closing of the Tyler Perry deal had been delayed. The base has been closed since 2011.

Previous Article
Genuine Parts’ new HQ fuels optimism of commercial developers
Next Article
Lee May, 73, taught us lessons of life – whether it be from news or the garden