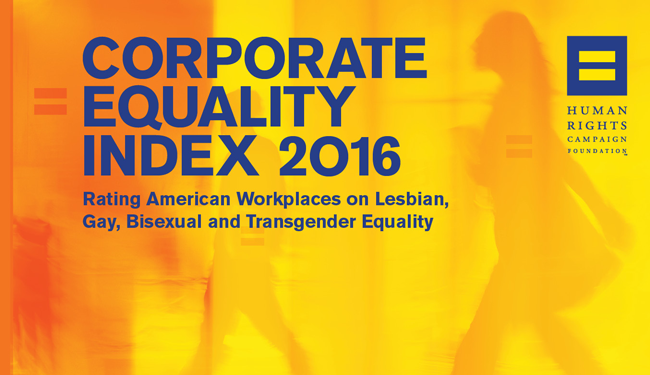 The president of the Human Rights Campaign – Chad Griffin – came to Atlanta Wednesday to highlight U.S. companies with the best records of inclusion for the LGBT community.

In Georgia, 13 companies reached a perfect score of 100 in the 2016 Corporate Equality Index assessing inclusion of lesbian, gay, bisexual and transgender individuals. There were only 11 Georgia companies with a perfect score a year ago. 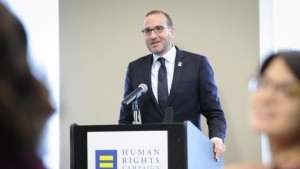 “Corporate America has long been a leader on LGBT equality, from advocating for marriage equality to expanding essential benefits to transgender employees,”  Griffin said in a statement. “But this year, many leading U.S. companies have broken new ground by expanding explicit non-discrimination protections to their LGBT workers around the globe. They’ve shown the world that LGBT equality isn’t an issue that stops at our own borders, but extends internationally.”

Griffin released the national LGBT Index at a Wednesday morning briefing at the Commerce Club.

Among the people who participated during the program were:

* Robin Joy Shahar, LGBT advisor for the City of Atlanta 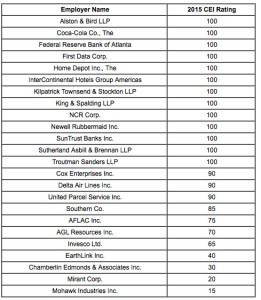 At the press briefing, the Human Rights Campaign released the 2016 Corporate Equality Index of 851 businesses – companies and law firms – in the United States, including a total of 24 in Georgia.

The 14th annual Corporate Equality Index unveiled that a record of 407 businesses earned a top score of 100 percent and the coveted distinction of “Best Places to Work for LGBT Equality.”

That record  number of perfect scores was achieved despite demanding new criteria requiring that companies with global operations extend non-discrimination protections for their LGBT workers worldwide.

* 511 companies participating in this year’s Index now offer transgender workers at least one health care plan that has transgender-inclusive coverage. That’s a 150 percent increase since 2012, when the Index first included trans-inclusive health care as a requisite for companies to receive a perfect score;

*   Gender identity is now part of non-discrimination policies at 75 percent of Fortune 500 companies, up from just 3 percent in 2002;

*   More than 330 major employers have adopted supportive inclusion guidelines for transgender workers who are transitioning.

*   And 176 Fortune 500 companies were given unofficial scores based on publicly available information. 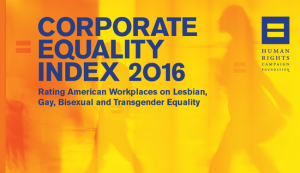 The average score for companies and law firms based in Georgia is 82 percent. The other seven Georgia businesses included in the 2016 Index scoring 75 or less were:

Griffin said the Campaign has witnessed the breaking of new ground in workplace equality based the LGBT community. Those include enacting LGBT non-discrimination policies to extending same-sex partner benefits. The Human Rights Campaign also has helped companies move toward full inclusion for their transgender employees.

* Demonstrated organizational competency and accountability around LGBT diversity and inclusion

The full report, including a searchable employer database is available online by clicking here.