U.S. Sen. Jon Ossoff (D-Georgia) meets with Rotarians and guests after his talk on June 27. (Photo by Maria Saporta.)

During his talk to the Rotary Club of Atlanta on June 27, U.S. Sen. Jon Ossoff made a plea for Georgia to revisit the development of high-speed rail to connect Atlanta with cities across the Southeast.

Ossoff said he was able to appropriate $8 million to conduct a “Stage One” Environmental Impact Study “for high-speed rail connecting Atlanta to Savannah by way of Macon.”

But that is just the beginning.

“This has the potential to be a really significant part of our state’s infrastructure future,” Ossoff told the Rotarians. “It’s an example of what one senator can do when we get involved in detail in the appropriations process. Because of the difficulty that we have as a country, accelerating the planning and construction of infrastructure, it’s possible this could take up to five years to complete.” 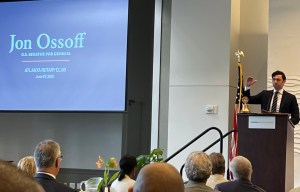 But Ossoff said he was going to try to “accelerate” that time frame by working with the Georgia Department of Transportation and other local stakeholders.

As he described it, the goal would be to have commuter rail links between Macon and Atlanta along the I-75 as part of Georgia’s long-term future of regional growth and infrastructure.

Eventually, Ossoff said he would like to have high-speed rail connecting Atlanta to Savannah.

Rotarian Milton Jones told Ossoff the idea is not new. About 20 years ago, he chaired the Georgia State Alliance for high-speed rail on behalf of the Metro Atlanta Chamber. He said the date and research for the 14-city Alliance could still be valuable as the senator pushes for greater rail connections.

Ossoff told Rotarians that he’ll be meeting with Pete Buttigieg, the U.S. Secretary of Transportation, in the next couple of weeks to discuss the Southeastern rail corridor.

“The Northeast region benefits tremendously from the maturity of intercity passenger rail in that area,” Ossoff said. “What’s really important is that we build a strong and sustainable business case and a model that won’t be unduly reliant on subsidies…  When you look at the growth trajectory of the Southeast region, this is one of the most economically sensible places in the country to build out that kind of rail network. And it’s also something that has united folks on all sides of the political spectrum here in metro Atlanta.” 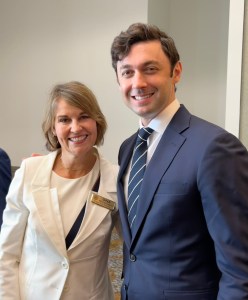 Gina Simpson, executive director of the Rotary Club of Atlanta, thanks U.S. Sen. Jon Ossoff after the June 27 program. (Photo by Maria Saporta.)

Ossoff went on to say there’s a coalition of cities that are working towards connecting Atlanta with commuter rail.

Given the congestion on Georgia’s interstate system, building commuter and high-speed rail will become necessary.

“The congestion is not going away,” Ossoff said. “We have to develop alternate modes of transportation.”

During his entire 40-minute talk at Rotary, several lightning rod topics were not discussed — even in the question-and-answer session, including the Supreme Court’s dismantling of Roe versus Wade abortion rights, the January 6, 2021 hearings on the Capitol Hill insurrection, immigration policies or the new conservative Supreme Court.

Instead, Ossoff focused his talk on bipartisan legislation that he’s been working on “beneath the waves of the most obvious and high-profile legislative battles that have been waged in the Senate.” He then outlined a host of initiatives that he said were more representative of what he does day-to-day than the stories that are in the headlines.

He talked about the bi-partisan Infrastructure Act, which passed the Senate with 68 votes “demonstrating that we can find common ground for the common good and quit factional partisan disputes and do what’s in the national interest.”

Other examples of bipartisanship Ossoff mentioned were the recent vote for gun safety measures as well legislation to deliver health care for veterans impacted by toxic exposure and burn pits in Iraq and Afghanistan.

Ossoff went on to describe several programs he’s worked on across the state — funding low-density, on-demand transit in Valdosta, stewarding Georgia’s natural resources from the Chattahoochee River to Tybee Island and the Okefenokee Wildlife Refuge among several other legislative wins. 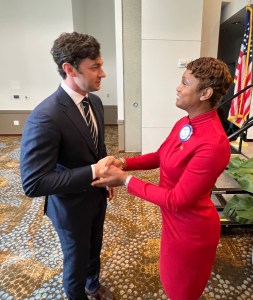 “The reason I wanted to take you all through this is that I think sometimes it’s easy to lose what’s happening behind the scenes all the time, every day in the U.S. Senate,” Ossoff said. “This kind of thing is more of my daily life than the big-ticket legislative fights that you’re seeing on CNN.”

Ossoff was asked about the political polarization in the country and whether there was hope for more bipartisanship in the Senate.

“I’m really worried about the level of polarization in our society,” Ossoff said. “It’s poison, There’s the growth of extremism and extreme political rhetoric, threats of political violence. The attempt to prevent the peaceful transfer of power from one administration to a duly elected successor should have us all. It’s a serious crisis, the level of polarization in this country and the lengths that some are willing to, to gain and hold on to power.”

Instead, Ossoff said he’s looking for opportunities to work with senators from both political parties.

“In my view, it’s one of the most important things I can do — to push back and to build functional working relationships with colleagues on the other side of the aisle,” Ossoff said. “First of all, is one of the only ways to get things done in the Senate. And second of all, when I have those relationships and building trust, I think I’m establishing some of that connective tissue that we need to build out across our society.”