The super, mega, wrap-around sign on the historic Medical Arts building on Peachtree Street downtown is all the evidence we need to show that our city is not working.

Complaint after complaint has been filed against the owners of the 384 Peachtree building — which is highly visible going north or south on the Downtown Connector — for violating the city’s sign ordinance.

This is not the first time this issue has come up. Last year, the building got taken over by ads, and eventually the city or the community put enough pressure on the building owners to take it down. 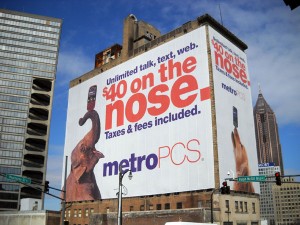 So why is it back?

He sent an email wondering why “MetroPCS would want to advertise illegally on a vacant building in downtown Atlanta that has quite a history of code compliance violations?”

But more importantly, Kessler wants to know why the sign is being tolerated by our city government.

Kessler sent an email to city leaders demanding action to get the sign removed.

“I appreciate your prompt attention to this matter and would encourage the City to take appropriate action regarding enforcement — understanding the City’s authorization to remove the illegal sign and place a lien on the property per Sec.16-28A.015,” Kessler wrote the city.

At the PEDs membership meeting last night, Kessler said the city still has not taken action against the building owners.

Wrapping around an historic building with a MetroPCS sign cheapens our city and diminishes our desire to become an attractive cosmopolitan community.

Ideally, the building owners would spend their energies trying to bring new life to the old building rather than creating a blight on our city’s skyline in order to make a quick buck.

No matter what, the city should not tolerate the sign being there for another day. And it needs to make sure that the building owners won’t flaunt the city’s sign ordinance and put up another mega billboard whenever it wants to.

Meanwhile, customers of MetroPCS should let their service provider know that paying money for such a gaudy and garish advertisement is doing the company more harm than good.

And the city should punish the building owners with every weapon in its legal limits.