George Harrison once said the ukulele “is the one instrument you can’t play and not laugh.” No wonder he spent his last days on earth playing one together with close friends.

As the days get longer and darker this time of year, laughter and lightness are harder for some of us to find. Enter the uke. 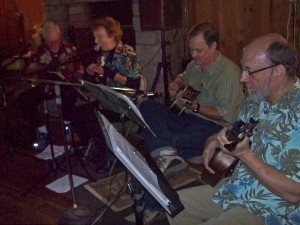 Before the weather turned cold, the Ukulele Society of Decatur played a free concert at Woodland Gardens.

Before the weather recently turned cold, I heard a ukulele group perform live at Woodland Gardens in Decatur. It wasn’t just the tinkling sound of this small instrument that brought a smile. It was the way the unimposing ukulele seemed to inspire goodness in these folks who play it.

John and Lynda Anderson, who are 66 and retired, and their Ukulele Society of Decatur persist in going out every other week to spread happiness for free. They play at senior citizens homes, farmer’s markets and other public events. Any money they make they give away.

“It’s not an intimidating instrument to pick up and play,” said John Anderson. “It’s an activity you can do with other people and it’s gratifying to go out and have people to respond to the music enthusiastically.

Listening to them, I thought about how easy it is to turn from a music maker to mere listener. I had met John and Lynda Anderson through an occasional participation in monthly jam sessions at a former AJC colleague’s home in Decatur. I like the way their two ukes tend to lift the occasionally dour quality of some of our renditions of rock and roll classics by the Rolling Stones, the Beatles and the Band.

At Woodland Garden I heard the quartet, which included Doug Allison and Pete Senkowski, play a variety of toe-tapping pop tunes from the first half of the 20th century. Among them: “Ain’t She Sweet,” “The Sunny Side of the Street,” and  “Autumn Leaves.”

They also played some Hawaiian favorites, such  as “Maui,” and “My Little Grass Shack.”

It’s a simple song  about a homesick Hawaiian boy who wants to go home to the kanes and wahines (boys and girls), eat fish and taro root and swim. It includes a tongue twisting refrain the audience was invited to sing:

“Where the humuhumunukunukuâpua`a go swimming by.”

It was a stretch but we eventually got it. The size and sound of the ukulele seemed to make listeners drop their reserve.

Once, Lynda Anderson recalled, an elderly resident at a senior home started playing his own harmonica as the group performed. The quartet later invited him to join them up front and sing.

The Andersons met each other four decades ago at the University of Michigan. After graduating, they married and moved to Atlanta. John Anderson, who had started on the clarinet at 12, got his wife interested in music. She picked up the dulcimer and the guitar and started performing in a Renaissance group and later, a country-folk band called The Stone Mountain Country Band. The couple also formed a polka group.

The Andersons said they began playing the ukulele on the back porch during the evening for fun and relaxation. The performing group evolved from that, about five or six years ago.

“I think it’s just been wonderful,” said Lynda Anderson. “I think I always had a lot of ability. I didn’t get to develop it as a child but I did as an adult. I really love doing it. It’s been amazing to perform. I never thought of myself being a performer.”

The Andersons’ story got me thinking about how I gave up playing regularly when I was about 17, when I realized I wasn’t going to be a rock star. Playing in bands, putting together gigs and lugging instruments around just felt like a lot of work.

I could see the appeal of the ukulele as a musical outlet that existed solely for fun and relaxation. Maybe that would have helped keep my interest fresh, as it did for real rock stars.

While researching this story, I discovered that other rock stars beside George Harrison, whose songs I cut my teeth and fingers over, got started in music playing the instrument which translated from Hawaiian means “jumping flea.”

Brothers Johnny and Edgar Winter, for example, both began playing the ukulele before grade school, a stepping stone to their respective guitars and keyboards. Brian May of Queen and Pete Townshend of The Who have been called “closet ukulele players.”

My search led me to the intriguing “Jimi Hendrix of the Ukulele.” His name is Jake Shimabukuro. He became internationally famous when his rendition of  “While My Guitar Gently Weeps,” went viral on YouTube.

Shimabukuro has noted that Bill Gates, Warren Buffett and Francis Ford Coppola, with whom he has jammed, have all picked up the ukulele.

“It blows my mind that these people, who have everything in the world they could want, have picked up the ukulele and found a little bit of joy,” Shimabukuro has said.

“If everyone played the ukulele, the world would be a better place,” according to Shimabukuro.

Since 2003, when my wife returned from a trip to Hawaii, I have had a ukulele gathering dust on our out-of-tune piano.

After listening to the Andersons’ group in the garden, and battling through some of these short, dark days of late fall, I now hear the little instrument calling to me.