“Pencil in your plans. Write your vision in ink.” This profound thought from Andy Stanley’s book Next Generation Leader has become evident in multiple facets this year. In January 2020, the 34 multi-disciplinary emerging leaders of the Urban Land Institute’s Atlanta District Council (ULI Atlanta) Center For Leadership (CFL)  were divided into 7 teams to provide technical assistance on land-use challenges posed by public agencies and nonprofit organizations. Every year, the Mini Technical Assistance Panel (mTAP) of the CFL program is a game-changer not only for the fabric of our cities, but also for the dynamics of the teams. The projects are typically addressed with significant hands-on collaboration, engaging client and community interactions, and are undertaken at a swift pace. So when March 2020 came with its own agenda of a pandemic, agility became the name of the game! With a commitment to the same vision, the plans for the mTAP process were adjusted and the class quickly realized that navigating this season will probably be one of the most indelible leadership lessons in their career.

These 7 projects that were selected by the class were characterized by distinct action words to describe the possibilities of the outcome and underline the common charge to make actionable plans: 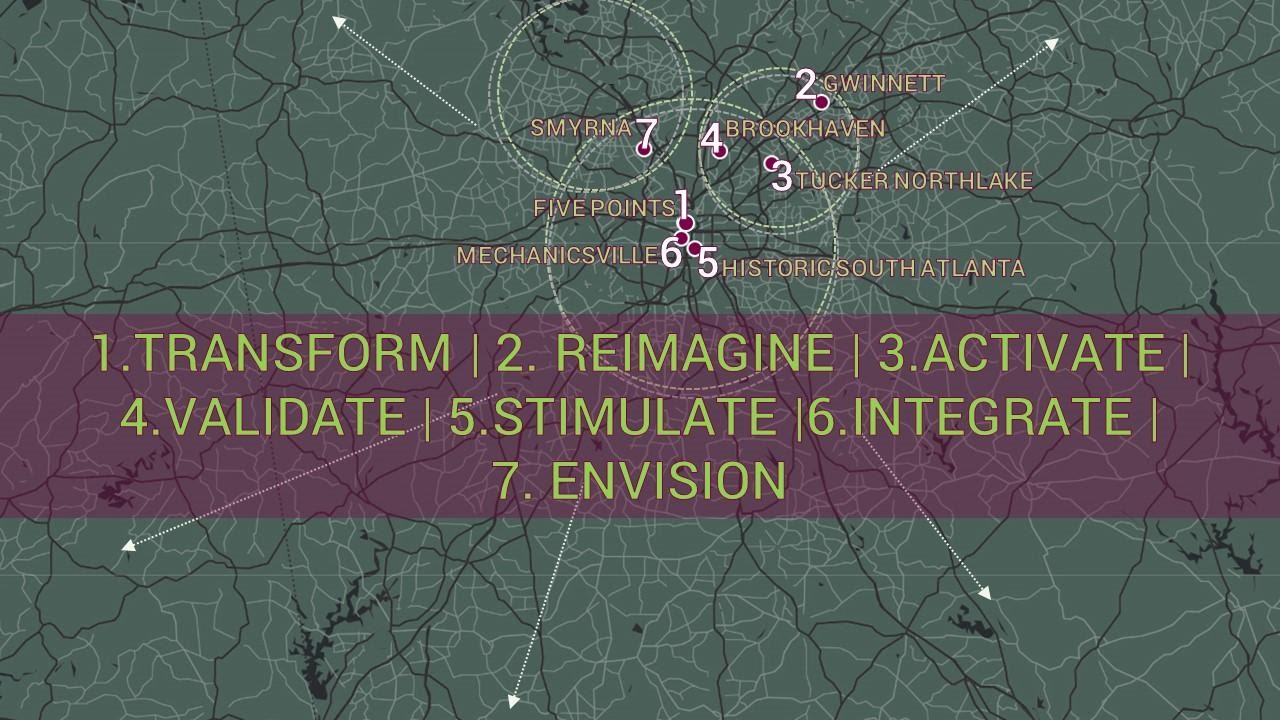 Using several online platforms, the class leveraged technology to maintain contiguity in the process and communication while repurposing software tools to fill the gaps and facilitate collaboration. Ploughing through personal and professional challenges, the teams worked strategically with their Clients to drive the projects in a mutually convenient pace. The result was a mosaic of recommendations that were rich in prospects and diverse in opportunities:

The objective of this project was to explore the development potential and define the future of Five Points Station. By drawing inspiration from local and national case studies and by capturing the spirit of Atlanta’s moniker as a “City in a Forest”, recommendations were outlined for the Station’s short-term activation and long-term use. A plan for public art and purposeful network of open spaces complemented the suggestions for the mix of uses proposed through thoughtfully articulated manifold phases.

The title is fashioned from being the home for the ‘Stranger Things’ show but the need was centered around positioning the 90 acre Gwinnett Place Mall site for redevelopment and for securing partners that will enhance the community, strengthen the business district, and facilitate long – term growth of the County. The team conducted a comprehensive SWOT analysis that unearthed the value of tactful incentives, adaptive reuse, potential zoning overlays and a framework to attract institutional investors, even at the midst of a global pandemic.

The CID had already established a relatively robust planning and design process, and hence the mTAP task became focused on how to breathe life into the alleys once built and support that activity both immediately and into the future. The team created a compelling multi-dimensional deliverable that started with a precedent analysis and demonstrated potential through zoning, public art, community iconography and green infrastructure.  They test drove the ideas of people-based placemaking by crafting relevant user personas aptly named: Longtime Locals | Brunch Bunch | Family of Four | After-school Crowd and this approach was highly commended by the CID audience.

The City of Brookhaven engaged with the CFL mTAP team in a Visioning exercise to formulate an entertainment district for a 22-acre assemblage along Apple Valley corridor (1/2 mile from MARTA). The result was an integrated site plan that exemplified the synergy between live-work-play programmatic elements taking into consideration the Peachtree Road Overlay District and prioritizing a multi-modal infrastructure. The economic impact of the proposal was also drafted along with an estimate of the anticipated construction cost. The team presented their findings and conclusions at the work session of the August City Council meeting and included a walk-through which garnered interest from a diverse audience.