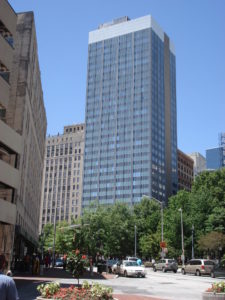 One Park Tower is across from Woodruff Park (Special: Wikipedia)

Lalani has purchased One Park Tower, located at 34 Peachtree St., for $12.75 million without any outside financing, according to a press release announcing the acquisition. The acquisition reflects the financial strength of the company and its ability to close quickly. Lalani said he will continue to explore other value-add opportunities in the Atlanta area.

The decision to buy the 300,000-square-foot office tower aligns with Lalani’s strategy of buying high potential real estate properties, such as Underground Atlanta. It also shows his commitment to investing near Five Points in south downtown.

Similar to Underground Atlanta, Lalani will take a local, hands-on approach to ownership and has already met with some of the building’s tenants, including HOPE Atlanta, a nonprofit focused on fighting homelessness, and Atlanta Downtown Improvement District, a public-private partnership and 501(c)3 nonprofit, charitable organization that strives to create a livable environment for Downtown Atlanta under Central Atlanta Progress.

“Lalani brings a fresh perspective to Atlanta’s commercial real estate scene,” said A.J. Robinson, president of Central Atlanta Progress, in the release. “Our hats go off to him for recognizing the potential value of this Downtown tower’s prime Peachtree Street location. We look forward to building our relationship with him and working together to enhance the Downtown experience.” 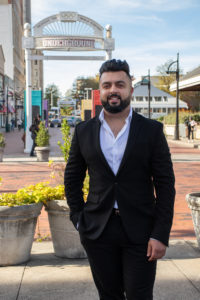 Park Tower is currently 33 percent occupied. Lalani is exploring a variety of value-add strategies and hiring an in-house broker to oversee leasing at the property. The building is located next to 100 Peachtree, the office tower with the digital Georgia’s Own sign, Lalani pointed out the opportunity to have a unique sign on the top of the 30-story One Park Tower, which he said would be visible from the freeway and the Mercedes-Benz Stadium.

“We are excited to expand our footprint and investment in Downtown,” Lalani said. “We are in the exploratory phase now, with the ultimate goal of maximizing the potential of Park Tower and building on the energy we will soon create at Underground Atlanta. We are out here multiple times a week, walking the streets, talking to people and meeting with businesses to learn more about what they want to see happen in downtown. We are passionate about making this corridor a vibrant, walkable place to be.”

Lalani is the CEO of Billionaires Funding Group, an Atlanta-based company with a real estate portfolio that spans over two million square feet of commercial space. He has completed more than 100 real estate transactions that are valued at approximately $250 million. The majority of Lalani’s real estate assets are located in Georgia.

Historically, 34 Peachtree used to be known as the Bank of Georgia, and it used to have prominent signage on the downtown skyline.