Untangling Homelessness: Thankful for Difference Makers on the Front Lines

A perennial issue in any urban district is homelessness. While nationally homelessness is trending upward and other cities have seen sharp increases in recent years, the City of Atlanta has seen a 25 percent decrease since 2015 (Partners for Home 2019 Point-In-Time Report, p10).

Still, more work remains to be done. And without context, it’s natural to ask, “why doesn’t somebody do something about homelessness in Atlanta?”

The answer we found is that a lot of important work is happening all across the City – by many different organizations – to help change the circumstances of the estimated 3,217 people in the City of Atlanta who are experiencing homelessness. But the individual difference makers are hard to find until you start digging.

This season, Midtown Alliance set out to examine this complicated issue in our district, where 100K people spend time every day, including those without a roof over their head. I met people on the front lines to find out what’s getting done, including City of Atlanta agency staffers, a well-known attorney turned homeless advocate, aid workers, public safety personnel and people who are homeless, or have been. Here are some things I learned:

1. Trust is being cultivated on the ground every day, before most of us are even awake.

I went on two pre-dawn ride-alongs with Midtown Blue Public Safety Officer (PSO) Byron Watkins as he conducted welfare checks on the district’s homeless. Every weekday at 6am, this former military police officer goes out on patrol, alone – with only a radio and a flashlight – to wake up people sleeping on private property, parking decks and in the public right of way, to check on their well-being, and to ask them to move along.

In these daily interactions, Officer Watkins also listens out for opportunities to connect people with shelters, food banks and other resources. Fellow Midtown Blue PSOs Kristian McClendon and Chandral Pickett built their own playbook for solutions, vetting, compiling and establishing relationships with a list of service providers touching many facets of the issue, including crisis intervention, medical training, soup kitchens, job opportunities and more.

Each day, these public safety professionals are building trust with each homeless person they encounter. They know their stories. They know what their issues are.

2. If homelessness were an easy problem to solve, it would be solved by now.

It can take an average of 9-15 encounters over many months before a person is willing to accept services. On patrol, PSO Watkins introduced me to a young man who calls himself “Believe.” He told me he prefers to live on the streets because a shelter feels too confining and limits his freedom. Several homeless outreach organizations have let him down after promising help in the past, but he told me remains hopeful that “his day is coming” to find a home.

Sometimes when Believe is hungry, he goes to Lutheran Church of the Redeemer, which runs a food ministry that recently marked a major milestone with its two millionth meal served since 1982. While volunteering with others to serve meals at the ministry, I learned that food insecurity has many faces: although I did see some in tattered clothes, I also observed men in ties, women in dresses and people in restaurant uniforms who were gearing up for a day at work.

3. Change happens one person at a time.

In my research, I heard many heart-rending stories of loss, but also tales of restoration like that of Clarence, a 43 year-old man who recently got off the streets and into supportive housing.

Clarence met me for coffee on a Saturday morning. At first I was a little uneasy meeting a total stranger to talk about his experience with being homeless. Articulate and soft-spoken, Clarence told me he came to Atlanta to attend school and pursue a career as a film director around 2000, and has since endured a series of losses that led to multiple instances of homelessness: first his financial aid fell through, then various jobs didn’t work out and, this year, the unexpected and emotionally crippling death of his sister.

His turning point: Midtown Blue PSO Pickett spoke with Clarence on the street and gave him information she compiled on where to look for housing and job opportunities. Clarence used it to get into housing and find a job as a security guard.

4. It may not always seem evident, but progress is happening.

It can be difficult to see the edges of Atlanta’s homelessness challenges. That’s because everyone’s story is different. Many are battling mental illness. Others addiction to controlled substances. Some are military veterans. Others are survivors of domestic abuse. And the work product of Atlanta’s intricate mosaic of public-private outreach initiatives – which are quietly delivering hundreds of units of supportive housing – isn’t covered widely in media, or regularly discussed by leadership.

It may not always seem apparent, but progress is happening.

For more stories about Atlanta’s homeless and those working to help them, check out our three-part “Untangling Homelessness” series on Midtown Alliance’s website. And in this season of gratitude, if you are motivated by what you read, please look into how you can get involved with a local food ministry or homeless outreach program. 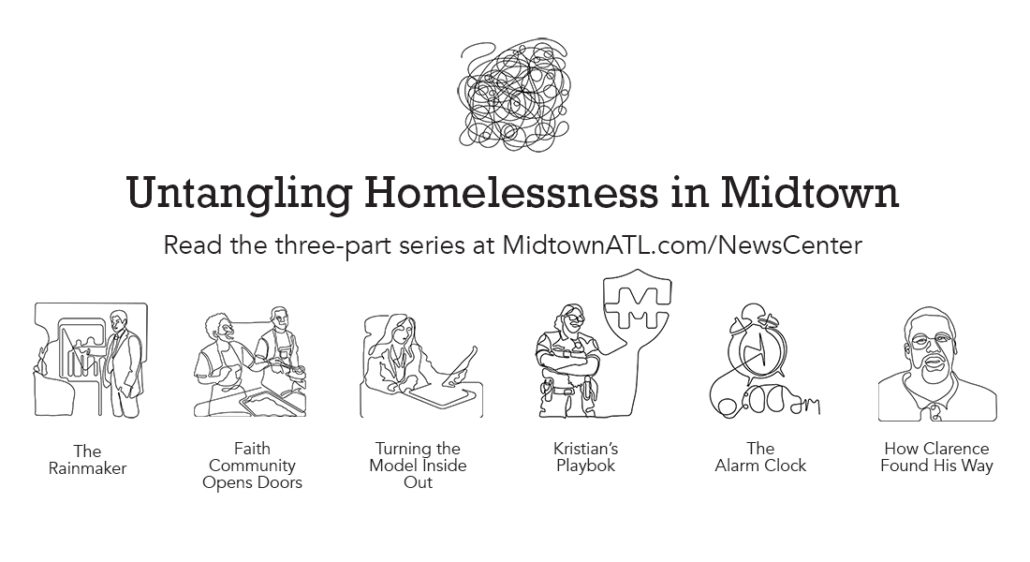