Jay Bailey, CEO of RICE; Carol Tomé, CEO of UPS; and Atlanta Mayor Andre Dickens at the opening of the new mini-logistics hub on the RICE campus. (Photo by Maria Saporta.)

RICE was launched in March 2017 as a business generator for Black entrepreneurs and helping them overcome barriers to grow their companies. The 54,000-square-foot facility is the largest center of its kind in the United States.

On Wednesday morning, key officials held a ribbon-cutting ceremony for the UPS Logistics Launchpad — a collaboration of UPS, the UPS Store and Ware2Go, a UPS company that provides on-demand warehousing and fulfillment services — at the RICE campus on Fair Street.

The building formerly served as the headquarters of the H.J. Russell & Co. construction firm, and RICE was established by the family of the late Herman J. Russell, one of Atlanta’s most famous and successful Black entrepreneurs.

“There is someone out there right now on the Westside with a big idea,” said Jay Bailey, CEO of RICE, declaring the nonprofit as Atlanta’s home for Black entrepreneurs. “People on the south side of the tracks don’t ever reach the marketplaces because they don’t believe they belong.”

RICE is working to change that. Bailey said it has received $40 million in funding that currently is working with 200 full-time entrepreneurs. It also has 4,000 people in its network, Bailey said.

Back in August 2020, RICE began having conversations with UPS — connecting first with Ayana Green, the company’s vice president of small and medium business strategy. 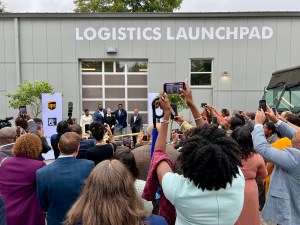 “Ayana Green, she believed in our vision,” said Bailey, who then listed more than a dozen UPS leaders who have been involved in setting up the mini-logistics hub. “It’s more than a check. This is not a transactional relationship.”

UPS will be working with RICE companies by offering warehousing, shipping, fulfillment, and most importantly, training on logistics and supply management.

Carol Tomé, president and CEO of UPS, was on hand for the ribbon-cutting ceremony.

“What an inspirational way to start the day,” Tomé said. “We have a common purpose. We want to grow jobs. We want to change lives. We want to make a difference in the communities where we live and work. What an exciting day to launch our logistics launch pad.”

Not only will the relationship be good for the participating entrepreneurs, Tomé said it was also good for UPS to build these relationships.

“It’s a win-win all day long,” she said. “Supply chains are really complicated. We are going to teach people on how supply chains work. It’s exciting to give back to this city. We care so much about Atlanta, and we love RICE.”

Green described the partnership by saying: “We are literally bringing the best of UPS to the RICE community.”

“We have a growing list of Fortune 1000 companies,” Dickens said, adding that it’s small and medium-sized businesses that are the pathways for many to improve their lives. “We have been intentional. It’s not just about capital. It’s also about talent development and resource development. By having global logistics training, that knowledge is powerful and translates into capital.”

The last speaker was Kevin Warren, UPS’s chief marketing officer, who talked about the purpose of UPS and its relationship to the community. After Tomé began her role at UPS in June 2020, she asked her top managers to talk about “our why.” They came up with the tagline: “Moving our world forward by delivering what matters.” The notion came true as UPS became a top shipper of COVID vaccines around the world.

“We believe there’s symmetry between moving goods and moving our world,” Warren said.

At the end of his comments, Bailey summed up RICE and its partnership with UPS.

“This is only the beginning,” Bailey said. “Literally, in this building, we will manufacture hope for a community that needs it.”