By Guest Columnist SUSAN VARLAMOFF, director of the Office of Environmental Sciences at the University of Georgia

Atlanta is ripe for urban agriculture. It has a high unemployment rate and homelessness abounds. Food deserts, where fresh food is nonexistent, cover half the city. The state ranks No. 2 in obesity, largely due to poor diets.

The movement is supported by the Atlanta Local Food Initiative, which encourages consumers to request locally grown food in their supermarkets and restaurants.

Environmentalists see no sense in transporting lettuce from a California farm to an Atlanta table, leaving a wake of greenhouse gas emissions behind, when it can be grown in Georgia and in the city.

Atlanta Mayor Kasim Reed will break ground on the Trinity Ave. farm across from City Hall in 2012 to show anyone wandering down its paths how to grow vegetables and fruits in their own backyards or neighborhood lots. 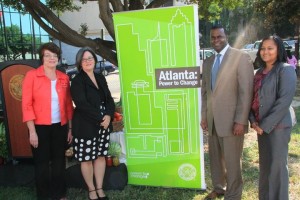 Atlanta Mayor Kasim Reed at his press conference with partners — UGA, Sustainable Atlanta and Wal-Mart — unveiling his plan to establish a farm across from City Hall

Atlanta BeltLine’s leaders are investing in farms and community gardens along the transit’s green corridor to bring fresh food to nearby neighborhoods and restaurants.

The English Ave. neighborhood, where foreclosures and abandoned homes litter the landscape, will undergo a renaissance.

Entrepreneurs collaborating with the Prince Charles Foundation (yes, the Prince of Wales) will upgrade the homes to LEED standards and locate an organic farm, a fresh market and food hub in the neighborhood.

The Atlanta Mission, the city’s largest homeless shelter, now boasts a community garden where the men cultivate vegetables year round to supply the mission’s kitchen with fresh food. 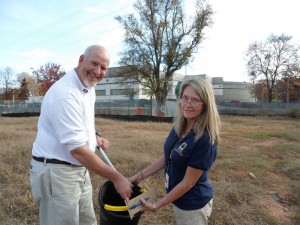 The University of Georgia College of Agricultural and Environmental Sciences provides technical assistance to rural farmers. Today, CAES is seeing a huge surge in requests for assistance on how to grow food in the city.

Most importantly, Mayor Reed provides the bold leadership to make Atlanta a model for sustainable urban agriculture. Through his “Power to Change” sustainability plan, he pledges to bring local food within 10 minutes of 75 percent of all residents by 2020. The Trinity Avenue farm is a down payment on this promise.

Growing food in the city requires more than just digging a hole, placing a plant and reaping the harvest. Urban sites are a challenge. Soils may be toxic from previous uses, tall buildings may shade the lot making vegetable gardening difficult and the land may be covered in concrete and asphalt. And if vegetation is sparse, bees needed to pollinate the plants may be absent. 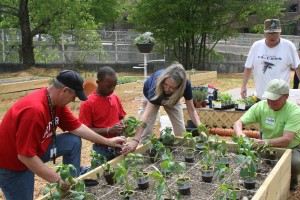 Wheat Street Garden in the historic Fourth Ward area is now a safe community-gathering place that was once a hangout for the homeless and sex and drug traffickers.

The Atlanta Community Food Bank distributes canned food to the disadvantaged and has seen a 34 percent increase in 2011 over the previous year. However, a steady diet of processed food, often high in sugar and salt, leads to obesity. So, they have launched 175 community gardens to supply fresh food to the poor. 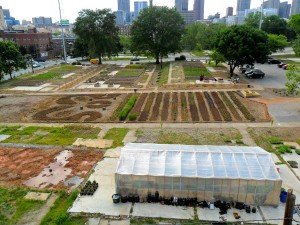 Environmental benefits are many. Shortening the transport from farm to table reduces greenhouse gas emissions.

Through photosynthesis, a process in which plants make their own food, plants absorb the greenhouse gas carbon dioxide and release oxygen used by humans in respiration. Plants cool the air through transpiration and can reduce the urban heat island.

Lastly, cultivating fertile soil to grow food takes carbon out the air and stores it in the earth reducing the effects of climate change.

Urban farming is not a new phenomenon. During the 1893-1897 economic recession, Detroit Mayor Haze Pingree instituted potato patches to feed the poor and employ the unemployed while saving the city money in social services. 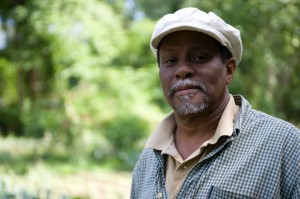 In World War I and II, Liberty Gardens and Victory Gardens produced million of pounds of food from backyards and vacant lots. Today, with the Great Recession and environmental issues looming large, urban agriculture makes even more sense.

As the poster child for sprawl, metro Atlanta has plenty of open spaces for farms and community gardens.

Due to its warm climate and long growing season, food can be grown year round. Right now lettuce, broccoli, cabbage and kale are growing in downtown Atlanta. According to Nuri, the demand for local food far outstrips the supply.

Since colonial days, agriculture has been Georgia’s leading industry, worth $69 billion annually. CAES has supported this industry successfully for 150 years through its research, teaching and outreach programs.

The college maintains a laboratory to help farmers and gardeners to test their soil and water to be sure it is contaminant-free and contains the right nutrients and pH for sustaining their plants. If there is a problem, scientists provide recommendations to improve it. 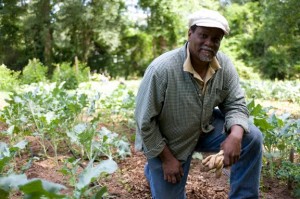 No one organization can do the job. It will take a coalition of academics, municipal agencies, community leaders and nonprofits to provide the technical assistance, regulation and oversight, community organizing, funding and education to develop and implement a strategy.

New York and Philadelphia have commissioned studies to determine the potential for urban agriculture within their cities. The studies serve as a blueprint to site gardens in areas where fresh food is most needed and where the land is most suited for cultivation.

Atlanta has strong leadership, a robust local food movement and countless organizations needed to create a sustainable urban environment by connecting people to their food systems.

Our success lies in our ability to convene the players, plan the strategy and systematically work the plan until fresh food is available to all Atlantans regardless of where they live.