Urban Atlanta youth use muscle, risk to master complexities of the harp 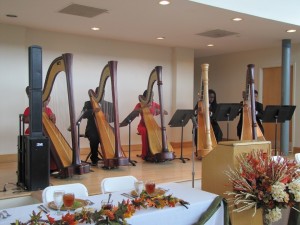 Of all the instruments, one of the biggest and heaviest, most expensive and most exotic is the harp. A performer must play each foot and hand separately, using everything but pinkies to create the ethereal notes.

That is the muscle behind the dreamy soundtrack of the Atlanta Urban Youth Harp Ensemble. Most of these young musicians have overcome major disadvantages to master the instrument’s complexity, earn gigs at local weddings and events, qualify for college scholarships and position themselves for professional music careers.

The home base for these harpists has been the New Schools at Carver. Some students are from stable homes, but in this census tract, an estimated 57 percent of families with children under age 18 live in poverty. For families headed by single moms, poverty rises to 75 percent.

These musical learners have one common trait: fearlessness. They have to believe that they are as special as the harp itself.

On Sunday, their story is going national with an appearance on CBS This Morning. That exposure should boost the crowd expected Monday for their annual free holiday concert at the New Schools of Carver, the performing arms public high school just south of Turner Field. The concert begins at 7 pm in Leete Hall, 55 McDonough Boulevard.

“These are children who are willing to take a risk,” said Roselyn Lewis,  the program’s volunteer director and fundraiser. “They have to be a risk taker to try something new and different. They aren’t the ones who stay in their own little lanes and never venture out.”

“Not many people play the harp,” said Taylor Bell, 12, who is learning at Drew Charter School in East Lake, where the UYHE will be based in the near future. “It gives me bragging rights.”

“Through harp, I have gotten an advantage, something that sets me apart from everyone else,” says Tylyn Stewart, now studying music at Columbus State. 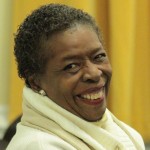 By mastering the harp, other challenges – academics, going away to college, breaking out of poverty – are not as daunting. This instrument becomes a positive anchor, a swooping symbol of self-confidence.

“The harp has meant everything to me,” said Gerald Waller, who said it helped him feel less overwhelmed by higher education. He became the second person in his family to go to college.

“It helps you inside school,” he said of the harp. “My math skills were weak, and I was struggling. When I started playing the harp, they soared to the sky. Playing the harp has helped with my memory.”

The soothing effect that King Saul felt when listening to David is still in play for these students.

“The harp has given me grace and relaxation,” said Lanajia Artis, before she graduated from Carver this year. “When I come to harp class, I feel relaxed. It’s a feeling within the soul.” 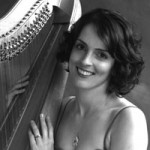 What began in 2000 as two students learning from Elisabeth Remy Johnson, the principal harpist of the Atlanta Symphony Orchestra, has grown into 60 students learning this ancient instrument from their own salaried artistic director, Carolyn Lund.

The major force and funding for the ensemble comes through Lewis, a retired music teacher who taught almost all of her 40 years in the Atlanta Public School system.

Her passion and leadership helped secure large grants from the NEA, Hank Aaron Chasing the Dream Foundation, the Arthur M. Blank Family Foundation, Fulton County Arts Council and the City of Atlanta Office of Cultural Affairs. Through the city’s Power2Give match funding, the group raised $5,000 for Adopt a Harpist and is now seeking donors to help purchase Patrice the Practice Harp. 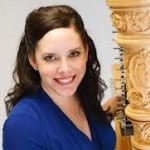 Their uniqueness in the harp universe drew a $2,000 donation from French-based harp manufacturer Camac, which published a feature story about the UYHE on its website.

Yet Montanez Baugh is on a full scholarship at Bard University, Melvin Carter attends Georgia State on a music scholarship, as does Desmond Johnson, who last weekend played a gig at the Wren’s Nest Holiday Open House.

“Their success was not the outcome I predicted,” Lewis said. “They tell me they like it because it’s big, takes power to play and it makes them stand out in a crowd.” 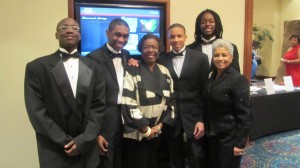 The poverty that many of these musicians live in stands in contrast to the expense of their instruments. Lever harps cost about $5,000 and pedal harps several times that much.  The board members for this nonprofit sometimes pitch in out of their own pockets for the gowns and suits expected at public harp performances. The program’s annual budget is about $80,000.

A longtime member of Friendship Baptist Church, Lewis leads the handbell choir there. Her knack for precision carries over into an expectation of excellence from the harp ensemble students. “I believe in divine order,” she said. “This is my missionary work.”

Before she retired, Lewis chose the program’s first two students from her music classes at Brown Middle School, not far from the West End MARTA station.

The boy she picked, Mason Morton, went on to graduate from Rice University and then enroll for his masters at Boston University. He studies under Ann Hobson Pilot, a legendary African-American harpist, and has a gig teaching harp to six middle schoolers in Boston Public Schools.

With muscle and risk, it could be their ticket too.