An Xpress commuter bus, part of a fleet that is seeing ridership slowly crawl back from pandemic losses. Credit: State Road & Tollway Authority

Ridership in the metro area’s state-subsidized vanpool program is outpacing that of the Xpress commuter buses for the first time — and that’s just one of the topsy-turvy pandemic effects that has transit planners with the Atlanta-Region Transit Link Authority (The ATL) scrambling to keep up.

“This is the first time I can remember ever seeing this happening,” said Jamie Fischer, the official in charge of data analysis for the Georgia commuting programs, at a May 6 meeting of the ATL’s Xpress Operations Committee. She said the latest numbers, from March, showed 522 average daily vanpoolers, compared to fewer than 400 Xpress riders. That’s roughly 27% more vanpoolers than bus-users, while Fischer said Xpress ridership had a 25% edge pre-pandemic. 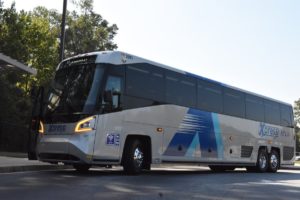 An Xpress commuter bus, part of a fleet that is seeing ridership slowly crawl back from pandemic losses. Credit: State Road & Tollway Authority

Xpress data had many other tea leaves for planners to read as they try to plot a post-apocalypse service for fiscal year 2022, which starts in July. Ridership has crawled back to the range of 8% to 9% of pre-pandemic levels; how much higher will it go? Fare collections are outpacing the ridership, at around 20% to 22% of pre-pandemic numbers — but will employers continue subsidizing the monthly pass programs that are likely boosting that figure? Can Xpress keep up an on-time performance rate that shot to over 90% thanks to the pandemic drop in bus-blocking traffic?

For part of the answer, the ATL and affiliated state agencies are asking the public. A customer satisfaction survey for Xpress riders past and present is available online here. The survey will be available at least through May 10 and may be extended further.

One Xpress item not in doubt, planners said, was financial stability of the service, which runs 27 routes in 12 metro counties, shuttling commuters to Atlanta’s Downtown and Midtown as well as Perimeter Center. Even if ridership numbers stayed the same, Fischer said, planners expect a 7% to 9% budget surplus despite the pandemic battering due to conservative estimates.

In fact, Xpress expanded May 3, adding two new routes serving Bartow, Cherokee and Cobb counties. Routes 484 and 485 both use the new Hickory Grove Park & Ride lot in Acworth. Both routes are fare-free until September as an inducement.

At the May 6 meeting, the committee recommended approval of a balanced FY22 budget of $29,082,286, a figure that factors in such elements as lower spending on fuel. The committee also recommended renewing a vanpool service contract with Enterprise for $1.2 million. The full ATL board will consider both items at a future meeting.

The pandemic’s impacts on rush hour and telecommuting took planners largely by surprise. Officials at the Atlanta Regional Commission, an agency that advises the ATL and many others on transit and transportation, have said they are rethinking traditional planning methods as the pandemic continues to toss curveballs, like traffic congestion that persists at midday and on weekends.

For Xpress, a big question is how, when and whether to ramp up service. And for the ATL, a renewed focus on vanpooling may be a lasting pandemic legacy.

When the pandemic tossed a roadblock in front of everyone in March 2020, Xpress did not eliminate routes, but did reduce the number of trips. It also suspended fare collection on all routes from April through August 2020. One enticement to return came in September, when Xpress launched a mobile payment system called “Token Transit” and a fare-capping pilot program that saves riders a buck by converting two one-way tickets in Blue and Green zones to a round trip.

Still, the ridership impacts have been brutal, according to numbers presented at the committee meeting. In January 2020, the average daily boardings on all Xpress routes were 7,630. In January 2021, that number was 690. By March 2021, the latest data available, those numbers had inched up to 759.

Gail Franklin, the system’s chief transit officer, said staff members are conducting “equity analyses” of how riders are affected by service changes. A basic part of that is a “reset” of the baseline amount of service. That is still to be determined, she said, as planners don’t know if commuting patterns have changed permanently. The basic approach is to allow a margin for service to be ramped up incrementally if demand increases, she said.

Xpress fare collections also remain a fraction of the pre-pandemic amounts, with monthly revenue since August hovering around $80,000 to $90,000. In March 2021, the fare revenue was $68,000 from Breeze system users, $6,888 in cash, and $2,584 in mobile ticketing. Mobile ticketing is now about 3% of total revenue and increasing, Fischer said, which is good news for that new technology.

But since January, fare revenues have declined slightly each month, and Fischer said planners can’t yet tell whether that is a “blip” or a trend. The background concern, she said, is that employers might stop subsidizing monthly Xpress passes due to the decline in ridership. “So we’re watching it closely,” she said. 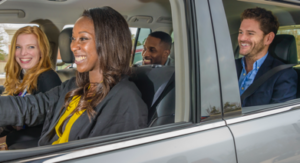 The vanpool program is separate from Xpress but overseen by the same agency, the State Road & Tollway Authority. The program offers financial subsidies and vans provided by private contractors to self-organized groups of commuters whose schedules and destinations allow them to drive together. Many vanpoolers gather through the state’s Georgia Commute Options program.

Vanpooling took a pandemic hit, too. Fischer said that pre-pandemic, the program had 260 to 270 vans on the road. As of March 2021, that was down to 124. And ridership was suppressed as well, because of per-vehicle occupancy limits imposed as a pandemic precaution.

Nonetheless, the vanpool program’s daily average of around 500 passengers is outpacing the commuter buses. Fischer said it’s “remarkable… [that we have] more vanpool riders right now than Xpress riders.”

“Frankly, I’m surprised it’s that high,” said Tom Weyandt, a committee member who represents the Atlanta-centered District 5 on the ATL board. “Apparently, it’s an important part of the system for a lot of people.”

Weyandt said the ATL should be pleased with that vanpool ridership and that the committee should get regular updates about it, a call that was echoed by some staff and other members.