Vernon Jones from the SaportaReport database.

Vernon Jones, a former Democrat turned staunch supporter of former President Donald Trump, has announced his campaign for Georgia governor. He will be running against incumbent Brian Kemp and any other challengers who might emerge.

Jones held a press conference on Friday, April 16, in front of the Georgia Capitol to announce his candidacy.

His political career began in the early nineties when he served as the state representative for District 57 and later District 91. He also served as the CEO of DeKalb County.

Jones openly supported Trump during the 2020 election cycle and announced that he would be joining the Republican Party early this year. 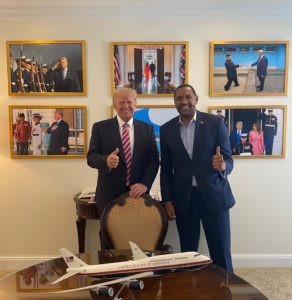 Vernon Jones posted this photo to his Facebook page with the caption, “Georgia will never be a blue state. We’re going to make sure of it.”

His website and Facebook page include photos of himself with Trump, seemingly using the 45th president to garner support.

Trump has not endorsed Jones, but in January, he pledged to help ensure that Kemp isn’t re-elected.

“I’ll be here in about a year and a half campaigning against your governor,” he said at a rally in Dalton, Ga.

Throughout the event, Jones asserted that liberals were working against him, and described himself as a leader who will “fight for [Georgians], despite attempts and intimidations from the radical left, woke corporations, cable news pundits or out of touch Hollywood celebrities.”

He added that major news outlets, referencing the Atlanta Journal-Constitution repeatedly, will soon speak negatively of him in the press because “they know the Governor can’t beat Stacey Abrams and what’s more frightening, they know Stacey Abrams can’t beat Vernon Jones.”

Jones ended his announcement by saying that he’s ready to slug it out.