One of Atlanta’s grand dames — Veronica Biggins — was inducted Tuesday morning into the Atlanta Business League’s Women of Vision Hall of Fame.

The Women of Vision breakfast honored 100 African-American women from Atlanta, but it Biggins who received the top award for her decades of involvement in local business community.

Biggins described her career as having had three different chapters.

She worked for C&S Bank (which later became NationsBank and Bank of America). Then she joined President Bill Clinton’s administration as head of White House personnel. And her last chapter has been in the search consulting business. That began with Heidrick & Struggles, then Hodge Partners and now with Philadelphia-based Diversified Search. 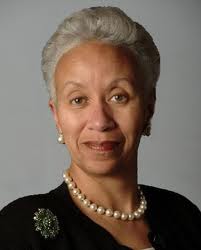 Interestingly enough, Diversified Search was started more than 35 years ago by Judith von Seldeneck, who is veteran search consultant who has worked with women executives for decades. It is the largest search firm in the country that was founded and is owned by a woman.

Last year, Biggins also was named as the first African-American to join Southwest Airlines’ board of directors. She had been on the AirTran Airways board for a number of years until it was acquired by Southwest.

At Tuesday’s breakfast, Biggins asked Ellen Torbert, vice president of diversity and inclusion for Dallas-based Southwest, to stand up and be recognized before the Atlanta crowd.

Biggins also mentioned two mentors — Geri Thomas and Xernona Clayton — women who have worked hard to lift other women throughout their careers.

Then Biggins shared a few life lessons with the ABL audience.

One: “Make sure that you in fact are helping someone else,” she said. “We should all be reaching back and helping (younger women) learn those hard lessons.”

Second: “We should always seek to empower ourselves,” Biggins said. “Each of us every day should be learning something new.”

Third: Biggins credited Spelman College President Beverly Daniel Tatum for her next point. “Average is over,” she said. Women should explore “what do we do that is unique because average is over.”

And fourth: “I firmly believe that life is not a dress rehearsal. We get one chance at this. Don’t ever look back and have regrets.”

Biggins finished her comments recalling that when word got out she would be inducted into the Hall of Fame, she received several emails asking her if she was about to retire.

By the way, the chair of the breakfast was William Pickard, chairman and CEO of Global Automotive Alliance. During the breakfast, he said he had been so inspired by the many powerful women in the room that he was donating $10,000 to the Atlanta Business League.

He also recalled something that his grandmother used to say.