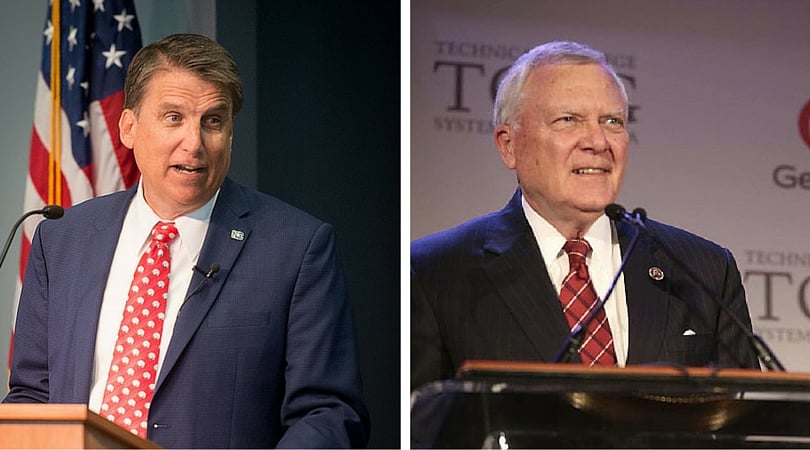 When you dance with an elephant, where you start from matters a lot. Case in point: Nathan Deal and Pat McCrory.

After vetoing the “religious liberty” and “campus carry” bills here in Georgia, Deal’s approval rating has risen a tad, according to the latest AJC poll. He’s a lot more popular now with Democrats, but the best news for the governor may be that while his actions cost him 20 percent of the Republican support he had at the beginning of the year, he still has an approval rating of 58 percent within his own party.

Deal also has the great advantage, when waltzing with a pachyderm, of being in his second term. New versions of the same bills will be back next year, but what happens to them will be an issue in the next governor’s race, not his.

This is not the position North Carolina Gov. Pat McCrory finds himself in. Amid the furor over HB2, the so-called “bathroom” bill, Democratic Attorney Roy Cooper has opened a lead over McCrory in this year’s governor’s race. McCrory’s attempt to moderate the bill with an executive order, after signing it, has done him no good politically.

It would be easy to say that McCrory should have done what Deal did, and reined in the conservative legislators who passed HB2 with a veto. But that, again, is the thing about dancing with an elephant.

Deal could authentically write his veto messages from the perspective of a church member and a gun owner. McCrory is the former mayor of Charlotte, which passed the ordinance allowing transgender people to use the bathroom of their choice, which HB2 struck down. He was looked on as something of a bridge-builder as mayor, which automatically makes some conservatives suspicious.

McCrory has already tangled with the North Carolina legislature over who had the authority to oversee the clean up of coal ash ponds operated by Duke Energy, McCrory’s former employer. The governor won that issue in court, but another big battle with conservatives over the bathroom bill may not have seemed such a good idea in an election year.

Moreover, HB2 is about much more than bathrooms. It also ends a push in Durham for an increase in the local minimum wage, and has resulted in the closure in Charlotte of a contractor’s anti-drug program which McCrory championed as mayor. It’s a significant escalation of the growing friction between conservative legislatures and local governments on a number of issues.

Last week Art Pope, of all people, offered a tidy solution to the state’s problems with the bathroom bill. Pope, the conservative retail magnate who masterminded the Republican takeover of North Carolina’s legislature and served as McCrory’s budget director for two years, said that a blue-ribbon commission should be appointed to sort things out. He also suggested that if the Charlotte ordinance had a little tighter language similar to an LGBT protection measure passed in Utah, it would be just fine.

Unsaid but explicit in that suggestion is that the other stuff in HB2 — the provisions which ban local governments from setting a minimum wage, or imposing any local standards on contractors, or instituting protections in local employments standards, means a lot to somebody, as much or more than the issue getting all the attention in the news. If the part about the bathrooms has to be tinkered with to get everything else, so be it.

McCrory may have felt himself incapable of standing in front of an elephant loaded with that much agenda. The North Carolina legislature conducted a one-day special session to pass the bill, and the governor signed it right away. That, to use the terminology of country songs, was where the heartache started.

It will be interesting to see how all this plays into the campaign math of the presidential election. It’s a close race in both states, but Hillary Clinton has polled a little better in North Carolina (or that is, there have been more polls in North Carolina and Clinton has led in some of them.) Pope has already said he won’t support Donald Trump, and the presumptive Republican nominee has already dissed the bathroom bill, and backtracked from his diss.

In Georgia, meanwhile, Deal has quietly signaled his support for his party’s nominee, and there’s no news for Trump to get tangled up in when he comes here. Which he may often, if the race here stays this tight.