Victory over despair — the power of art to heal the powerful 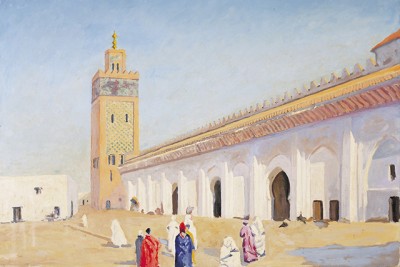 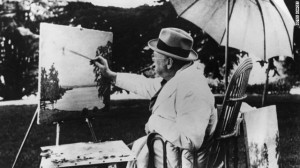 Without a doubt, Winston Churchill is one of the most important political figures of the 20th century — or of any time. A man who withstood ostracism after the disastrous Gallipoli campaign of World War I and who entered a “political wilderness” (again) in the 1930s owing to his controversial positions on English monetary and colonial policies, Churchill emerged in 1940 as the British prime minister who rallied the hearts, minds, and determination of his people in the war against Hitler’s Germany. It is important to recognize that when Churchill came to power, the Third Reich was already dominant in the European continent and North Africa (Hitler’s fascist ally, Benito Mussolini, held power in Italy). The United States, with an isolationist movement picking up strength at home, was wary of any outright military involvement. Nazism, truly, was taking on the shape of an unstoppable force. 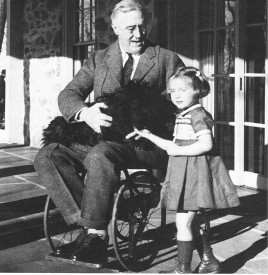 FDR in 1941. One of only a few pictures ever taken of him in a wheelchair.

We know the rest of the story: Churchill’s master plan of an alliance that would include a reluctant United States was helped along by Japan’s surprise attack on Pearl Harbor on December 7, 1941.  Congress declared war on Japan on December 8 and, three days later, on Germany and Italy.

What followed was a world war in Europe and the Pacific that left no region on earth untouched. Surely the most disastrous episode in recorded human history — for the number of military and civilian casualties and the scale of atrocities worldwide — it will also remain one of great moment, filled with ultimate implications.

It is arresting to dip beneath the surface of events, to let one’s eye come to rest on a dot on the map — Georgia — and on its outsized place in this grand story. A new chapter in this story is about to become better known: Churchill as artist, and his ties to our state.

An extraordinary exhibition of his art (and its story) that has already caught the eye of national media will take place at Atlanta’s Millennium Gate Museum, at Atlantic Station. There, “The Art of Diplomacy: Winston Churchill and the Pursuit of Painting” can be seen between October 3, 2014, and February 1, 2015. Visitors will learn more of the story behind the Churchill-Georgia connection and view more than 30 of his paintings, many of which have never before been viewed by the public. 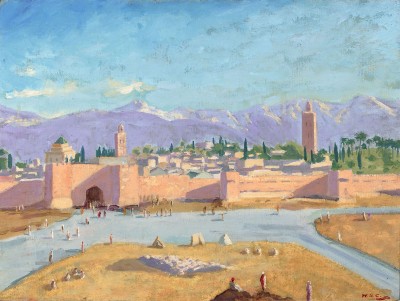 “The Tower of Katoubia Mosque” (1943) the only painting made by Winston Churchill during WWII. He painted this after he and FDR met in Marrakesh, and later gave it to FDR. Credit: Rau Antiques

Why did Churchill paint? Churchill himself tells us it was part of a therapy for keeping the “black dog” at bay, his name for the depressive bouts to which he was vulnerable. His own testimonials and those of the ones who knew him best evidence how serious that depression was at times. Through his art he subdued his foe and the forces of a greater Hitlerian darkness by an unrelenting courage and inspiration that seemed to draw a mystical strength from the artistic and creative process.

The story of Churchill and his art is inspiring in itself, but especially fascinating to me is its connection to the Georgia story of Warm Springs. There, in 1924, a polio-stricken Franklin D. Roosevelt came face to face with himself. Until he contracted the disease in 1921, Roosevelt was leading a charmed life: a graduate of Harvard, a carrier of the renowned Roosevelt name, and a confidant politician with expectations focused on the presidency. He fell from the heights to the depths when he lost his capacity to walk. How close he came to the emotional brink is hinted at in testimonies and letters. 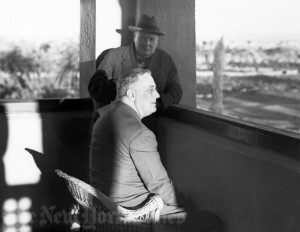 FDR looks out at the Atlas Mountains from the Koutoubia mosque in Marrakesh, Morocco, while Churchill studies his reaction, 1943. Credit: The New York Times

What we know is that his presence at the healing waters of Warm Springs initiated a most extraordinary transformation in the man, one in which he confronted his disability fully, turning it from enemy to ally as he found new ways of “standing” and becoming whole again. He liquidated his relatively modest family fortune and with the proceeds constructed the Roosevelt Warm Springs Institute as a water therapy clinic for polio victims. While no longer used for the same purpose today, the institute has been preserved and is open to the public, as is the “Little White House” that became his home away from home.

We know how this story ends, for Roosevelt, the United States, and the world. During World War II Roosevelt and Churchill became confidants, spending hours together talking, cajoling, strategizing, and plotting (and enjoying their cups!). And now we also know the taproot they shared: the disability, the deep wounds from which would also come enormous strengths.

In 1943 Roosevelt and Churchill met in Casablanca, Morocco to set the terms for the surrender of the Axis powers (Roosevelt was pushing for nothing less than “unconditional”). With the meeting ending uneasily and in less than full agreement, Churchill talked his friend into staying an extra day to view the famously beautiful sunset over the Atlas Mountains in Marrakesh. Only one with an artist’s reverence for the power of beauty could have placed such importance on so frivolous a side trip in the midst of war. 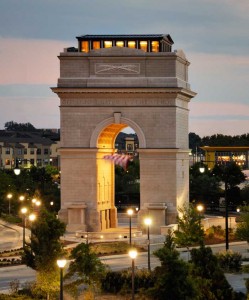 This month “The Art of Diplomacy: Winston Churchill and the Pursuit of Painting,” which features more than 30 of Churchill’s paintings, opens at the Millennium Gate Museum in Atlanta.

The next day, as FDR gazed out through an opening in a tower (he was carried up), a photographer captured his visage bathed in light; in the shadows, staring intensely at the president is the prime minister.

The very next day Churchill painted the view from the tower window, the only painting he made during the war, and later presented it to the president as a gift. The message is unmistakable: even in the darkest moments we can find the light of hope.

Both Churchill and Roosevelt experienced a disability in their lives: the option was to retreat in despair or to heal through the re-creation and strengthening of sense of self. Could either have been the kind of leaders they were without such struggle? Without these two men at the helm, is it possible that the war would have turned out differently?

We know that to be “whole” as a human being is to honestly confront all our parts. Both men did: Roosevelt, in learning what it truly means to “stand up,” and Churchill in holding on to his truest self through his art. Their intensely personal battles also became the sources of their strength. Their greatest test, and ours too, was the war that our two nations waged and that these two men led. Their victory — our victory — was also civilization’s.