Year after year, Videodrome won Creative Loafing’s top rating as the best video store in Atlanta. Its deep stock of movie titles was matched by the staff’s deep appreciation for film history and genres.

Then came online streaming and a recession that erased the competition—and the video store category from the Best of Atlanta competition. Now Videodrome is alone. 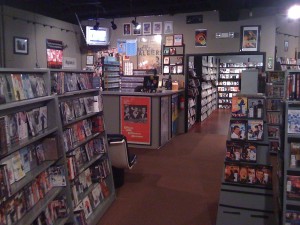 Videodrome, with its catalog of 18,000 DVDs, has kept on rolling after chain stores and other independent video rental services faded to black. Credit: Matthew Booth

Netflix, Amazon, Hulu and Redbox have not killed this video store at the corner of North and Highland Avenues, which continues to rent its 18,000 DVD titles to customers who want an experience not offered by the grocery store movie box and the online streaming service.

It’s both smaller (one store) and bigger (yes, 18,000 titles) than the competition, and has survived the Darwinian struggle for a niche in the entertainment world by being both broad and deep for its customers.

“It’s hard to watch movies nowadays,” said Matt Booth, owner of Videodrome. “You have to be a member of seven different (online streaming services) to get everything.” “We have everything,” Booth said.

Well, perhaps not everything, but there are thousands of movies that can’t be found in automated rental kiosks, aren’t all available on any streaming video service and otherwise can’t be obtained short of ordering them through the mail.

They include classics, foreign films, independent releases and obscure B-movie horror flicks. Videodrome has the blockbusters too. “Frankenhooker” can be found on the same shelves as “Noah.” It has Francois Truffaut’s “The 400 Blows.” as well as The Beatles “A Hard Days Night.” There is also the complete collection of the HBO series “The Wire,” and David Lynch’s television series “Twin Peaks.”

What you realize at Videodrome is how much you have probably been missing. The big-boxification of entertainment has squeezed out the cool obscure stuff. It also points out the self-limitations of Googling: How do you find what you don’t know that you might like? How do you look for something that you didn’t know was out there?

“Sometimes I don’t know what I want to see until I see it,’ said Videodrome customer Sara Maughan, 41. For her, the experience of browsing a brick and mortar video store with a good collection cannot be replicated online because a search engine demands you know what you’re looking for. She’d much prefer seeing, holding and reading video boxes to perusing an online video catalog when she picks out a movie. 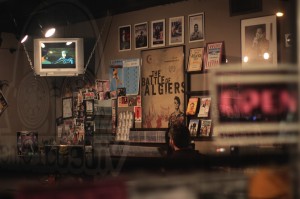 Videodrome is open noon to midnight every day of the week. Credit: Matthew Booth

Videodrome’s layout beckons you to search differently. “You couldn’t go to a Blockbuster and find movies categorized by directors or by genres,” customer Daniel Orson, 28, said. “It’s a good way to get into new directors you’ve never seen before.”

It helps when there are staffers who clearly know what they’re talking about.  The two videodrome employees I met seemed to possess a near encyclopedic knowledge of all things celluloid.

Some customers like Maughan rightfully worry about the viability of Videodrome. “I loved Movies Worth Seeing,” she said of the beloved Morningside film boutique store that closed in 2011 after 25 years. “Every time I come down North Avenue, I’m scared they’re (Videodrome) going to be closed.”

When Movies Worth Seeing closed, the AJC wrote that it “finally succumbed to the pressures of Netflix, rental kiosks and premium movie channels.”

“People have so many ways to get movies and TV shows,” owner Jerry Rubenstein told the newspaper. “We have a lot of customers, but they don’t come in as often.”

When Videodrome opened in 1998, there were two competing chain stores and an independent within two miles of it, Booth said. Now there’s nothing.

The Yellow Pages for Atlanta (the website, not the book—nobody has those anymore.) lists 30 businesses under the heading of “video rental store.” However, that lists includes the defunct Movies Worth Seeing, 16 video production services, and other businesses such as record stores and adult novelty stores, for whom renting and selling videos is only part of their business. The only store on this list that just rents videos, such as “The Firm,” instead of a knockoff with a similar title but a very different meaning, is Videodrome.

When Videodrome opened in 1998, there were three competitors within two miles of it. Now there’s nothing. Credit: Videodrome

Booth and others suggest that one reason the Internet hasn’t killed off Videodrome is that the digital revolution in home movies came on too fast and the result wasn’t what consumers expected.

“Netflix started out as a better deal than it ended up,” said Booth, pointing to the rise and stall of the national online streaming service.

“It wasn’t what we were promised,” Booth said. “It’s not really instant on demand with your fingertips. It’s dealing with a complex group of businesses who have all cordoned off their piece of the pie.”

Companies like Amazon and Netflix add and remove movies from their catalogs continually. Sometimes these monoliths’ actions alienate customers. Netflix, for example, hit a near-fatal snag in 2011 when it decided to raise prices and split its online streaming and DVD-by-mail rental services into two separate companies. The move resulted in a loss of 800,000 subscribers. The company reversed the decision and later rebounded.

Videodrome began to see an uptick in business that same year, according to Booth.

As we encounter the increasing glut of information dished out digitally in our daily lives, there are many easy ways to connect to entertainment that serves a mass audience. Finding something more unique is much harder. This is when you need a trusted filter or curator—someone or some place that is consistent and reliable.

That’s why Videodrome does more than survive; it stands out. In 2013, Creative Loafing established a “Trophy Case” highlighting 16 individuals, institutions and businesses in Atlanta that had no equal.