Dignitaries at the ribbon-cutting ceremony for the new Rodney Cook Sr. Park in Vine City (Photo by Kelly Jordan)

By Ben Abrams and Maria Saporta

After a devastating flood ravaged Vine City in 2002, neighborhood residents gathered with more than 100 dignitaries and guests to celebrate the opening of the new Rodney Cook Sr. Park in Vine City on Wednesday.

Spectators were packed into an overflowing tent as Atlanta Mayor Keisha Lance-Bottoms welcomed them to Cook Park as part of a ribbon-cutting ceremony that celebrated the unique history of Vine City. 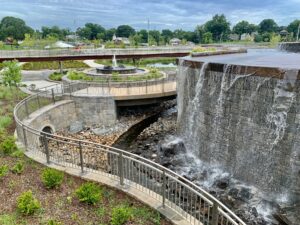 Former Atlanta Mayor Andrew Young remembered when it “was an expensive neighborhood,” and his family couldn’t afford to live there in the 1960s. Young recounted the story of the Peyton Wall that the city erected to separate white and Black communities. Two council members voted against the wall, and one of those was Rodney Cook Sr., the park’s namesake.

“Twelve years after that, someone pushed me into running for Congress,” Young said. “I ended up running against him.”

The congressional district was only about 38 percent Black at the time, which should have favored Cook Sr., who was white.

“I wasn’t supposed to win,” Young said. “We never had debates. We had discussions. We just got along. On election day, it poured down rain. I just knew I didn’t stand a chance. (But) there was a 74 percent turnout of Black voters. He was very gracious, and we became friends.”

And that’s the legacy of Cook Park.

“This park represents a heritage of peace and reconciliation,” Young said. “We sort of conceived this as a peace park – a place where we can be at peace together.”

The idea for Cook Park dates back to 2010 when Park Pride developed a parks master plan for Vine City and English Avenue. The idea was to create a green space that could also serve as a stormwater retention pond designed as a lake feature for a new park. 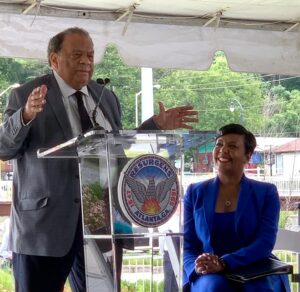 The goal was to reduce the likelihood that the community would experience another major flood like the one in 2002, which destroyed more than 60 homes, according to Bishop John H. Lewis III, chairman of the Vine City Civic Association.

“This is sacred space,” Lewis said. “Today is a true testimony of…what happens when people come together. The community has taken ownership of this park.”

Lewis pledged that Vine City Ambassadors would be in the park every day with community gatherings, including outdoor classes.

Cook Park, a 16-acre space, cost nearly $40 million. The City of Atlanta’s Department of Watershed invested about $25 million to create the stormwater retention lake. And the Trust for Public Land raised $14 million from about 75 private donors, including $500,000 from its board.

The Trust for Public Land took over the design and development of Cook Park, presenting the final design in 2017.

“The biggest thing I feel actually is joy, that this community now has this park,” said Dusenbury. “We’ve taken this land that was made vacant and made a blight by flooding and turned it into this tremendous park that is eliminating flooding for thousands of residents.” 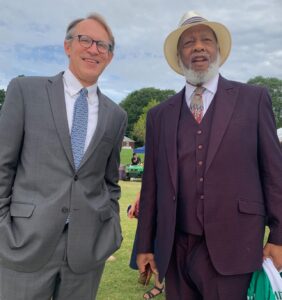 John Dargle, the City of Atlanta’s parks commissioner, described Cook Park as a place that turned tragedy into triumph.

And the community already has embraced the public space.

John Ahmann, president of the Westside Future Fund who lives two blocks away, said that as soon as the fences came down in the past couple of weeks, the park has been full of people playing basketball, children enjoying the splash pond and community gatherings.

“It’s been great to see the park become fully activated by the community,” Ahmann said. “It’s bringing an amenity to what was vacant, unused land. It’s a high-quality park.”

“It was worth the wait,” Halicki said. “The park is spectacular.”

Note to readers: Mayor Keisha Lance Bottoms, during her tenure as a city councilwoman, mayoral candidate and mayor, has often complained that her Neighborhood Planning Unit –NPU-Q, was the only NPU in the city without a public park.

“We now have a park in my neighborhood,” Bottoms said at the ribbon-cutting Wednesday.

The city recently acquired land on Danforth Road in southwest Atlanta that it will develop as a park.

The following images and video were taken by Ben Abrams. 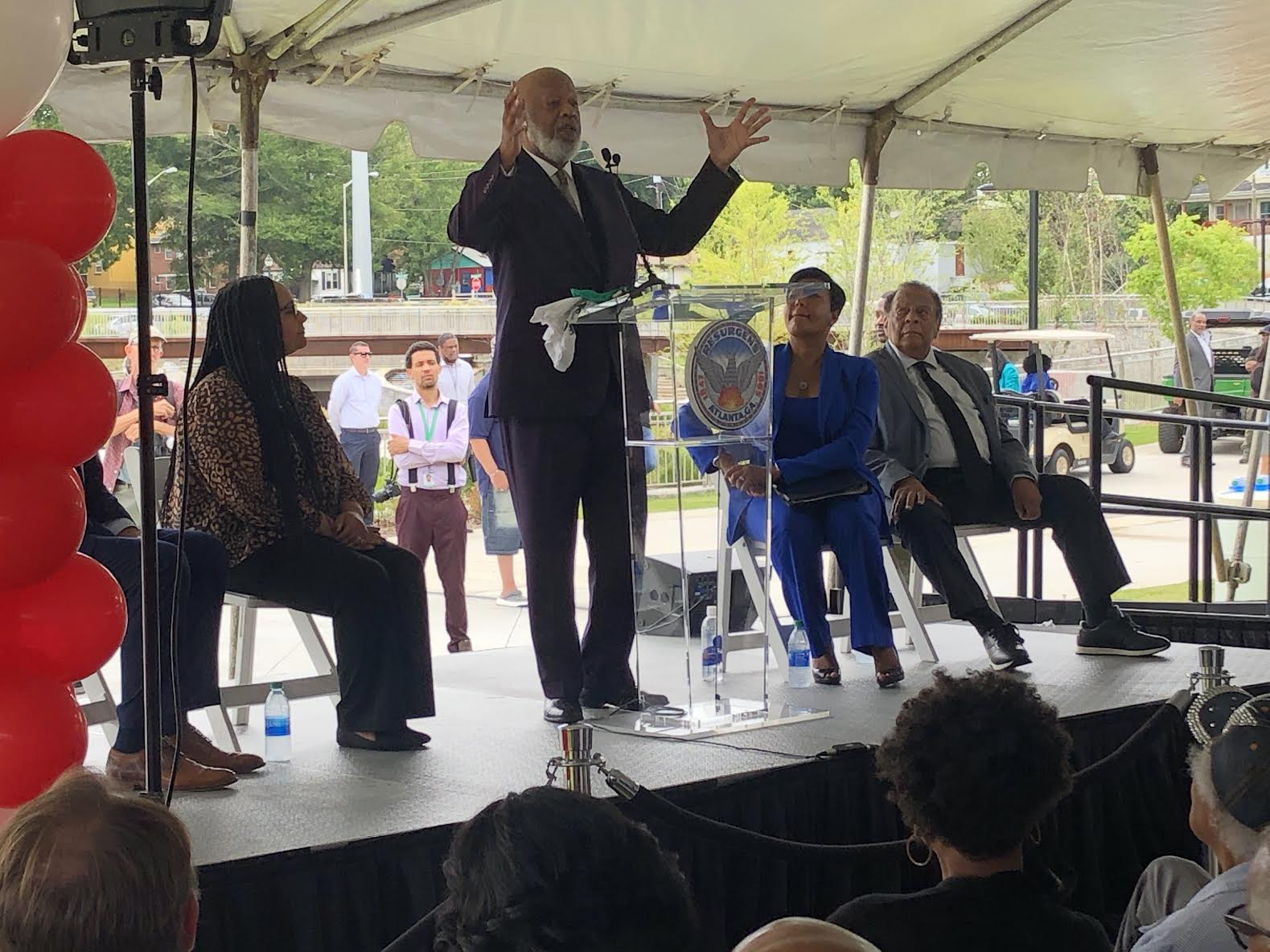 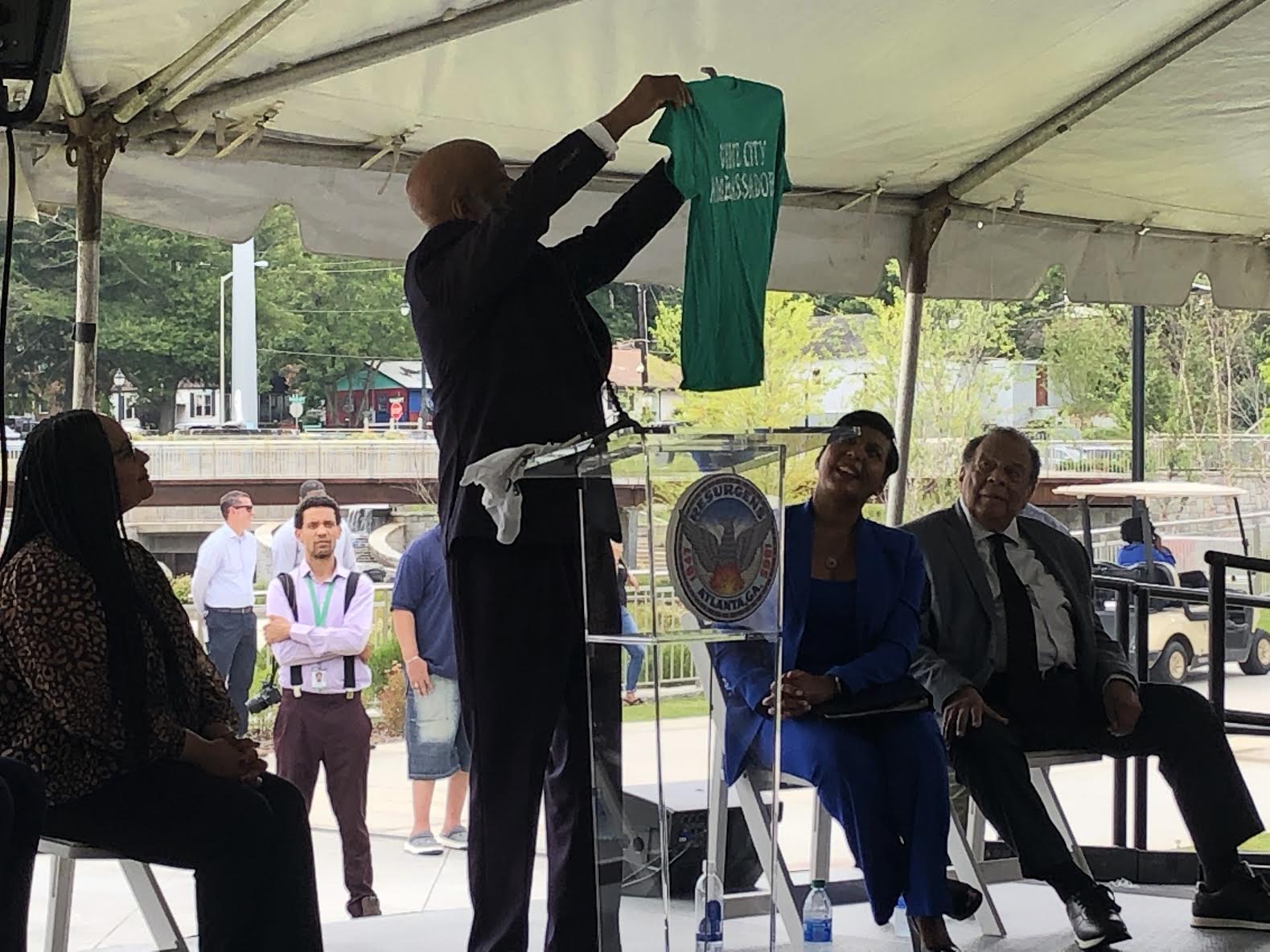 Bishop John H Lewis III holding up the “Vine City Ambassadors” shirt as he pledges that the ambassadors will be in the park everyday with community activities. 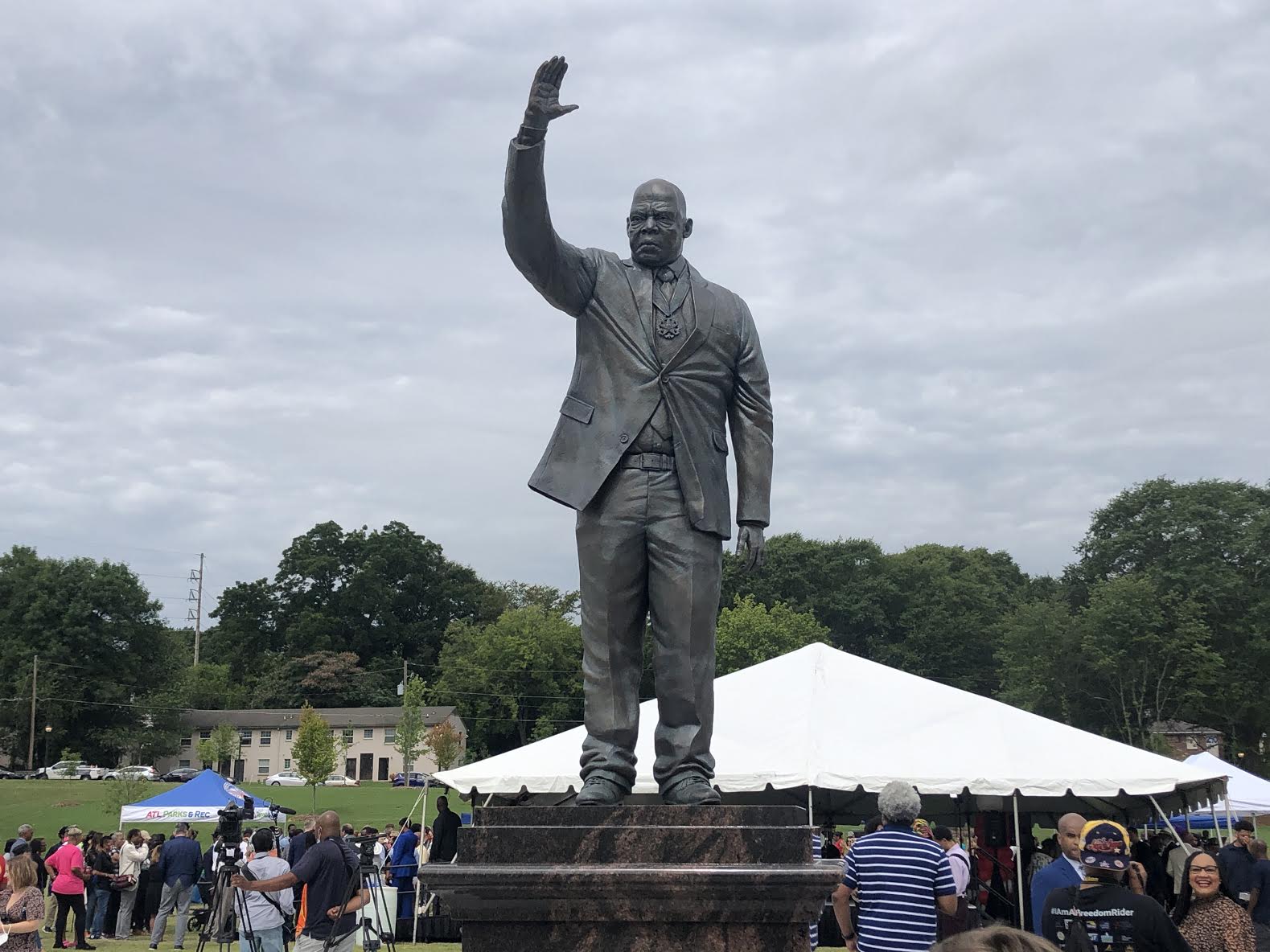 The statue of the late US Congressman and civil rights leader John Lewis overlooking the newly opened cook park. 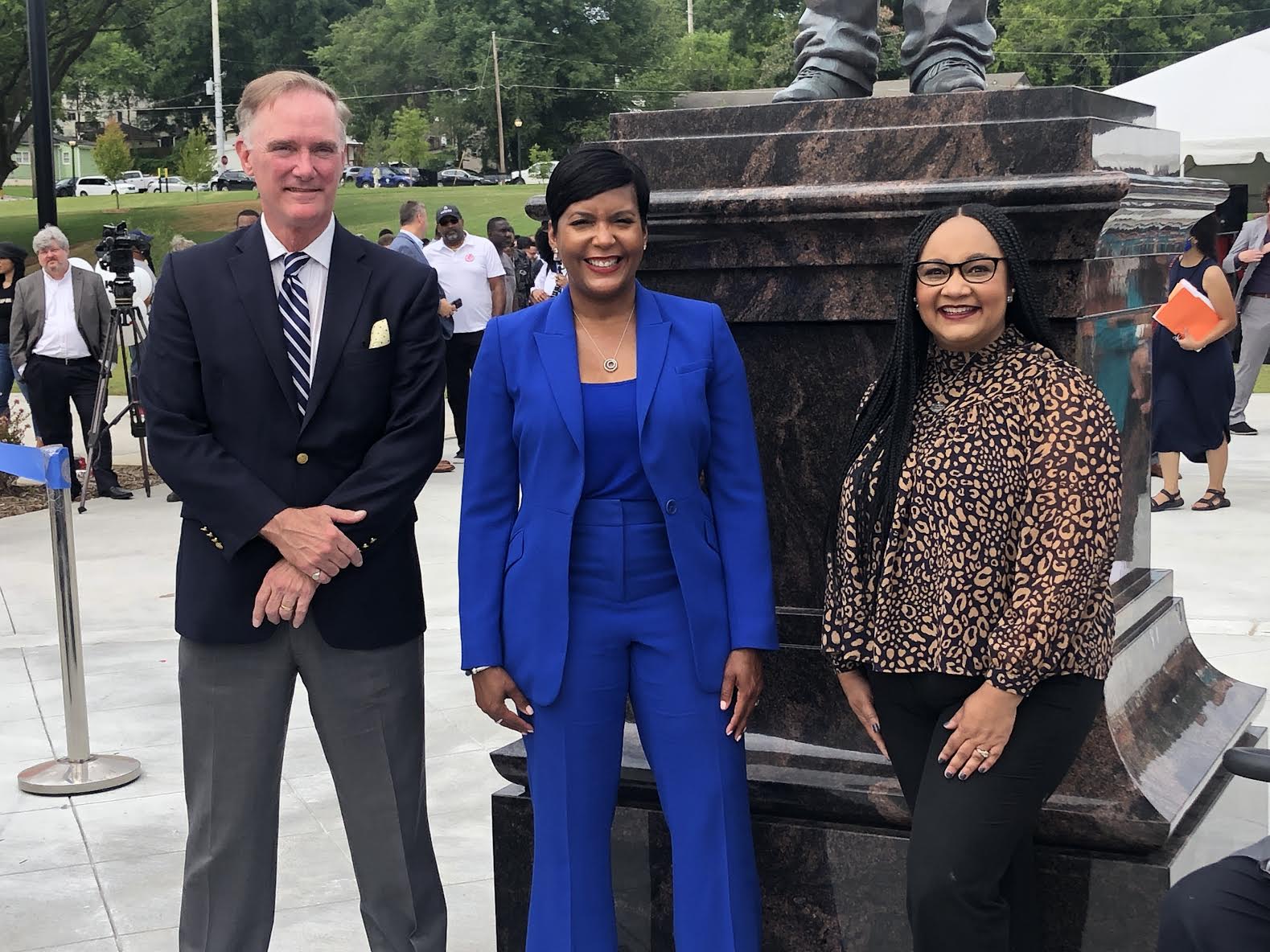 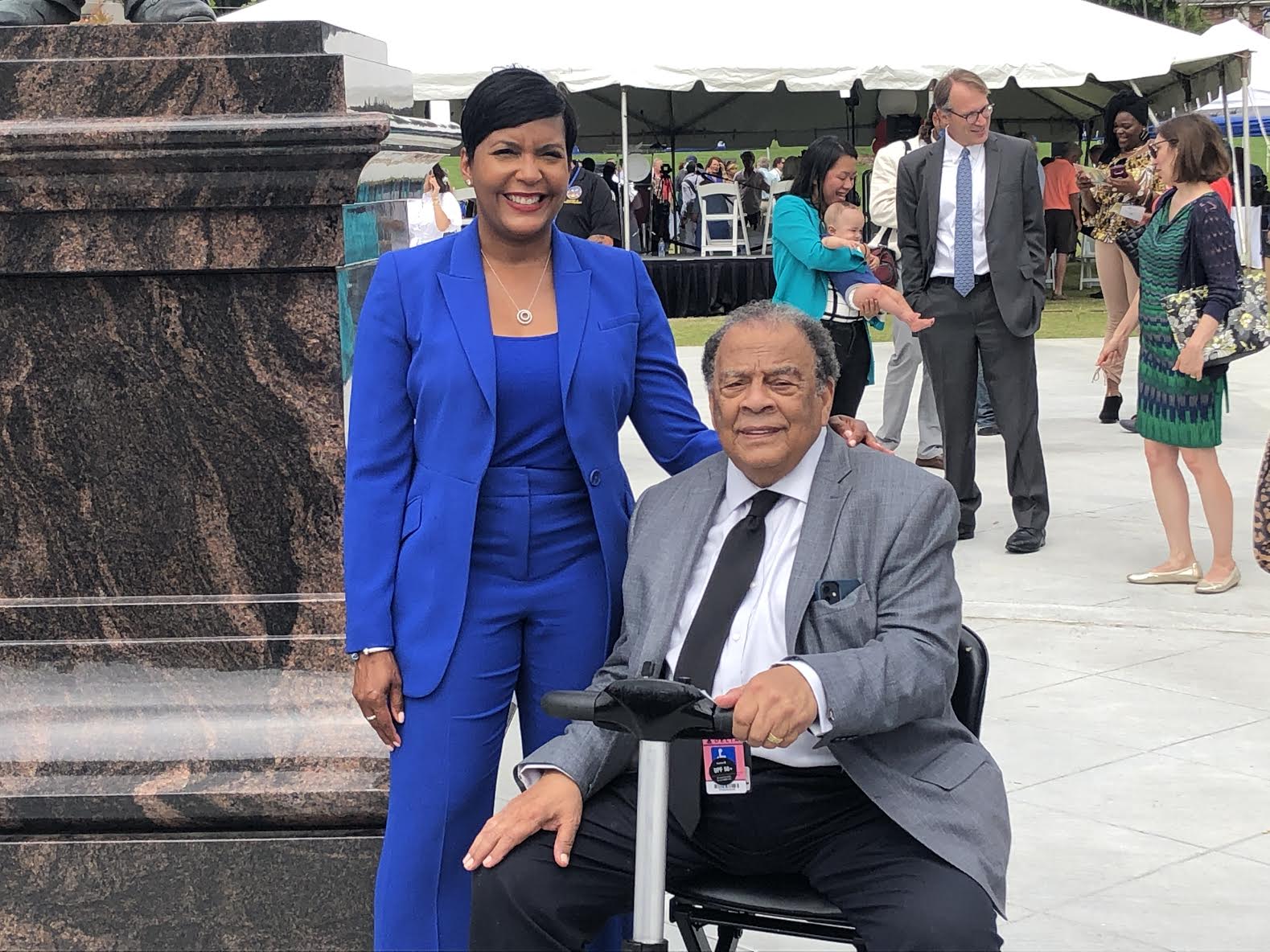