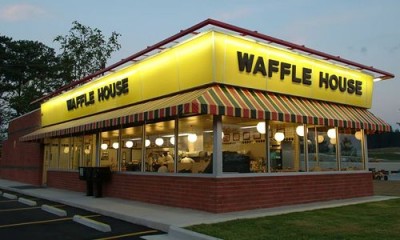 Neighbors Joe Rogers and Tom Forkner opened the first Waffle House in Avondale Estates, in DeKalb County, in 1955. Open 24 hours a day, 7 days a week, the restaurant featured its namesake — of course, the waffle — as well as eggs, grits, hashbrowns (a specialty), burgers, and T-bone steak. Initially restricted to the Deep South, Waffle House today operates in 25 states and is America’s second-largest family-style restaurant (after Denny’s). With its “retro-style dining room where customers can watch their food being prepared,” writes journalist Chris Starr, “the look and quality of the restaurant has never really changed.” 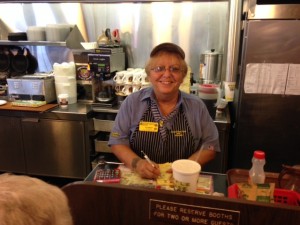 That’s the official story from the New Georgia Encyclopedia. The unofficial story is the one every regular customer knows in his or her own way, which is why that yellow sign is a southern icon.

During my twenty years living in Washington, D.C., before moving to Georgia, surely I encountered a Waffle House somewhere in my travels.  But the memory of my first encounter after moving to Atlanta in 1997 remains vivid. It was a beautiful autumn day, a late Sunday morning. I stopped with my wife and two young children at “#786,” the Chamblee Waffle House on Peachtree Industrial Boulevard and Clairmont, just ten minutes from where we lived. (Every Waffle House has its own corporate number.)

It was filled with an after-church crowd. The jukebox was playing. At the grill was a man I later learned was called “Big Mike”; our faces would become familiar to each other as we exchanged nods over the Sunday mornings to come. And waiting on us that day was Elizabeth, someone whose face has also grown familiar to me. And there was Rhonda, too, our cashier. All three are still there these many years later.

One Sunday I noticed there was something different: who were those grown kids behind the counter? And then it hit me. That must be Rhonda’s daughter — looks just like her, with the same red hair (meet Candy). And Big Mike’s daughter — she has his cheeks and eyes, and the same earnest and friendly intensity (meet Tiffany). Well, what do you know: there were Waffle House families on both sides of the counter that day. 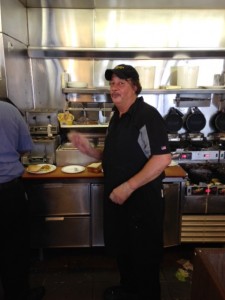 After 17 years, #786 is like the seasons to me. If the clatter and routine inside is a familiar constant, the memories flicker like the scenes through a window, changing with the time of the year. There’s a reason it’s called “House” — this is not just a restaurant.

Oddly, the Chamblee House calls to my mind life on a submarine: crowded, dense quarters; assigned tasks; and a verbal code between the crew of cooks and servers that I still can’t quite understand. Everyone seems to know exactly what to do and when to do it (without looking!). Just beyond the doors of this little brick and glass haven is the world, pressing in on the walls like an ocean. All’s well inside.

I ask my son why we like this place so much. He says it’s because of the culture. I think I know what he means.

The great Georgia painter Lamar Dodd once remarked that he painted to capture “the truth in things.” I wonder if that is what makes Waffle House #786 so comfortable, and why we go back — that it captures a certain truth about ourselves together.

On this morning at our time-cherished spot, I chat with my son about all manner of things, finish off my morning cup, and stand. It’s a busy day here: there’s a line waiting for our table. Making my way to the register, paying my bill, and saying goodbye to Elizabeth at the cash register and Big Mike at the grill, I’m ready to head through the door into the world outside.