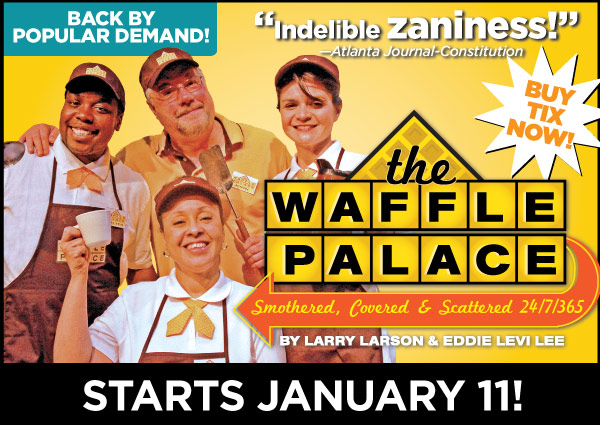 As a transplanted Northerner, I misunderstood Waffle House for many years. Wasn’t it just a kitschy Southern chain of roadside dives, frequented by truckers, cheapskates and all-night partiers? 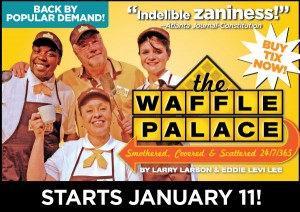 “The Waffle Palace” at the Horizon Theatre is based on true stories from the Atlanta-based Waffle House.

So wrong. Way too many stories, families and milestones stack up at the Waffle House against that easy bias. The restaurant’s 24/7/365 reliability across a network of locations has been going so strong for so long (since 1955) that American culture – not just Atlanta’s — is scattered and covered with Waffle House stories.

Locally, the Waffle House mystique is celebrated on stage with last week’s return of the home-cooked play, “The Waffle Palace: Smothered, Covered & Scattered 24/7/365,” at the Horizon Theatre.

The play’s cast and writers met up with restaurant fans and regulars last weekend at the Waffle House Museum in Avondale Estates. The line between real waffle memories and made-up waffle drama melted like butter on a hot griddle.

The play dips into the same batter (or is that banter?) that draws diners to Waffle House – its characters and their life events. This is what newcomers don’t understand about “WaHo.” The chain’s numerous locations and reliable menu have created a familiar stage for family traditions and indelible memories. Of course, one of those traditions is simply eating. 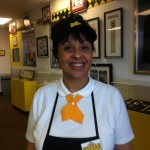 “One couple told me when they bought a new home, they weren’t worried about what its kitchen looked like, only its proximity to Waffle House, because that’s where they ate breakfast every day,” said Marguerite Hannah, who plays a Waffle House waitress in “Palace.”

At the conclusion of every performance – and this is the play’s second run — audience members are invited into the Waffle Palace set. People bend Hannah’s ear, just like a real waitress. They all have real stories about the Waffle House.

“What I’ve heard is phenomenal,” Hannah said. “Every race, every economic background. They wear the hats, and they bring their favorite waitresses, who wear their nametags. It’s kind of a cult.”

Native Atlantan Kathleen Poe Ross is a Waffle House regular who dropped by the museum open house. Her extensive collection of WaHo-bilia includes a slightly warped 45 vinyl featuring “I like what I see at the Waffle House,” and the flip side, ”There’s 844,739 ways to eat a hamburger at Waffle House.” 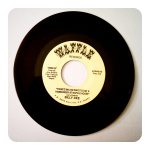 Her connection to Waffle House paralleled her religious passage to adulthood. As part of her confirmation class, she ordered a grilled cheese for lunch with an adult mentor from her church. (“I wasn’t into the hash browns then,” she recalled; today she always orders them scattered, covered and chunked with cheese and ham. “I don’t know what I was thinking!”)

The set menu and footprint has always created a stage that was authentic, no-frills and Southern — down to the grits, sweet tea and getting called “honey.”

“The people at the Waffle House are the wild card,” she said. “The play makes a lot of sense to me, because it’s a place ripe for comedy, heartwarming stories and drama – you’ve got the whole range.”

Over time, her personal traditions evolved:  the vanilla Cokes, playing the WaHo jukebox (with its corny 45s) with high school friends at any hour, Christmas Eve with her sister at Waffle House, Valentine’s with her husband Jon.

In 2010, their wedding swag included black and yellow drink koozies and coupons for free waffles. “I didn’t think it was possible for me to love Waffle House any more than I already do, but they really went above and beyond with this,” she wrote on her wedding blog.

As Atlanta boomed, local devotion to Waffle House may have intensified. As commutes lengthened and cul-de-sacs cut off neighbors, the chain remained an unwavering beacon of community. As the city became a stage for reality shows that aren’t, here’s a place that  still keeps it real. 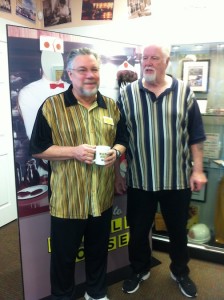 The writers of “Waffle Palace” mined the strong local loyalty for their drama. Their play turns on a compelling conflict: what if the place that you thought would never change, a place where anyone could go and not be judged, suddenly became threatened?

“Because Waffle House is a family place, there’s more at stake,” said Larry Larson, who wrote the play along with Eddie Levi Lee and has also acted in it.

“One article called Waffle House a ‘weirdness magnet,’” Lee added. “We recognized that at Waffle House, everyone has a story, and with ‘Waffle Palace,’ we’re tapping into a cultural affinity.”

Waffle House recognized the personal imprint of its brand last year when it named Pat Warner the Director of Culture. The chain’s yellow and black website welcomes photos and stories from regulars. There are also the twafflers (look for tags such as #[email protected])

“Joe Rogers Sr. always said we’re not in the food business, we’re in the people business,” Warner said. “Food is just a currency. People come here for their life moments, and that creates the bond.”

Today the round Waffle House waffle reminds me of a map of Atlanta, with roads bisecting the perimeter and creating intricate pockets and bumps. It never closes, memories are always on the menu, and the crew inside makes a constant effort to preserve a consistent, authentic experience.

A Waffle House stands for remembering, and that’s worth praising. 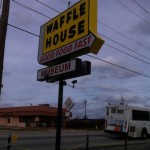 “They can be frying six eggs, four pieces of bacon and have two waffles in the iron at the same time and listen to three waitresses yelling out orders and it all registers and they rarely get an order wrong.

“There ought to be a lot of ex-Waffle House cooks in Congress. Maybe they wouldn’t forget what the voters elected them to do.”