Samuel McKittrick hunkered down as neighbors fought each other to the death, hoping to survive, return home and resume the simple pleasures of Southern life. At 40, he was supposed to be retired, but a bureaucratic snafu kept him on duty.

“We are getting plenty of bacon and cornbread, occasionally a mess of good old Rio Coffee and sugar and a mess of beef once and a while,” McKittrick reported in what today would be a quick Instagram post. But in 1864, only ink and paper were available as the duty-bound Confederate Army captain wrote his wife Mary Ann back in South Carolina.

“I wish I could be home eating vegetables with you,” he told her.

Only 23 days later, he was shot and killed in the Battle of Atlanta, 149 years ago  last week. McKittrick’s log of Civil War food and devotion to his wife lived on through his letters, some of which were read at “Cornbread Through the Ages,” one of 50 anniversary programs marking the battle anniversary last week. 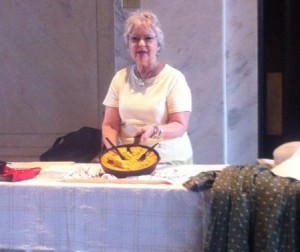 Millie Coleman at “Cornbread through the Ages.”

Two big skillets and a microphone

More importantly, the letters were read by his great-great-granddaughter Millie Huff Coleman, a dietary anthropologist and lifelong Atlantan who put on a period costume for part of her talk. The letters’ bittersweetness came with a savory taste for the audience members at the DeKalb History Center who sampled from Coleman’s two skillets of cornbread made in the style of different historical eras.

One was a more modern recipe from Atlanta’s long closed Frances Virginia Tea Room and known as eggbread. The more familiar gritty taste came from her grandmother’s skillet full of corn meal, buttermilk and baking soda.

“I think this is pretty authentic,” said Coleman. “We had to use a good bit of buttermilk to make it rise with the soda.”

Cornbread and letters connected McKittrick’s separate worlds of home and combat.  From the battlefront near Marietta, he expressed his fears and expectations that he was going to die, instructions on the upkeep of the farm as well as a belief in the afterlife.

“We may be attacked today. If so I trust God in his providence will shield our heads and give us victory,” he wrote as Union General William T. Sherman’s troops advanced toward Atlanta. “Our troops are so worn down by fatigue and hardships that many of us care but little how soon they come as we have them to fight somewhere and perhaps as well here as anywhere else.”

“Oh if I could be allowed to visit you … But this privilege is denied me and I am trying to get along as well as I can by only enjoying sweet meditation of you. Let us live that so that if we never meet on earth we may make a happy reunion in Heaven.”

Cornbread from that era also told another Coleman family story that mirrored Atlanta’s past and development. The sparseness of Civil War-era recipes likely is a reflection of the scarcity of the times. For example, they left out eggs, which were outrageously expensive during the war — as high as $44 for a dozen because of their scarcity, Coleman said. They couldn’t use active baking powder because it wasn’t invented until 1880. 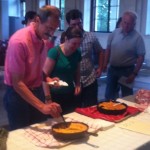 As American society regrouped after the Civil War, cornbread began to appear in more refined versions. Coleman, who describes herself as an author, food editor and “herstorian of tea time traditions and Civil War life,” said that in the 20th century women were for the first time able to enter an eating establishment without being escorted by a man.

Cornbread turned a tad more gourmet for these pioneers, in large part because of the wider availability of certain extra ingredients. Enter eggbread, which included flour, egg and baking powder for a lighter, more delicate flavor that the Confederate troops might not have recognized.

The Frances Virginia Tea Room, at the corner of Peachtree and Ellis Streets, was at the center of Atlanta’s entertainment district. Coleman said the establishment served as many as 2,000 customers a day.

“Elvis premiered at the Paramount right next to the Tea Room. ‘Gone with the Wind’ played two theaters down from there,” Coleman said. “In the 1930s it was like Times Square for Atlanta.”

Tea rooms eventually died out when ordinances were changed to allow women to go into regular restaurants without an escort. The Frances Virginia Tea Room closed in 1962; Coleman’s aunt was a partner and a dietitian for the eatery.

One generation’s loss is another’s gain. McKittrick was never paid for his service in the Confederate Army, but his letters helped inspire Coleman’s love of history and  writing. She is the author of  “The South’s Legendary Frances Virginia Tea Room Cookbook.”

She signed paperback and hardback copies for several audience members whose appetites were whetted for more cornbread stories, then and now.