Warren Buffett: ‘I wouldn’t think of selling a share’ of Coca-Cola stock

The 2013 Coca-Cola Co. annual meeting began more like a fireside chat between CEO Muhtar Kent and the legendary Warren Buffett, CEO of Berkshire Hathaway, the largest shareholder of the soft drink company.

For most shareholders attending the annual meeting at the Cobb Galleria Centre, Buffett’s presence was a pleasant surprise. Buffett had served on Coca-Cola’s board for 17 years; and his son, Howard Buffett, has been a director since 2010.

As Buffett walked on stage, the crowd of 850 shareholders and guests gave him a warm welcome.

“When you’re 82, they clap when you sit down because they’re not sure you’re going to get up,” Buffett said.

Kent had Buffett tell the story of how he first went into the Coca-Cola business when he was 7 years old in Omaha. He would buy a six-pack of Coke for 25 cents from and sell each bottle to his friends for a nickel.

Buffett has been an enthusiastic investor in the company for decades. 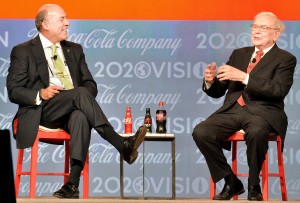 “We’ve never sold a share of Coca-Cola stock, and I wouldn’t think of selling a share,” Buffett said. “I like wonderful brands if you take care of them.”

He asked Buffett to give examples.

“I like to study failure,” Buffett said of enterprises. “The biggest thing that kills them is complacency. You always want to be on the move. When you’ve got a great business like Coca-Cola, the danger would always be that you would rest on your laurels. I see none of that at Coca-Cola. Tomorrow is more exciting than today.”

Kent asked Buffett about the economic and political challenges facing the United States.

“We always have problems,” Buffett said. “The luckiest person is someone being born in the United States today.”

He went on to say that the quality of opportunities, the nation’s laws and the economic climate have “produced an abundance that you can’t believe.”

Kent then asked Buffett, who in his senior years has been investing much of his fortunes in philanthropy, about the transfer of wealth around the world and the shifting of economic wealth. What advice would he give a company like Coca-Cola?

“You have to accepted in countries around the world and focus on something that’s going to make their lives better,” Buffett said.

Kent followed up and asked whether the company’s commitment to sustainability — to renewable energy and water conservation and quality — were the right way to go.

“We have only got one planet,” Buffett said. “We are sitting in the shade of trees that other people planted. It’s obligatory that we plant a few trees ourselves. It’s the right thing to do, and it’s good business.”

Kent then asked Buffett to talk about his early friendship with Don Keough, the retired president of the Coca-Cola Co., who stepped down from the board at Wednesday’s annual meeting. Buffett wrote the preface to Keough’s book: “Ten Commandments of Business Failure.”

Buffett said that Keough’s greatest quality is his ability to connect with people of all generations.

Kent then quoted from Buffett’s preface in Keough’s book: “If you wanted to invent a human personification of Coca-Cola, it is Don Keough.”

Then Kent asked Buffett is the goal to double Coca-Cola’s revenues by 2020 was a sound one.

Then Buffett shared some of his views of business.

“No business ever failed with happy customers,” Buffett said. “You are selling happiness.”

The last question that Kent asked Buffett was whether there was a chance of reforms being able to pass through the U.S. Congress.

The crowd then gave Buffett a standing ovation.

Inventor Dean Kamen then unveiled the EkoCenter — a partnership with Coca-Cola to help develop small community centers that provide clean water, electricity, communications to some of the most impoverished corners of the world.

Even though the annual meeting attracted many of the regular critics who take the company to task every year for a myriad of issues, after the presentations of Buffett and Kamen, the negative fervor was more subdued.