Washington in the time of Trump 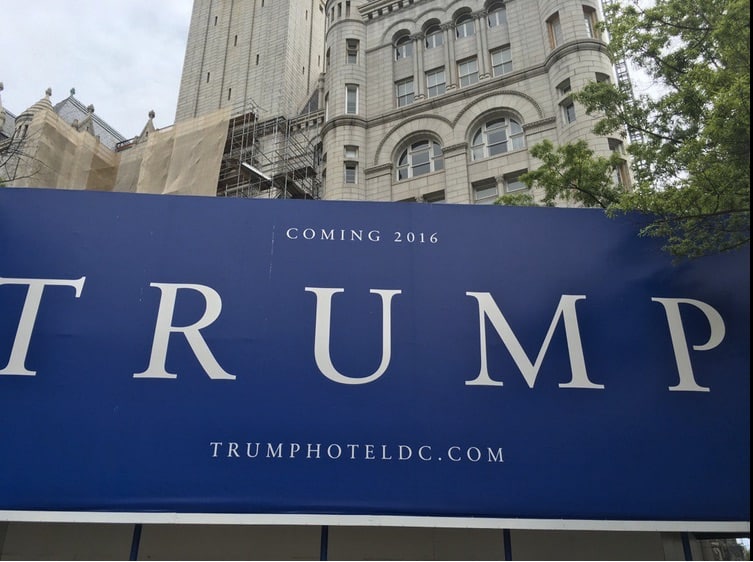 WASHINGTON — Donald J. Trump is going to be a big presence on Pennsylvania Avenue next January, whether he puts his hand on a Bible or not.

Eleven blocks down the street from the steps where the next president will be sworn in, the landmark Old Post Office Pavilion, also known as the Nancy Hanks Center, is being remade into the Trump International Hotel.  Set to open in September — “dramatically ahead of schedule” — the five-star hotel hasn’t announced the rates for its inauguration packages yet, but they’ll notify the interested by email when they do.

In many ways, Trump’s prominent spot on the inaugural parade route is entirely fitting. As much as he has railed against the city as the epicenter of the nation’s ills, Washington over the past decade or so has become the Donald’s kind of town.

It’s an odd paradox that in a time of increasing economic desperation for so many Americans, several of the urban centers which were viewed as our most pressing problems a few decades ago have blossomed. This is true of St. Louis and Brooklyn, but nowhere is the paradox more striking than in Washington.

Where once people were afraid to park their cars, there now are bed and breakfasts. The number of federal employees and reporters covering them has declined dramatically over the past quarter century, but the workforce, swollen by the growth of associations, foundations, LLCs and banks, is much larger.

Washington looks both younger and richer than it did a few years ago. There are fewer people who could be said, except in the most exaggerated sense, to work for you.

The money has come with the development of successful downtown facilities like the Verizon Center in Washington and Busch Stadium in St. Louis. But these urban success stories also point toward the nation’s growing economic stratification.

The problem poor of Washington and other cities have not climbed the ladder, by and large, so much as they have been squeezed farther out into suburbia. These urban rims are where much of the racial friction which has spilled over into this presidential campaign is taking place.
It has been Trump’s special talent as a politician to marry the gold-plated aura of the revitalized city centers with the seething resentments of those on the periphery who feel themselves losing ground. Sheer audacity has been key to this combination, but over the past couple of weeks Trump’s behavior has come to seem progressively less cunning and increasingly fevered.

Crazy, actually, is the word that would be used in most circumstances when a defendant in a multi-million-dollar case openly excoriates and implicitly threatens a federal judge. Put this together with his unnecessary challenge to New Mexico Gov. Susana Martinez, his testy press conference over his donations to veterans groups and his sputtering response to Hillary Clinton’s attack on his qualifications to be commander in chief, and there is a sense of something, somewhere, coming unglued.

Clinton took off a day or so to woodshed her big speech. You have to figure that some version of it has been sitting at the ready for a while, and could have been waiting longer. It had the feel of a post-nomination, general election speech, and that’s generally how it was received.

But the fact that Bernie Sanders was trailing Clinton by only a couple of points in Tuesday’s California Democratic primary can’t have been lost on the Clinton strategists who decided to fire this major bullet a little earlier than expected. Comparing the calculation and finesse shown by that choice with the red-flag approach of the Trump campaign, this looks less like a real contest by the day. But it’s early yet.

Any readers longing for a good political book to accompany the conventions this summer might want to go a little far afield and pick up James Shapiro’s “The Year of Lear: Shakespeare in 1606.” In vivid detail, Shapiro demonstrates how Shakespeare, an aging playwright in the service of a new king, borrowed directly from the political and religious turmoil of his day to fashion “King Lear,” “Macbeth” and “Anthony and Cleopatra.”