We need to preserve our historic treasures on Peachtree Street 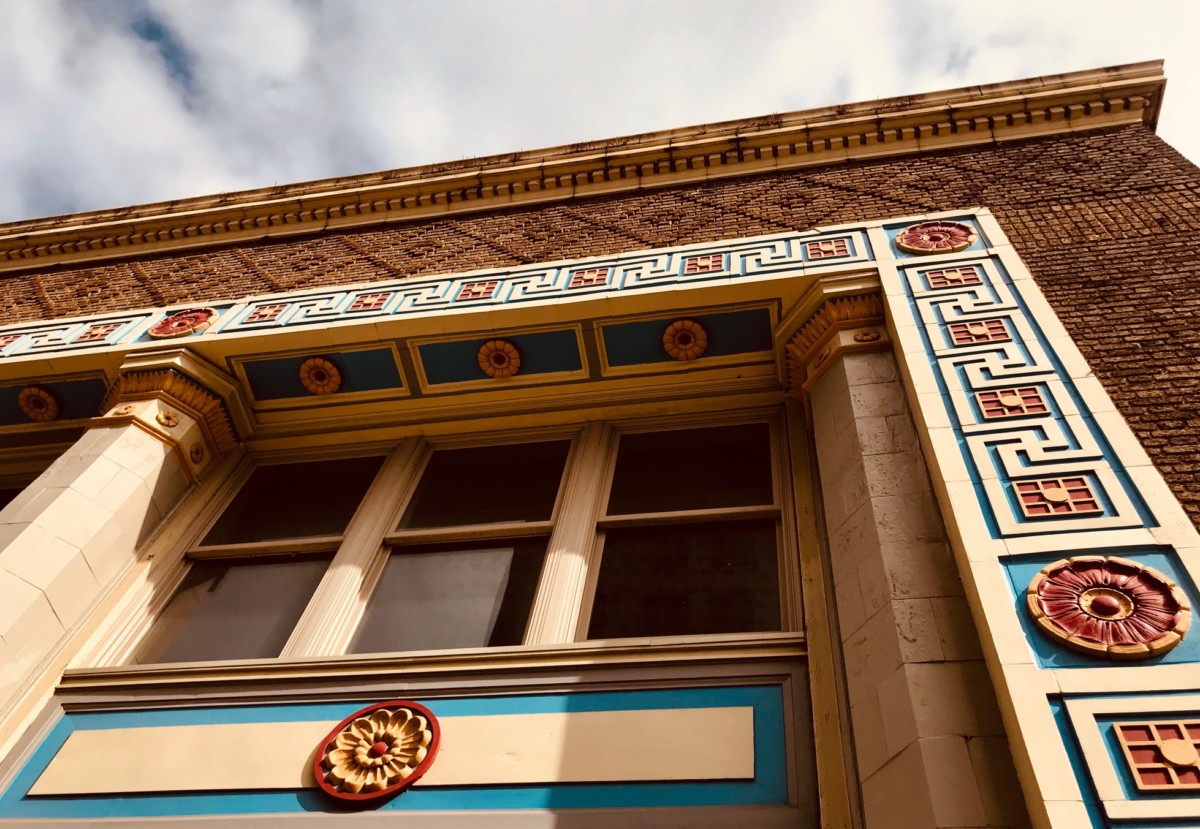 Be on the lookout.

Several historic buildings along Peachtree in downtown and Midtown are in jeopardy – facing an uncertain future as development encroaches on Atlanta’s most famous street. 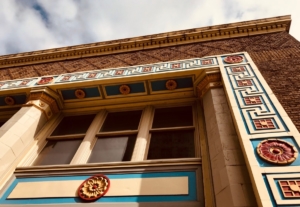 Most recently, the building served as the home base of the Metro Atlanta Task Force for the Homeless. The shelter, which had been acquired by the downtown business group Central Atlanta Progress, closed its doors in August 2017.

In December, CAP sold Peachtree-Pine to Emory University. The building is across the street from the Emory-Midtown hospital (formerly Crawford Long Hospital). Emory has not yet decided whether it will renovate the building or tear it down.

“A lot of this remains to be seen,” Robin Morey, Emory’s vice president and chief planning officer, told the Atlanta Business Chronicle. “We are going to start a conditions assessment on the property to determine the mechanical, electrical and structural capacity.

“If there are opportunities to preserve it, we plan on doing that,” Morey said. “It has to fit in with the programming of the site and really what the site can bear… But any development we embark on will honor and respect the past of what that site has meant to Atlanta.”

Peachtree-Pine actually is three different buildings – expansions that took place over time. The most historic building was built nearly 100 years ago as one of Atlanta’s first automobile dealerships. 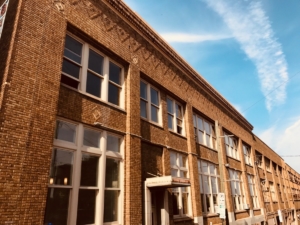 The Pine Street view of the Peachtree-Pine building, which shows the different expansions (Photo by Kelly Jordan)

In the fall of 2000, the Atlanta Historical Society wrote an article about the early days of the city’s “Automobile Row” – auto-related businesses concentrated near the 400 block of Peachtree Street.

“Noted architect A. Ten Eyck Brown’s United Motors Service Building (c. 1920-21) is one of several survivors of this early automobile district,” the Journal stated. “Its decorative banding adds a bright note of color to the otherwise ordered and restrained classicism of the building, and it looks forward to the polychromatic patterns of Art Deco, the premier style of the Twenties.”

Mark McDonald, president and CEO of the Georgia Trust for Historic Preservation, called it one of his “favorite buildings on Peachtree” and in Atlanta.

“It’s a magnificent Egyptian revival – art deco design that needs to be preserved. It’s of statewide significance,” McDonald said. “The artistry is top-notched with its façade. It’s very related to the early automobile age.”

Despite its role in Atlanta history and its architectural significance, the Peachtree-Pine building does not have “Landmark Status” from the city of Atlanta and the Atlanta Urban Design Commission. If that were rectified, it could help Emory decide in favor of preserving the building. 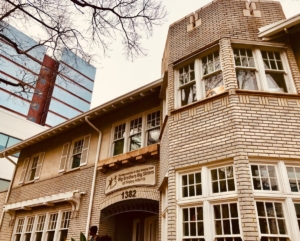 Another building without “Landmark Status” is the current headquarters of Big Brothers Big Sisters of Metro Atlanta – one of the few remaining historic mansions on Peachtree Street.

The nonprofit announced on Jan. 11 that it is putting up its headquarters – at 1382 Peachtree –for sale. Midtown’s hot real estate market has made it an opportune time to sell the building, which includes the Peachtree-facing historic residence built around 1902. The architectural firm of Perkins + Will built out the adjacent expansion a couple of decades ago.

Kwame Johnson, CEO of Big Brothers Big Sisters, said the future owner of the property, which totals .6 of an acre, will decide whether to redevelop the site or incorporate the historic residence as part of a future development. 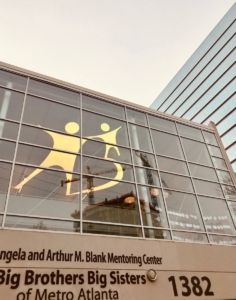 “That’s one of the last three or four historic residences remaining on Peachtree,” McDonald said. “That’s a very valuable building.”

The other historic residences are Rhodes Hall, where the Georgia Trust is based; the Atlanta Women’s Club at 1150 Peachtree St.; and the Rufus M. Rose House at 537 Peachtree St., which currently is boarded up – begging to be preserved.

Also, the buildings that once housed the Pleasant Peasant and Mick’s Restaurant in the 1970s also need to be preserved and given a new purpose.

Then there’s the Medical Arts Building, which has been vacant for years and years. Although plans exist to turn the building into a hotel, nothing appears to be happening. At least it is listed as a “Landmark” by the city of Atlanta, and its façade is owned and protected by Easements Atlanta. 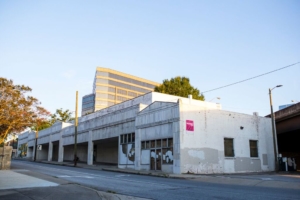 “Rhodes Center South is one of the oldest strip shopping centers in the state of Georgia,” McDonald said. “I don’t think it has Landmark status. But that needs to be a priority.”

The strip shopping center used to include the Rhodes Theater, but the buildings have been vacant for years. McDonald is concerned the buildings, which are owned by developer John Dewberry, are suffering from “demolition by neglect.”

That said, McDonald said the Georgia Trust “is willing to help anyone who wants to rehabilitate these building by using historical tax credits,” he said. “These are powerful incentives.”

Preserving historic structures helps make Atlanta a more enticing city. The architecturally significant intersection of Peachtree and Ponce  – with the Fox Theatre, the Ponce de Leon Apartments and the Georgian Terrace – shows how preservation can anchor a city.

The boarded up Rufus M. Rose mansion on Peachtree (Photo by Kelly Jordan)

Tim Keane, the city of Atlanta’s planning commissioner, recently said the city must preserve the precious few historic buildings it still has.

All the more reason for the city of Atlanta to give these Peachtree treasures “Landmark” status. We need to  reinvigorate our historic fabric – not just by saving our oldest buildings but by filling them new life and vibrancy.

It’s time to preserve our past along Peachtree. 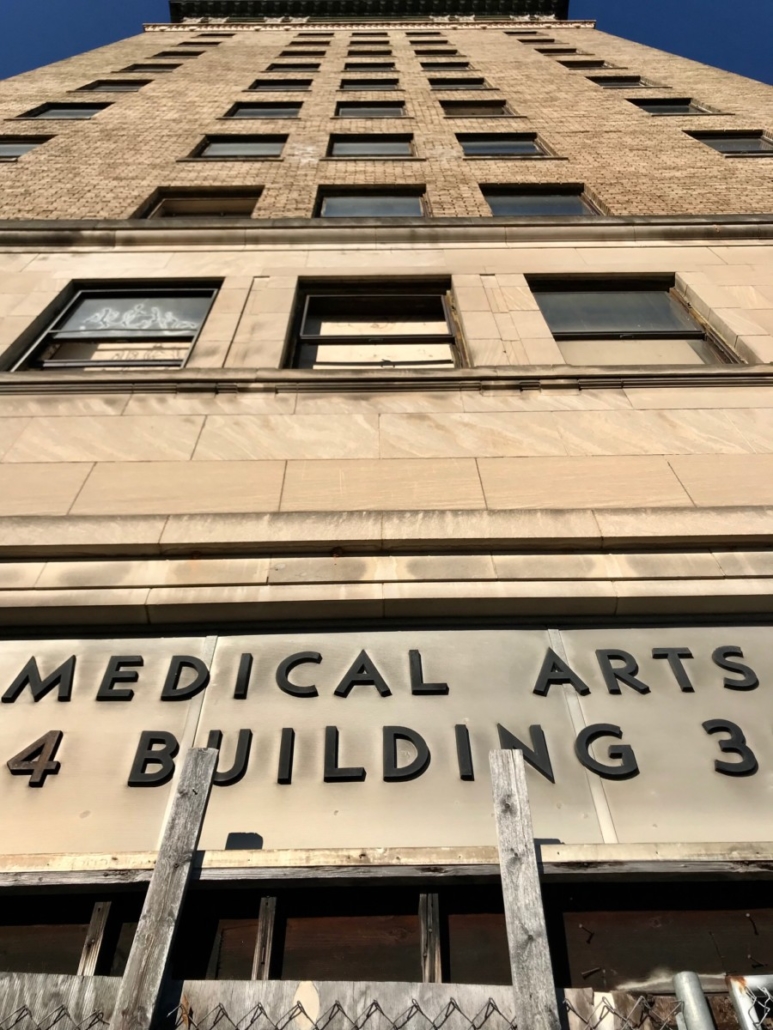 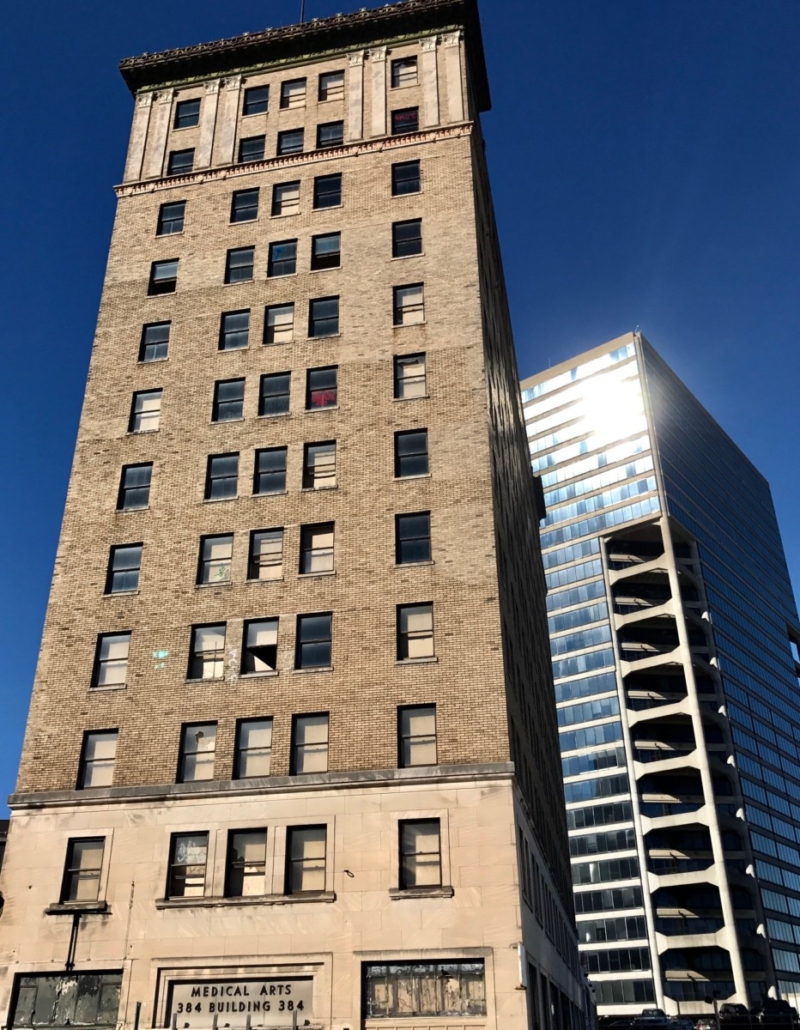