This past Friday, U.S. Secretary of the Interior Ken Salazar made a historic announcement — for the first time ever, his department will hold competitive lease sales for the purpose of offshore wind energy development. The two areas being leased are off the coasts of Massachusetts-Rhode Island and Virginia.

In the press release, Salazar explained: “Wind energy along the Atlantic holds enormous potential, and today we are moving closer to tapping into this massive domestic energy resource to create jobs, increase our energy security and strengthen our nation’s competitiveness in this new energy frontier.”

And yet, the clock is ticking down for Congress to extend critical tax credits for wind power. Both the renewable energy production tax credit and the offshore wind investment tax credit are set to expire Dec. 31, and they seem likely to be pulled into the political wrangling as we near the so-called fiscal cliff.

Throwing wind power over the fiscal cliff could have serious negative implications in Georgia. The 2010 National Renewable Energy Laboratory (NREL) Assessment lists Georgia’s offshore wind resource at 60.4 gigawatts (GW) within 50 nautical miles of the coast, in other words several dozen power plants worth of power waiting to be tapped. 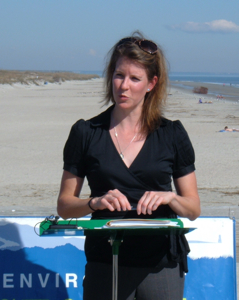 An Environment Georgia Research and Policy Center report released last week documented the environmental benefits wind is already delivering in states around the country. The report found benefits to air quality and reductions in global warming pollution but perhaps especially interesting in drought prone Georgia are the water savings.

The 120 million megawatt-hours (MWh) of wind electricity (which powers nearly 13 million homes) produced in 2011 saved 26 billion gallons of water, more than enough to meet the annual domestic use needs of a city the size of Boston.

Recent news highlighting low water levels in Lake Lanier have brought home the growing severity of the current drought in Georgia. And power plants are major water guzzlers that don’t let up, even in times of drought.

The 2011 Georgia Water Coalition “Dirty Dozen” Report identified Plant Hammond on the Coosa River as a major river threat — in times of drought the plant’s withdrawal of 590 million gallons of water a day cause the river to run upstream below the intake pipe.

The most recent “Dirty Dozen” included the Savannah River where the Southern Co. is constructing two new nuclear reactors at Plant Vogtle. The proposed reactors are expected to require up to 75 million gallons more a day from the Savannah River — the existing and new reactors could consumer enough water to supply over 1.1 million Georgians with drinking water.

Taking advantage of our wind potential could not only benefit our rivers and water supply, it could also have benefits for Georgia’s economy. NREL predicts that reaching the Department of Energy’s (DOE) goal of 54 gigawatts of offshore wind power would generate $200 billion in new economic activity while creating more than 43,000 permanent, high-paying jobs in manufacturing, construction, engineering, operations, and maintenance.

Even with minimal existing wind capacity, Georgia has a growing wind manufacturing sector, including ZF Wind a turbine manufacturer in Gainesville, GA.

In September, ZF Wind’s Elizabeth Umberson told the Gainesville Times that uncertainty about the tax credits had already caused cuts. “We were supposed to be at full production levels, with a staff of 250, and we’re at 160 today,” she explained.

Umberson also pointed out that the nuclear and coal industry benefit from permanent subsidies built into the tax codes. These subsidies have been in place for decades and yet, wind turbines are creating energy at competitive prices.

Georgia should be taking full advantage of the benefits that wind energy can bring for our water resources and our economy. First, Georgia’s U.S. Congressional delegation should work to make sure the tax credits, that will help the industry grow in Georgia and beyond, are renewed today.

Second, Gov. Nathan Deal should take steps to add Georgia to the Atlantic States Offshore Wind Consortium. We continue to be one of the few states with Atlantic wind potential not currently part of this Consortium, which is designed to make wind development off the Atlantic Coast more efficient and coordinated.

We know that clean energy is growing local economies, adding jobs and creating a cleaner future for Georgians. We should continue to invest in its success.