The week in news.

Last year, the company sold its iconic CNN Center in downtown Atlanta, but WarnerMedia will lease the building for at least five years. 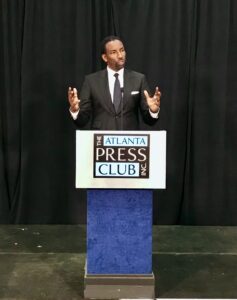 The Atlanta Press Club will host debates for the primary runoff election races for some statewide and federal offices on June 6.

Part of the Loudermilk-Young Debate Series, the debates will include candidates for party nomination in the races for secretary of state, lieutenant governor; the commissioners of insurance and labor; and Congressional Districts 2, 6 and 10.

The primary election is scheduled for June 21, with early voting starting June 13.

The debates will be available on livestream and on-demand video on the Press Club Facebook page and the website of Georgia Public Broadcasting (GPB). GPB also will broadcast the debates in the races for secretary of state and lieutenant governor. The debates will not have any in-person public attendance.

The following are the details of when and where to watch each debate. The named candidates were invited to participate but some might choose not to appear.

Atlanta police have made four more trespassing arrests in recent weeks at the site of the controversial public safety training center, where a “temporary” perimeter fence is in the works.

The Atlanta Police Department (APD) raided the site on Key Road in DeKalb County on May 17 to remove “Defend the Atlanta Forest” protesters camped there, arresting seven. Since then, APD has charged four more people with trespassing there, Interim Police Chief Darin Schierbaum said at the May 31 meeting of the Community Stakeholder Advisory Committee (CSAC).

Schierbaum described two of those arrested as protesters and the others as people “who just happened to enter” the area and engaged in “criminal mischief.”

Protesters are driving security concerns that the Atlanta Police Foundation (APF), the nonprofit leading the facility’s planning, is saying requires secrecy about construction information — even information that is already public record. The CSAC, which was formed by the Atlanta City Council to review the project, has not challenged the secrecy. Instead, much of the May 31 meeting was about an attempt to remove a skeptical member.

APF also has claimed that the protests could force unwanted, unilateral changes to the design, including a perimeter fence. As reported by the Atlanta Community Press Collective, a group of writers who oppose the facility, APF applied for a permit to erect a temporary eight-foot-high, barbed-wire-topped fence around the site. That move was not discussed by the CSAC and APF did not respond to a question about it following the May 31 meeting. 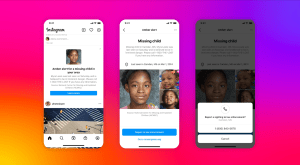 An example of the new AMBER Alerts on Instagram. (Photo courtesy of Meta/Facebook.)

On June 1, Instagram announced a new safety initiative for its app, AMBER Alerts.

AMBER Alerts are used by law enforcement to notify community members of a missing child. These alerts are shared via text message and don’t include an image.

Now, local AMBER Alerts will show up on Instagram users’ feeds, including a photo of the child, any available information and a link to quickly contact local law enforcement. Users can also reshare the alert.

Account-holders will only see the AMBER Alerts if they are within the designated search area.

Facebook rolled out this feature in 2015, which has aided in the rescue of hundreds of children, according to Meta, like the Massachusetts couple who helped save an 11-year-old after they saw the AMBER Alert on Facebook.

“Instagram is a platform based on the power of photos, making it a perfect fit for the AMBER Alert program,” said President and CEO at the National Center for Missing and Exploited Children Michelle DeLaune, a partner in this initiative. “We know that photos are a critical tool in the search for missing children, and by expanding the reach to the Instagram audience, we’ll be able to share photos of missing children with so many more people.”

The official ribbon cutting of the Atlanta Blockchain Center, a first-of-its-kind innovation hub, will occur on June 13.

The center will provide a learning incubator and coworking space to cultivate entrepreneurship, inclusivity and education through a decentralized autonomous organization (DAO).

The center’s goal is to be a global tech leader and early adopter of blockchain and focus on building an inclusive community that will birth future leaders and entrepreneurs.

Membership, weekly seminars on NFTs and cryptocurrencies and standard amenities like conference rooms, free Wi-Fi, coffee and snacks will be available to use at the center.

The event will be from 6 p.m. to 8 p.m. and membership is free. To participate, register on Eventbrite.

To celebrate Men’s Appreciation Month, Fearless Fund, which generally invests in businesses owned by women of color, is awarding two grants for $10,000 each to help men grow their businesses.

The organization says that they understand the vital role that Black fathers, brothers, husbands, and friends play in the economy and within their own families and communities.

Applicant eligibility, including a Black male owner over age 18 who operates in the U.S., is required for consideration. 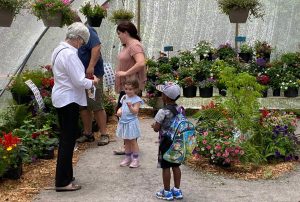 Grab a nectar stick and head into the butterfly encounter at this weekend’s Butterfly Festival. (Photo courtesy of the Chattahoochee Nature Center.)

This weekend, get close and personal with our colorful pollinators at the Chattahoochee Nature Center’s 23rd annual Butterfly Festival.

The two-day festival — from June 4 and 5 — will include live encounters with hundreds of native butterflies, presentations from pollinator experts and a native plant sale.

Those wanting to get close and personal with the butterflies should check out the encounter — hosted in a mesh tent — and folks can also hold a nectar stick to bring the colorful insects even closer.

Tickets are $15 for the public and $12 for members. Click here for more about the upcoming Butterfly Festival.

Gov. Brian Kemp has named a new member of the board of the authority overseeing the redevelopment of Fort McPherson in Southwest Atlanta.

Cathleen Richardson is an Apple executive who works in educational technology. She was appointed May 13 and will serve through 2026.

She joins two other recent appointments to the board. Atlanta Board of Education Chair Eshé Collins and real estate executive Audra Cunningham were named in April.

The executive order naming Richardson says she is taking a seat previously held by Shuntel Beach. But Cunningham actually holds that seat. Governor’s Office spokesperson Katie Byrd said that Richardson is taking another seat and the order’s language was a staff error that will be corrected. 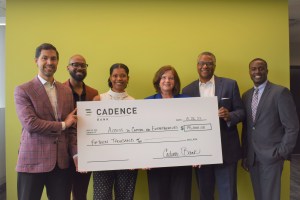 Access to Capital for Entrepreneurs (ACE), a nonprofit and community development financial institution, recently received a $15,000 gift from the Cadence Bank Foundation.

ACE will use the funds to provide loans, coaching and networking opportunities to help clients build and grow sustainable businesses that create jobs.

“We’re honored to have Cadence Bank as a partner to make affordable capital available to entrepreneurs,” ACE CEO Grace Fricks said in a press release. “This funding will enable business owners of color to not only be better equipped to expand their businesses but to also build assets and create jobs. It’s this ripple effect of support that fuels successful business growth and strengthens families and communities.”

ACE serves 68 counties in Georgia, including all of metro Atlanta and North Georgia, providing affordable loans and resources to small and medium businesses. In its 25 years, ACE has provided more than $137 million in loans and services to support over 2,000 small business owners, helping create or retain over 14,000 jobs in Georgia.

Cadence Bank supports individuals, families and small businesses in underserved areas by offering financial support and services, like loans to small businesses and partnerships with local nonprofits to invest in the community.