Georgians, it’s time to fill out your ballot for the final time this year. Early voting is currently underway for the U.S. Senate runoff race between incumbent Democrat Raphael Warnock and Republican Herschel Walker. Election Day is Dec. 6. Click here for election information specific to your county.

On to other recent news from around the city: 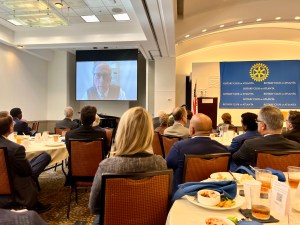 Sam Nunn weighs in on Ukraine, Russia and nuclear states

Sobering. That was the general reaction by the Rotary Club of Atlanta on Nov. 28 after former U.S. Sen. Sam Nunn (D-Georgia) gave the group his assessment of the state of relations between the United States, Russia and other countries holding nuclear weapons.

Nunn, who spoke via a video feed because he had Covid, is co-founder, co-chair and strategic advisor of the Nuclear Threat Initiative, an organization that was founded in 2001 by Nunn and Ted Turner, a media mogul, philanthropist and environmentalist. During his time in the Senate, Nunn chaired the Senate’s Armed Services Committee, and he was a widely recognized leader who sought to reduce the global threat of nuclear weapons.

“Russia’s invasion of Ukraine is a lose, lose, lose for everybody,” Nunn told Rotarians, adding that it was “devastating” for Ukrainians, and “destabilizing” to all of Europe and the rest of the world.

Nunn also said the invasion “has increased nuclear risk to the highest level since the Cuban Missile Crisis,” and it has accelerated the tendency of other countries to want to develop their own nuclear weapons.

Russian President Vladimir Putin misjudged the strength of Ukraine and the backlash he has faced in the wake of the invasion, which has only strengthened the relationship between the United States and its NATO allies.

Nunn commended President Joe Biden on how he and his administration has handled the situation.

“What the Russian military has recognized is that while Russia can destroy Ukraine, it cannot own it, or peacefully occupy it,” Nunn said. “Putin can’t find a way to back away from the conflict and the occupation without losing his job or his head, so to speak.”

Nine countries are nuclear weapon states, and leaders in those countries need to be rational and avoid direct military conflict. That is particularly important for the United States and Russia, which control 90 percent of the world’s nuclear weapons.

Nuclear states must understand their responsibility “to protect not only their own countries but to protect God’s universe,” Nunn said. “That’s what’s at stake.”

“We are witnessing the influence of two Spelman alumnae and the legacy work of their grandson and son, Spike Lee. We are proud to lay claim to some of their aspirations and impact on Spike through their experiences in this very place during their matriculation at Spelman,” said Dr. Helene Gayle, President of Spelman College.

The all-women institution is ranked No. 51 among all liberal arts colleges and No. 1 among all Historically Black Colleges and Universities by U.S. News and World Report.

Today we celebrated the legacy of Zimmie Retha Shelton, C'29, and Jacquelyn Shelton Lee, C'54, by dedicating the Admissions Office at Spelman in their honor. Ms. Shelton and Ms. Lee are the grandmother and mother of award-winning director Spike Lee. pic.twitter.com/HHpEQxciyu 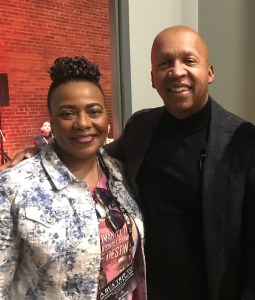 Bernice King, CEO of the King Center, with Bryan Stevenson of the Equity Justice Initiative on Feb. 29, 2020 in Montgomery. (Photo by Maria Saporta.)

The King Center has announced several events for the King holiday week in January to commemorate what would have been the 94th birthday of Martin Luther King Jr.

The federal King holiday will be Monday, Jan. 16 — one day after King’s actual birthday. The theme of the 2023 holiday activities will be: “It starts with me: cultivating a beloved community mindset to transform unjust systems.”

Among the signature events will be the Beloved Community Global Summit, the Jan. 14 Beloved Community Awards — formerly the Salute to Greatness Awards Gala — at the Hyatt Regency, and the official Martin Luther King, Jr. Beloved Community Commemorative Service (BCCS) at Ebenezer Baptist Church featuring keynote speaker Bryan Stevenson, founder and executive director of the Equal Justice Initiative in Montgomery, Al. The service will be open to the public and also broadcast and streamed.

A group of distinguished leaders will receive this year’s Beloved Community Awards, including Dolly Parton, a Grammy Hall of Fame inductee who is a longtime education advocate, philanthropist and entertainer. She will be honored in absentia.

The Martin Luther King Jr. Center for Nonviolent Social Change was established in 1968 by King’s widow, Coretta Scott King. The King Center is the official living memorial and programmatic nonprofit organization committed to educating the world on the life, legacy, and teachings of Dr. Martin Luther King, Jr.

Activists with the “Defend the Atlanta Forest” and “Stop Cop City” movements are planning a protest rally and march in East Atlanta on Dec. 3.

It’s the latest gathering by protesters opposing Atlanta’s public safety training center and a controversial DeKalb County parkland swap on issues of policing reform and environmentalism. The “Stop Cop City” protest movement aims to defend what it and other groups call the Weelaunee Forest, based on what they say is the Native American Muscogee Nation name for the nearby South River. The forest includes the proposed training center site on DeKalb’s Constitution Road, which protesters have dubbed “Cop City,” and a nearby 40 acres of parkland given to developer Ryan Millsap in a land swap that is under challenge by a community lawsuit. The training center’s lead planner, the Atlanta Police Foundation (APF), says the facility is needed for efficient training and morale-boosting of police and firefighters.

The Dec. 3 event is scheduled for 10 a.m. at Brownwood Park at 607 Brownwood Ave. According to a press release, it will include a rally, a march, lunch and “a teach-in about the history of the land and the movement to defend Weelaunee Forest.” Speakers will include “children, scholars and local residents.”

Ongoing for more than a year, protests have often been peaceful and legal, while others have involved trespassing and vandalism in the forest and at the offices of APF and the training center’s contractors. Protesters have recently organized a phone-calling campaign urging the contractors to withdraw. 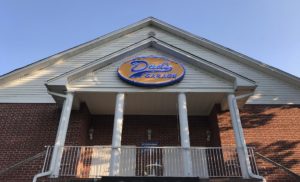 This month, Dad’s Garage is getting in the holiday spirit with “Invasion: Christmas Carol.” The performances blend Charles Dickens’ scripted play with improv comedy.

In this unique retelling of “A Christmas Carol,” each performance is “invaded” by a character who is a surprise to the cast and audience. From there, the cast is tasked with integrating the new cast member into the storyline.

The theatre is also offering special shows for select days, including:

As part of the award, both organizations will receive a $200,000 grant over two years, comprehensive leadership training for the executive director and join a network of peer organizations. Since 2004, the Bank has invested a total of $7.6 million into 38 Atlanta nonprofits through the Neighborhood Builder program.

ATC is an auto repair shop that teaches at-risk youth technical skills. With this grant, the organization will purchase a new facility and additional equipment to increase training capacity.

East Lake Foundation partners with local public and private organizations to enable Atlanta’s East Lake residents to thrive, using a model of community revitalization that includes mixed-income housing, educational opportunities and community wellness. The nonprofit will use the new funds to support The Trust at East Lake, a new affordable housing development in partnership with the Atlanta Land Trust.

“Nonprofits are the backbone to our local community…” Bank of America Atlanta President Al McRae wrote in a press release. “It’s important that we direct not only capital but the necessary resources and training to help position these nonprofits and their leadership team for long-term success as they grow strategically and make a positive impact.” 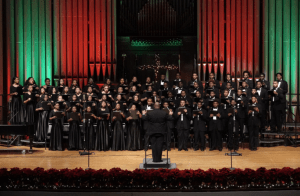 This weekend, Morehouse and Spelman Colleges will provide evenings of song and festive cheer with a three-night performance of their 96th annual Christmas Carol Concert, held Dec. 2 to 4.

The shows will take place Friday and Saturday at 7:30 p.m. and Sunday at 6 p.m. at Morehouse’s Martin Luther King Jr. International Chapel.

“This concert is a joint tradition that allows us to gather our voices and present a collaborative concert with a remarkable sound and feeling to our audience,” said Dr. David Morrow, Director of the Morehouse College Glee Club.

“This year we are eager to showcase our music mastery as a special gift to appreciate our Atlanta community that has continued to support both institutions and musical ensembles,” said Dr. Kevin Johnson, Director of the Spelman College Glee Club.

The shows are free to the public and will be accessible through both schools’ YouTube channels.

The Georgia Trust for Historic Preservation has announced three recipients of a total of $10,000 in matching grants for three rehabilitation projects around the state.

The annual Callahan Incentive Grant program funds preservation projects by nonprofit or governmental organizations for projects at sites that are listed, or eligible for listing, on the National Register of Historic Places. This year’s recipients include: 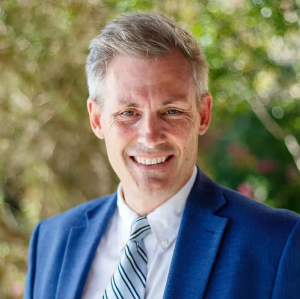 Marist School, an independent Catholic school in Brookhaven, has hired the first lay president since its 1901 founding.

James D. Childs was announced this week as president effective July 1, 2023. He will succeed Rev. William Rowland, who is a member of the Society of Mary, the order that founded Marist.

Marist says the switch to non-clergy leadership was “inevitable” due to a long-term decline in men seeking to enter the priesthood. The school has been preparing strategies to maintain its religious education with lay leadership.

An Indiana native, Childs is currently president of a Catholic high school in Oakland, California and has led and taught at other Catholic schools.

“I couldn’t be more excited and honored to be joining a community dedicated to Catholic education with such a rich history and tradition of excellence,” Childs said in a press release.

The school has an enrollment of about 1,100 boys and girls in grades 7 through 12. It was founded in Atlanta and in 1962 moved to its current home at 3790 Ashford Dunwoody Road in what is now the city of Brookhaven.

The Rotary Club of Atlanta unanimously approved its leadership slate for 2023/2024 at its Nov. 28 meeting.

The president will be John Yates, a law partner at Morris, Manning & Martin. The president-elect will be Adrian Cronje, CEO of Ballentine, a wealth management firm.

Kathy Waller, executive director of the Atlanta Committee for Progress, will serve as secretary. Other key roles include WABE’s Jennifer Dorian serving as program chair and Dan Gordon of Jabian Consulting as membership chair. Stephanie Blank, the 2022/23 president, will serve as chair.